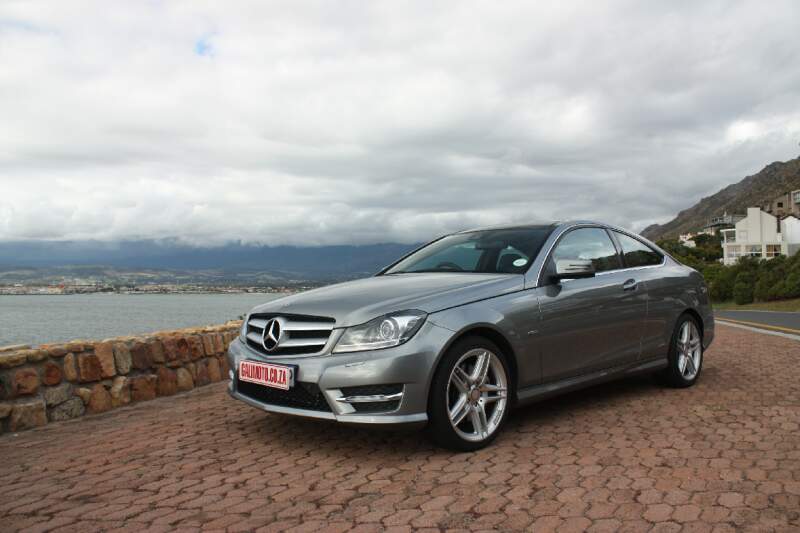 The most successful Mercedes-Benz model has long been the C-Class so it was obvious that the Stuttgart brigade would capitalise on its fame. After estate versions, they’ve produced two coupés over the years but, in my humble opinion, this third generation is the first winner.

The first C-Class coupé only made its appearance beside the second generation sedan at the beginning of the new millenium. That sleek ‘n stubby number was immediately christened the “Sports Coupé” and was mildly face-lifted to slot in with third C-Class of 2007.

CLC was given some new lights, a nip here and a tuck there, but where both these generations failed is that, from the nose backwards, they looked nothing like their sedan siblings. Some people embraced this individuality but I always found the C-Coupés too short, too compact, sorta like a 1-Series coupé.

After big brother C-Class’ recent facelift, the oven-fresh C-Coupé you see on this page is a 100% direct relation – no doubts about the milkman any more. Parked next to its four-door donor, the cars show off almost identical exterior dimensions, lights and proportions.

The major difference between your shiny new coupé and your neighbour’s sedan is that the two doors are longer, stretching the car’s profile lower and longer. Window line and c-pillar are more elegant and taper towards a shorter boot lid – signs of a decent coupé mould and no more of that split hatchback nonsense.

The new 7G-Tronic PLUS auto’box helps to bring fuel consumption down to a claimed 7L/100km. “Eco”, the first of three driving modes may help you with that, but select “Sport” or “Manual” and be prepared to use between 10 and 13L/100km.

The seven cogs swap cleanly but not as fast as a DSG; you can also just change one gear at a time, except when stomping onto the kick-down button. Do just that and the C350 leaps into action with vigour and a meaty, almost Nissan/BMW six cylinder growl. It’s lovely.

Its ticking idle noise isn’t very pleasing, nor is its cheap plastic engine cover. Listen up, ALL manufacturers – can we please drop the plastic craze and make beautiful, naked engines again? Thank you. But the engine’s grunt and response are amazing – even if Eco mode likes to potter around all day at 1,200rpm.

For reasons unbeknownst to me, the shift paddles on the chunky, multi-function, flat-bottomed steering wheel didn’t always respond as quickly as the Benz’ side-to-side gear lever. Yes, even in Manual mode. The brakes are better behaved and although initially quite sharp, didn’t fade or lack feeling at speed.

Our test unit featured an optional AMG kit (N$28,200) which beefs up the suspension and tyres, adds lots of sporty goodies to the inside and a body kit to the exterior. The ride is quite choppy at slow speeds, the steering’s very direct, although both ease up at highway speeds.

There are tons more to choose from and you best consult your dealer for an options lecture but I would highly recommend this car’s Intelligent Light System (N$12,300). Not only does it bi-xenon the darkness into submission, it also puts on a small choreographed dance for everyone’s entertainment when it starts up.

I thoroughly, thoroughly enjoyed my time with the C350 Coupé, happily topped it up with hundreds of Dollars, drove to every event/person/venue I could think of and even considered faking an infectious disease in order to retain possession for a few more days.

I should also mention that almost everyone gave the car a second glance. Then a third and often a fourth. Some people wanted to trade cars or nick it, eventually admitting that they simply have to have a C350 Coupé. I am also one of those people – and that never happened with the previous coupés.