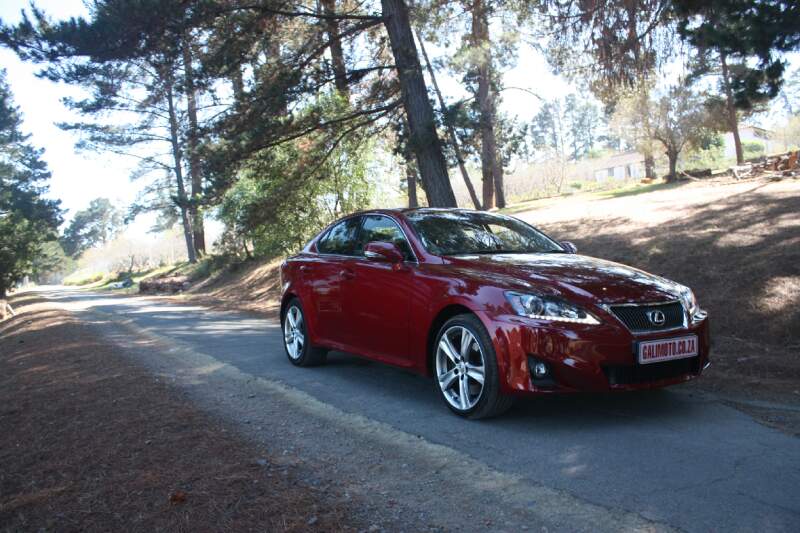 Performance sedans have become a bit of a rarity and especially entry-level candidates like the Jetta CLi and Corolla RXi were callously shoved off the scene by their popular hot hatch equivalents. The new entry now starts with hasty mid-size luxury saloons; like the Lexus IS350.

Lexus, in case you didn’t know this, is Toyota’s luxury division which retains the donor’s principles of value, versatility and reliability but is pimped up with luxury, sophistication and style. This also goes for the exquisite customer experience that has no equal – Lexus owners are treated like royalty.

Other posh brands would do well to copy this strategy and stop accusing Lexus vehicles of being facsimiles. Much like the Chinese right now, early versions were shamelessly close to duplication but Lexus found its groove, its identity and other people’s customers quite quickly.

Some say the company has no pedigree and their cars are just fancy Toyotas; and they wouldn’t be far off. However; since its inception in 1989, Lexus and their high-spec vehicles have been causing turmoil in the American and international markets. S.A. saw its first official Lexus in July 2006.

At which point, the snazzy IS250 was a year old and making some waves. I remember my first encounter well, at first admiring its taught, beautiful shape and huge wing mirrors before exploring the luxurious, high-tech interior. The day ended with me clinging on for dear life in sheer disbelief at the car’s grip levels.

Over the years, Lexus improved and extended the range with differing specifications, a convertible for your beach house and the IS-F for scaring your neighbour’s kids. The base IS250, while offering a decent 153kW, could’ve done with a little more power to exploit that amazing chassis.

The claimed average fuel consumption of 9.4L/100km seems possible but our metallic ruby red IS350 often helped itself to 11 or 12L/100km around town. This wasn’t always the car’s fault though, it easily dipped under 10 on the highway but its power reserves are just too tempting to ignore.

Bury your foot and the 350 rockets off with a subdued V6 snarl, the six-speed automatic gearbox shifts cleanly and corners become quite addictive. The Lexus has unbelievable grip and will only let go with insane provocation, at which point the stability control steps in gently and pulls everything right again.

The gearbox can be a bit indecisive at slow speeds and although it won’t shift up in Sport / manual mode, it disobeys mid-gear orders by kicking down whenever it wants. Big wheels and firm suspension make the car a bit jittery at slow speeds but never at an uncomfortable level – the IS350 remains composed.

The brakes are equally impressive and helped by down-shifts, bringing the car back to a quiet and refined cruise which it also does exceptionally well. There aren’t many compromises or shortfalls, so the Lexus IS350 is a fine example of the rare sports sedan.

My only critique is its age. Although I believe that this car aged beautifully, there are signs that it’s due for replacement. But seeing that I really approve of the IS350 (& Co.), perhaps my criticism can take the form of suggestions for the next generation IS; which is probably done already.

Dear Lexus, you won’t believe the amount of snorting laughter your 1982 Toyota clock had to endure. Can it. Most peeps liked the stubby dashboard but some proclaimed the wood (and/or leather) to be slightly fake. The touchy-feely display works well but the overall centre console layout is a mess.

Head-room could be better and the rear seats need more than a ski shoot. Some switchgear still smelled of Toyota while the following items are so amazing that they shouldn’t be messed with at all: the instruments, climate seats, turning circle, fluffy sun visors, 6-CD audiophile hi-fi, lights, engine and that incredible chassis.

IS350 is offered in two spec levels at N$499,700 and N$548,600, both with a 4-year/100,000km warranty and service plan. The pricier model gets dirt-proof grey 18” rims, moon-roof, rear sunshade, rain sensors and electric memory features on top of hdd navigation, reversing camera, Bluetooth, keyless entry and ignition, to name but a few.

Even in the twilight of its life, the IS350 is properly impressive and embodies the sporty sedan almost perfectly. If you can live with its few wrinkles it will prove to be a great all-rounder, good value and consistently rewarding. It also represents a pre-owned treasure, if anyone’s stupid enough to sell theirs.