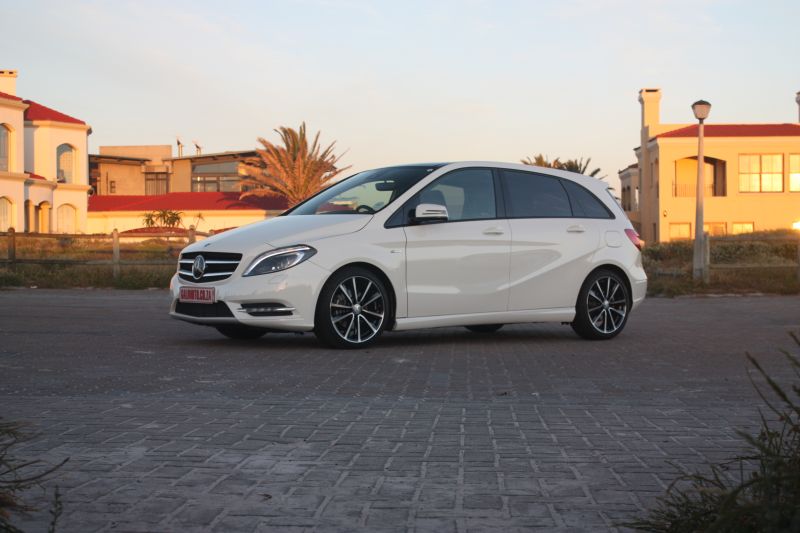 For today’s review I’m delighted to tell you that our test subject was one of my least favourite automobiles ever and managed to swing that opinion almost 180 degrees within a week. I don’t like hate, it comes with so much guilt and anger, thus I’m eager to share my joyful experiences with you.

The previous B-Class never made sense to me, it was just a larger version of the current A-Class but not large enough (e.g. seven seats) to differentiate itself. A Mercedes exec at the B-Class launch finally explained their cunning new plan to me and it makes wonderful sense now.

Next year (2013) will see the launch of an exhilarating, dynamic, youthful A-Class which moves away from the MPV concept and into the midst of edgy hatchbacks like 1-Series and Golf. The new B-Class you see here was designed to retain and capture clients who prefer the previous A-Class or B-Class MPV design.

They even thought of most potential customers so the upcoming A-Class will (apparently) be available as a sensible Diesel or crazy AMG; and everything in between. This new B-Class offers a similar selection to cater for everyone from your parents to your lead-footed brother-in-law.

Our press demonstrator was the range-topping B200 BlueEfficiency turbo-petrol with some youthful bits slapped onto it. These are, in no particular order of coolness, the “Night Pack”, “Sports Pack” and “Exclusive Pack”, as well as intelligent light system, COMAND Online and a few other goodies.

Despite all these, my first drive left me completely cold and rather annoyed. Not just because someone had nicked most of the fuel but due to the car’s weird looks and lethargic gearbox. Even the trendy white paint, brown and black leather, two-tone wheels and snazzy lights couldn’t convince me – it looked a bit squashed.

As for the gearbox, that just did whatever it wanted and seemed completely disconnected from my right foot, stuttering around at 1,200rpm in its stupid ECO mode. Switching ECO mode off simply stopped the automated start/stop system while Sport mode meant driving everywhere at 4,500rpm.

It wasn’t until late in the day when I jumped into the B200 to get to a looming appointment. This must’ve been turning point one as the car looked amazing just before sunset. Next to impress was the sturdy interior with its curved dashboard, retro/SLS vents, matt wood finish and crisp displays.

Once I’d cleared traffic and in a last attempt to extract obedience from the Merc, I selected the gearbox’ final mode, Manual. Oh Emm Gee. The previously annoying and defiant device suddenly turned the car into a responsive machine which was, believe it or not, fun to drive.

The new double-clutch seven-speed gearbox isn’t as fast as those in competing brands, nor will it allow you to hit the rev limiter, but it is unbelievably better than its other two modes or previous Merc auto-boxes. In this state, you get to experience most of the 1.6L turbo-petrol engine’s 115kW (156hp) or 250Nm.

Spirited driving will decimate your fuel consumption and we eventually achieved an average of just under 9L/100km. Mercedes claims around 6L/100km and CO2 output of just 144g/km which may be plausible in the sluggish ECO mode. Put foot again and 100km/h comes up in 8.6 seconds (we got 8.9) with a top speed of 220km/h.

The Sport pack, which I honestly thought to be just cosmetic, was probably even more impressive as it allowed rather feisty cornering. Yet again, this car won’t keep up with the latest hot hatches but it will give their drivers a decent fright and entertain its own pilot with responsive handling.

The downside of this is a very choppy ride in town (especially by Mercedes standards) and quite a bit of road noise from those fat tyres. On the upside, our B200 exhibited a lively steering mechanism, impressive braking capabilities and not a single rattle or squeak from its cabin.

More optional goodies which delighted were the Harman/kardon sound system and active Xenon lights, which are superb once you switch off the meddlesome high-beam assist. Merc’s second-generation Distronic Plus radar-guided cruise control works flawlessly and even brings the car to a complete halt in traffic.

You may not want some of these pricey gadgets as ours added N$96,700 to the base price of N$319,600. The great news is that a lot of stuff is standard (passive and active safety systems, infotainment and convenience) and there are four models to choose from – B180 petrol and diesel, B200 petrol and diesel.

Each B-Class is sold with a 1-year warranty and 6-year/120,000km maintenance plan, the choice of ten colours and a horde of options to jazz it up. As a previous B-Class owner (yay, I finally met one!) confirmed, these choices and the upcoming A-Class provide a front-wheel-drive Mercedes-Benz for every taste.