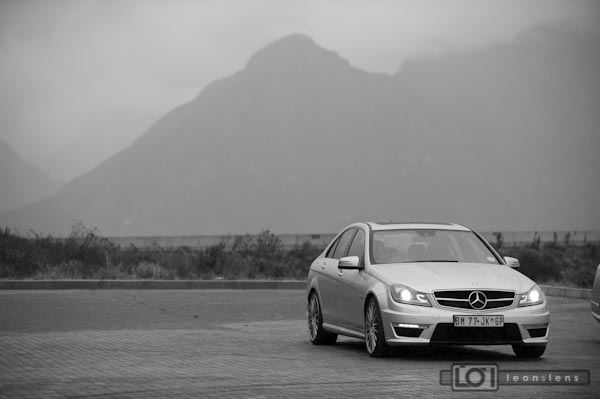 Did you know that all French people are rude and every Portuguese owns a corner café? Germans have no sense of humour, Americans are fat and all domestic workers steal sugar, right? None of these stigmas are true, of course, and neither is this one: Mercs are for old people.

Your uncle’s beige 230E may be responsible for this generalisation but consider two things. First off, it shows no sign of ever stopping and secondly, Mercedes devoured tuner AMG in the nineties to infuse their various offerings with some thunderbolt and lightning.

The highly successful C-Class was an obvious target and saw the first official Mercedes AMG collaboration with the C36 straight-six in 1993 and C43 V8 a few years later. C32 Kompressor (supercharged) V6 followed in 2000 with the C55 V8 debuting in 2004; every car adding more power and dynamism, annihilating that ou toppie label.

The third generation C-Class closed the cool and agile gap to its main competitors and AMG shoehorned its 6.3-litre high-revving V8 into the C63, surpassing its rivals’ power outputs. This AMG may not be as pin-sharp as some of its challengers but its aggression and fire power can’t be faulted.

Old person’s car se voet. Your uncle can always opt for a standard C-Class, even in metallic beige, but the C63 AMG is for customers who enjoy clenching their fists, teeth and buttocks. It has massive wheels, bonnet creases, huge bumpers, four gigantic exhaust pipes, a diffuser and super-wide triceps / front wheel arches.

Inside, it’s no different to a high-spec C-Class except for the deep AMG bucket seats, sporty steering wheel with metal shift paddles, brushed and studded stainless steel foot pedals, AMG menu in the trip computer and a four-mode rotary knob for the MCT 7-speed AMG Speedshift automatic gearbox.

Under-the-skin improvements include AMG speed-sensitive steering, high-performance brakes, sports exhaust and sports suspension. The ride geometry does its utmost to balance grip and comfort levels with ¼m wide tyres but first impressions confirm that comfort has taken a back seat.

The C63’s ride is hard, not rock-solid but nothing like a 230E or even C180. The recent facelift and C-Class platform provide immense composure and solidity but this rendition treats all occupants to a rather jittery and bumpy ride. The upside is that the C63 stays glued to the road, unless you start hustling it.

Turn the key and you’ll get a brief bark from that incredible engine. This motor goes as far up as the SLS AMG and never ceases to amaze me with its noise, power and rev-happiness – especially for its big capacity. In this application, prepare to be frightened by 336kW (457hp) or 600Nm.

I don’t think many people will be careful with the C63 AMG, even in its standard “Comfort” gearbox setting the car growls and softly whines through the lower rev range. Bury your foot, choose a different mode and/or use the shift paddles and the little AMG turns into a beast.

In fact, this C63 AMG repeatedly rocketed to 100km/h in under five seconds, once recording 4.5 before our GPS declared the result as inaccurate. In all fairness, also to our brand-new champion, the Jaguar XF-R at 4.8 seconds, our best result matched the Brit and was only trailing by 0.3 seconds (12.5) at the 400m mark.

Low speeds and damp roads will instantly alert the stability control, a dry and level road will be pounded by amazing acceleration at any speed, accompanied by chilling howls from the dual throttle bodies and furious jackhammer noises from the exhaust, turning to loud barks, pops and crackles when you paw the shift paddles.

Throw some corners into the mix and the AMG follows your line cleanly with minimal under-steer. Push too far and the ESP gently tries to rescue your efforts, kill the traction control and get ready for any combination of sliding, smoking, skidding, pirouetting and crashing. Consider yourself warned!

Obviously it’s loaded with satnav, infotainment, comfort and safety features and there are only a few optional extras like the aforementioned hooligan packs. At N$911,180 it’s jolly expensive but includes a 2-year/unlimited-km warranty and 6-year/120,000km maintenance plan.

The C63 is rather insane and somewhat scary. This level of power, noise and brashness would’ve been unthinkable 25 years ago but that’s what makes it so great – it gives Mercedes-Benz something to point at when someone accuses them of building boring barges for seniors.