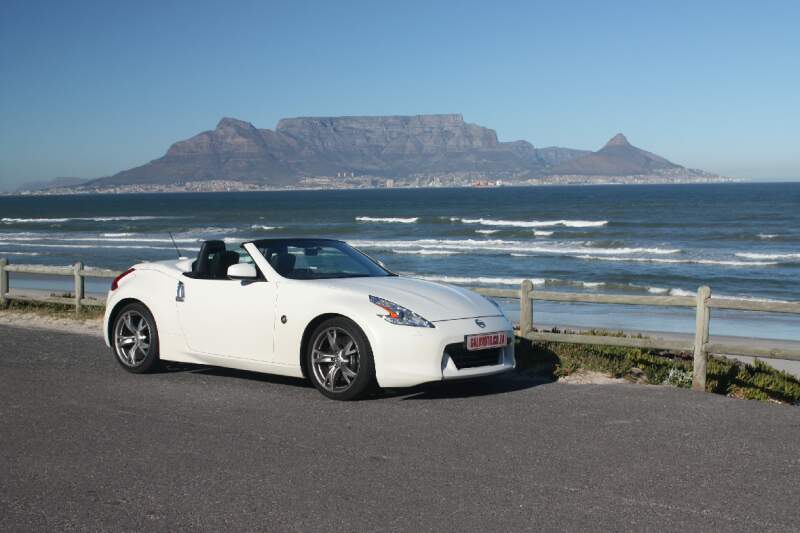 Last year on a drizzling May morning I was silently praying and denting the passenger foot-well of Nissan’s 370Z Roadster as a seasoned motoring journalist took us through a damp Du Toits Kloof Pass, often sideways and one-handed while merrily chatting about modern advertising standards.

The topless version of Nissan’s mid-range brawler had just been launched and completed the local line-up which consists of four models: two coupés and two convertibles available with a six-speed manual gearbox or a seven-speed automatic.

A year or so earlier I tested the 370Z Coupé and concluded that it’s a hard-core machine for borderline masochists. Forget double-cabs and their tough marketing speak, if you want a work-out every time you drive, a 370Z is what you want.

This is especially true if you order the manual version with “SyncroRev Match”; which blips the throttle to the exact engine revs when you shift down. Added to that, the clutch is extremely hard and the gear lever will only cooperate if you apply brute force. It’s brutal.

This are-you-tough-enough attitude suited its aggressive design well. The 370Z isn’t a thing of beauty, there are swooping lights, odd lines and chunky proportions so it’s nowhere near cute, delicate or elegant. It’s the tattooed bouncer in the car park.

Until you chop its sloping roof off and give it a fabric sheet which looks like Meneer Kykjyvirmymeisie slipped into a little black cocktail dress. It’s the same vibe I get from an M3 cabrio – hard-core performance but you can take the top down, darling.

In essence, I don’t have a problem with the concept. The opportunities to abuse a performance car are getting less and less so why not buy a topless version for added enjoyment? Plus, the 370Z Roadster was well engineered and reinforced to keep that dreaded cabrio flex to an absolute minimum.

And seeing that the 370Z Coupé is a strict two-seater, there aren’t any ridiculous cavities masquerading as rear seats or hidden roll-over systems that won’t spoil the car’s lines. No, this Roadster only has two seats with fat roll-over bars behind the headrests.

While we’re on the subject of lines, an open 370Z looks rather interesting because the bulging rear end and super-sized hips have no roof to flow into. I typed “interesting” because not everyone, this author included, was sure about the overall picture. Rest assured that the car attracts a lot of interest though.

The fabric roof sits between the cabin and teeny-tiny boot, opening or closing in 20 seconds, but unfortunately only at standstill. The double-insulated top is well made but generates extra noise in addition to the already substantial road and mechanical noise produced by its host.

My average was hovering in the mid-teens and if I can add two more criticisms, I wasn’t sure about the automatic gearbox or engine note. The gearbox is extremely smooth and quick – with throttle blips and fixed shift paddles (of which the right one obscures the trip computer) – but the demanding manual just adds more sense of occasion.

The engine / exhaust note lacked bass, whirring and droning to an impressive 7,500rpm if need be. The engine is amazingly brawny, slightly unrefined (me likes) and very rev-happy so I’d cure any acoustic shortfalls with an aftermarket exhaust.

That still didn’t stop me from enjoying the 370Z Roadster, especially because it’s rather rare and unique. The driving position is very low, the dashboard has been spruced up by a central touch-screen/nav thingy (N$34,125) and three dials in their own pods give the car a racy feel.

As does the rev-counter which is centrally mounted and blinks at you near the red-line. The temp/fuel and trip meter are quite odd but the rest of the interior is straight-forward, easy Nissan fare. Reasonable materials, good build quality and no surprises, except for the possessive and keyless central locking.

Road manners are as tight and uncomfortable as you would expect from a sports car. Steering feel is crisp and the 370Z Roadster corners with a flat, neutral feeling until you start hustling it and the front starts going gently; at which point the stability systems kick in.  Switch those off and the back becomes rather twitchy.