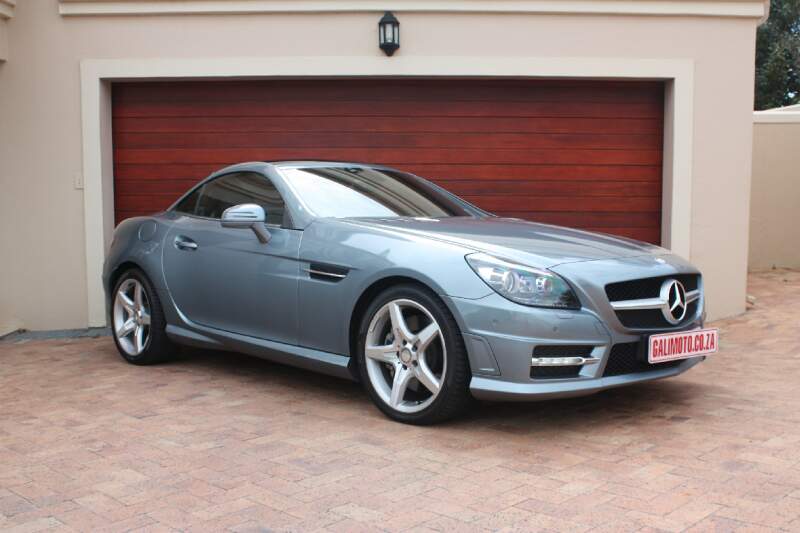 This year’s South African Car of the Year competition had one outright winner, a few middle men and an undisputed loser. Racking up the least amount of points ever was the Mercedes-Benz SLK350, a luxury plaything that looked lost among a sea of affordability and puzzled many by even making the finals.

The mere fact that it made it so deep into the competition means that there must be something about the third-generation folding-metal-roof Merc that impressed a few people. I recently spent a week with a steel blue SLK350 (avec AMG pack) to dig a little deeper and test its everyday behaviour.

My very first conclusion was that the SLK’s looks probably got it that far. The new car was drawn with a more butch, more purposeful stroke of the pen and exudes a chunky aggression from almost every angle. Some didn’t like the plain rear end and I wasn’t sure about its bulbous new nose; and vice versa.

Its sporty seats are surprisingly comfortable and offer salad dish wind deflectors, three-stage heaters and/or neck warmers for any roof-down excursions on a chilly day. Unfortunately, the roof only operates at standstill or very low speeds but it leaves room in the boot for a week’s shopping or two small suitcases.

The thick multi-function steering wheel with shift paddles is slightly over-assisted but very direct in its actions while the rest of the cabin offers plenty of automatic and electrically-assisted controls. Merc’s infotainment system can be commanded from multiple directions but takes a bit of practice.

Power is transferred to the rear wheels via an upgraded 7-speed automatic gearbox with Eco, Sport and Manual modes which goes about its business in a relatively smooth and obedient way. Relatively, because Eco mode can be frustratingly slow, Sport mode alarmingly thirsty and Manual mode occasionally abrupt.

Changes are quite smooth and reasonably quick but more than once the gearbox had a hick-up or power lag between up-shifts and lacklustre throttle blips during down-shifts. Still, get to know the engine/gearbox combination and you quickly become the happiest topless trumpet orchestra conductor on the planet.

Handling-wise, the SLK350 is another example of a modern chassis brimming with computer aids and bags of power. Its ride is surprisingly comfy at everything but very slow speeds, the power is easily controlled by an apt chassis and dozens of sensors but switch those off and you’re in for a wild ride.

Because of the short wheelbase, seating position and plentiful grip, the SLK breaks traction in a snappy manner that requires lightning reflexes. The sensation is slightly unnerving as the computers rush into the scene to offer help and the gearbox is usually napping somewhere on the floor.

Everyday Jill and Joe should be fine if they leave the traction control on and, as mentioned, the SLK350 is incredibly fast, planted and rewarding if you keep within its limits. Blast through a twisty road with bellowing exhausts and witness a fat grin appearing on your visage.

It works well in everyday traffic but gets a (Car of the Year flavour) bullet between the eyes when it comes to its price of N$738,100. That includes a six-year/120,000km maintenance plan but is a lot of dosh for such a small two-seater car, which is why I believe that most people will reach for the SLK200.

The cheaper car is more economical and not much slower on your daily commute or weekly beachfront cruise. An SLK350 looks identical and only has extra grunt and beautiful noise as reasons to spend an extra N$180,000; which I fear few South Africans (or Namibians) will do. As we found out earlier this year, it never stood a chance.