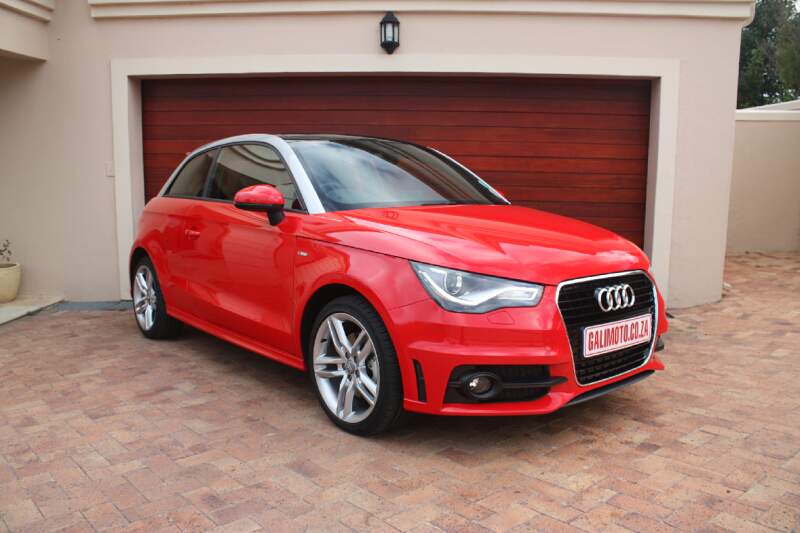 Today I’d like you to meet a small car with a gigantic name, the teeny-tiny Audi A1 1.4T FSi 136kW S-Line S-Tronic. As I don’t intend retyping that novel of a name in every second paragraph, the small German with its big heart will henceforth be referred to as the A1 136kW.

Measuring less than 4m in length and just 1.4m in height, the A1 is an urban commuter’s delight that’s priced far beyond its own segment and into the loving embrace of trendy singles or dinks (double income no kids). It makes no financial or practical sense but brings Vorsprung durch Technik to a cute level.

Its dimensions may be sweet but its styling is aggressive with an angry front end, sculpted profile and smouldering rear end. The interior is no different and greets you with sober blackness, pin-sharp detailing and the solidity of a concrete bunker; although you may choose lighter materials to brighten it up a tad.

A1 136kW towers above its range in terms of looks, specifications and power to give you an idea of what an S1 or RS1 would be like. In my week of driving the little beast, I concluded that any S/RS models would be slightly mental as the 136kW model has already turned all three attributes to 11.

Compared to a standard A1, the S-Line body features bigger wheels, lower and firmer suspension, roof spoiler, broader skirts and bumpers, slashes and louvers. Its power to weight ratio annihilates any siblings and puts it firmly in hot hatch territory while the standard specifications are quite impressive.

The options list is as long as it is expensive and our test unit featured Xenon Plus headlights (N$7,000), cruise control (N$3,200), panorama sunroof (N$10,200), media connectivity pack (N$10,450) and the amazing MMI nav/infotainment unit (N$24,700). It takes a while to comprehend but its operation and design are exquisite.

Space is at a premium in this cabin but it still gives a roomy feel to front passengers, the rear seats are only suited for pets, small children, small-ish teenagers, really small adults or as extra cargo space. The wee 270L boot space extends to an impressive 920L with the seats folded down.

Now for that 136kW nomenclature, which this A1 gets from the maximum output of its incredible engine: a 1,390cc direct-injected, super- and turbo-charged four-cylinder petrol assaults you with said 136kW (185hp) or 250Nm through a seven-speed S-tronic double-clutch automatic gearbox.

Power delivery and response are phenomenal, this A1 borders on overpowered and reels in the horizon at almost any speed in any gear. Give it carrots and the 136 emits a gruff, deep bark and the DSG shifts gears seamlessly and incredibly quickly. It also offers Sport and Manual / tip functions.

My only criticism, which goes for all VW/Audi DSG’s, is that the gearbox can be lethargic and jerky at very low speeds, also because it loves to potter around town at 1,500rpm. However; start using the shift paddles on a mountain pass and it becomes one of the best ‘boxes in the business.

Carve up some corners and that bumpy ride in town suddenly makes sense; the grip levels are impressive with mild under-steer that hands over to the ESP at the limit. Switch it off and you get tyre squeal plus the threat of over-steer; which made me slow down as I didn’t want to explain to the lovely Audi lady why her car’s in bits.

Instead, I grabbed our GPS and achieved 0-100km/h in the claimed 6.9 seconds. Top speed is an alleged 227km/h, average CO2 output just 139g/km and average fuel consumption 5.9L/100km. Are you ready for some incredible news? That figure is no lie and easily achieved or beaten with careful driving.

Our consumption on the open road often dipped under 5L/100km, around town it hovered between 7 and 8, and even two attacks on the aforementioned mountain pass couldn’t tilt 10L/100km. The 136kW is the perfect example of a modern hot hatch – big fun, small thirst.

It may cost N$312,000 and nudge N$400,000 with some decent toys, but I suspect that its stylish and loaded buyers won’t be too fussed about that. It also has a comprehensive maintenance plan but will probably be replaced by something even more overpriced before that expires. Lucky buggers.