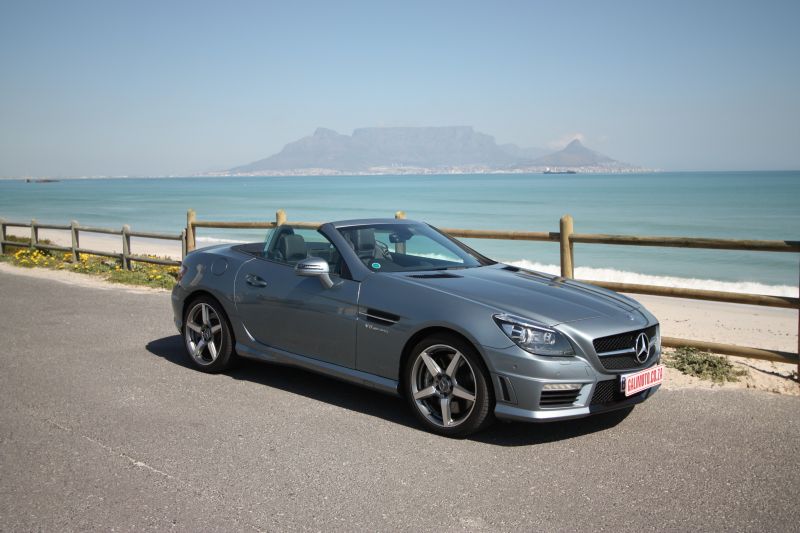 I’m not quite sure who I’m writing today’s review of the Mercedes-Benz SLK55 AMG for… except avid petrol heads and, judging by the few brief sightings of its predecessor, grey-haired gentlemen with a penchant for smooth jazz and traffic light grands prix.

Should this speed-freak’s recipe not be abundantly clear in the accompanying photo(s), let me recap. You simply take a small, two-seater sports car and shoe-horn a big, nasty engine into the thing. This TVR / AC Cobra combination is also hugely popular with any speeding law enforcement agencies.

Considering the engine’s fire power it seems suitable but isn’t exactly understated. I hope it doesn’t scare off too many jazz-lovin’ silver foxes. The interior is equally modern with huge silver surfaces, new instruments and old air vents, big displays and contrasting elements between its quality materials and solid build.

Standard equipment is impressive with satnav, ABS/BAS, Bluetooth, active Xenon lights, heated seats with neck warmers, leather, electric everything and auto everything-else. Options include a panoramic glass panel in the folding metal roof or MagicSky – a two-stage transparent or opaque roof for N$16,000.

Speaking of stages, the SLK55’s engine, gearbox and ESP have various setting for you to tinker with. The car barks briefly at start-up but settles into a quietly rumbling idle. The gearbox’ “Comfort” mode shifts quickly and the motor stays quiet, often using its cylinder de-activation to shut down half the engine and save fuel.

Unfortunately, I found the transition from four to eight cylinders rather jerky and the stuttering four-pot sound was just as unpleasant. Switch to “Sport” mode and the system (including its stop/start function) are forgotten as the exhausts get louder and the car holds onto gears a little longer.

You could also switch to the ESP’s “Sport” mode, which livens things up even further and while you’re at it, you may as well drop the roof (only under 10km/h) and put the gearbox in “Manual” mode for maximum enjoyment. Now YOU command the quick gear changes with hissing and popping from that incredible engine.

It’s loosely based on Merc’s outgoing 5.5 naturally-aspirated V8; now with high-pressure direct-injection, fairy dust linings and titanium gobbins that allow it to produce 421hp and rev to 7,000rpm with linear brutality, changing from deep howls to raspy hammering as the instrument panel goes red to suggest a gear change.

Switch the ESP off and the SLK55 becomes even twitchier than it already is – I found the best compromise to be Manual mode with Sport or full ESP, depending on the road. The quick, direct steering comes alive at higher speeds, the car sits nicely and as long as you treat it with respect, the AMG SLK will diligently carve up your favourite corners.

We clocked 0-100km/h in 5.2 seconds (claimed 4.7); our average consumption of 14L/100km is alarming for such a small car, amazing for such a huge engine and surely an all-time low record for an AMG. Thanks to its fuel saving systems, you can achieve 10, forget the claimed 8.5, but expect 20+ when caning it.

And cane it you will, I guarantee it. The SLK55 is slightly vulgar, rather expensive, hard sprung and potentially dangerous but it’s also quite clever, very luxurious, highly rewarding and exhilarating. This is a ridiculous car for rich people who like to show off and it masters that with perfection.

Its rivals may offer other hot little convertibles but nobody makes a tiny V8 roadster except AMG. You could buy the more sedate, more practical four-seater BMW 650, Benz E500 or Jag XK convertibles but to match the SLK AMG’s thrills, you’d have to triple the price and get an SL AMG, Aston Martin or Ferrari drop-top.

This exclusivity is also the car’s lonely disposition –it fills a niche and almost seems like a bargain at a shade under N$1m. Having recently tested the 225kW V6 SLK350, hand on heart, I’d go for that. The SLK55 AMG would just tempt me into cranking up the jazz and getting photos of the car in my post box.