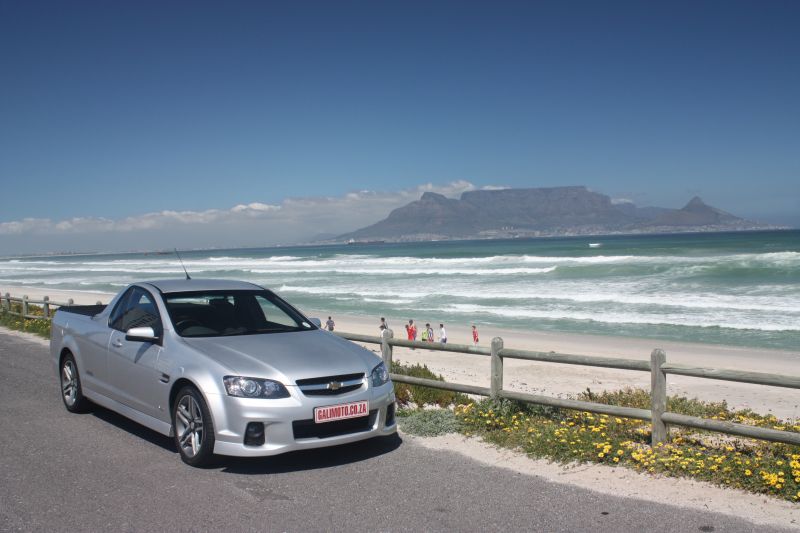 Of all the months in a year, October surely has the worst reputation. The seasons are in an awkward change, car sales slump, scholars and students are panicking, the Christmas holidays are too far away yet big supermarkets already annoy us with merry decorations.

Should you find yourself in a slump, panicky, annoyed or generally bored, may I suggest you get yourself the ultimate attention grabber on wheels, Chevrolet’s Lumina UTE SSV? Dollar for Dollar, not much can touch the V8 bakkie for sheer thrills, plus its thirst will completely destroy your Christmas shopping list.

That’s right, auntie Maureen won’t get a present this year because you’ve spent it all at the local pumps and tyre retailer. The vehicle will also wake you up, quite brutally, from the October blues and give the left side of your body a severe work-out with its heavy clutch and even heavier, clunky, six-speed manual gearbox.

Available as a sedan or UTE (bakkie) in manual or automatic, the Lumina has Australian heritage and American roots which means that it’s rather unsophisticated and big. It’s a big bakkie with big wheels, big load bed, big cabin, big steering wheel, big bucket seats and a big engine.

Its old 6-litre V8 Corvette engine develops 260kW (auto) or 270kW (manual) and while this lazy slacker with two valves per cylinder and rough idle produces a prehistoric 61hp per litre, it also cranks out a rubber-shredding 530Nm.

The incredibly crude six-speed manual gearbox has a rather tall first gear so pull-away response can be somewhat disappointing unless you dial in some revs and release the left pedal swiftly. Its traction control system will step in reasonably gently but switch that off and the SSV morphs into a heavy smoker.

Second and third gear are closely stacked so the Lumina has great acceleration once you’ve launched it properly. Our best attempt was 5.4 seconds to 100km/h and 400m in 13.5 but we believe there’s room for improvement as the SSV chirped its rear tyres into second, third and eventually fourth gear (at an indicated 160km/h).

This makes it abundantly clear what you’re dealing with here – a simple, powerful, manual V8 bakkie with a frightfully light rear end. It can commute safely, quietly and comfortably, has a great sound system and weird park-brake – but just wants you to press that button and give it some carrots.

Once you’re accustomed to its cumbersome feel, you can man-handle the Lumina SSV into any state of motorised debauchery. The downsides of this are frightening fuel consumption, occasional axle hop, drive-train shunt and the downright scary possibility of a stuck accelerator – throw the carpet out if you plan on flooring it!

Average fuel consumption will immediately shoot up from 15L/100km and keep going for as long as you like; the initially dead brakes are superb and the howling motor will attract loads of unwanted attention. You should also be mindful of high pavements and steep driveways as the Lumina SSV’s nose is rather low.

Sounds like stupid car, doesn’t it? Well, it is as stupid and impractical as it is unique and thrilling. Chevy have also spruced up the interior with a new central dashboard section; the three extra dials have made way for new air vents and a clever double-DIN touchscreen nav/HDD/DVD unit.

Some of the ergonomics are a bit questionable but the cabin’s space and comfort are excellent – especially for the price of N$447,500. It also comes with a 5-year/120,000km warranty and a 3-year/60,000km service plan – just remember to factor in the fuel consumption…

The Aussies and Chevrolet have built something the rest of the world could (and would) never dream of and in SSV pick-up manual trim, this car has no equal in our market. On top of that, it will devour enough fuel and tyres to prevent you and your wallet from ever entering a mall for Christmas shopping.