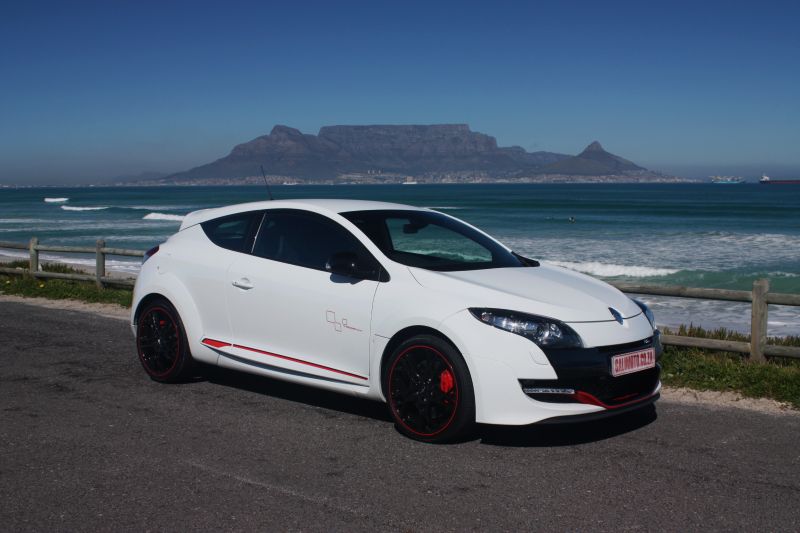 Dear owner of the white Renault Megane RS 265 Trophy. In case you didn’t know this, your car started life as a press demonstrator for local media. I’ve just had my turn and assure you that I didn’t torture it any more than absolutely necessary.

In fact, two days before its intended return date, your car decided that it wanted an oil change so I got on the blower and re-arranged our schedule in such a masterful way that I couldn’t help but mention it here. Your bruiser was returned prematurely and probably received its shot of lubricant post-haste.

The rest of this text should be old news to you as it will deal with the car’s specifications and driving impression. I sincerely hope that you’re reading this in your favourite armchair with the car safely tucked away in a garage, and not in a makeshift container office at a scrapyard.

My apologies, where was I? Oh yes, your car. Renault used its extensive racing experience to produce one of the best hot hatches which recently set the record for FWD cars on the infamous Nürburgring. On top of that, it’s very, very French so everything has a whiff of strange yet wonderful about it. Kinda like garlic.

Did I just type garlic? I’m sorry, I didn’t mean that. The Megane coupé is a good-looking, distinctive car with cutting-edge lines and modern proportions which takes to the RS treatment very well, as was evident from the aggressive beauty of the “normal” RS Cup I tested recently.

Its interior conforms to Renault’s idea of ergonomics which puts most controls where you wouldn’t expect them. I’m sure you’ve gotten used to them by now and also found the RenaultSport menu by holding down the top two buttons on that audio-come-telephone stalk thingy.

The slanted dials are hard to read in broad daylight and the multi-function screen with Bluetooth, CD/mp3 and radio takes quite a bit of fiddling to fully fathom. That dual climate control is great, the speakers aren’t and you’ve probably noticed that the Recaro bucket seats are rather figure-hugging.

I found the pedals and steering to be remarkably light for an über hatch, the crunchy gears are precise, and the outstanding grooved brakes send a small vibration through the pedal as you touch it. By the way, should it still be there, I didn’t put that gooey substance on some of the carbon-weave trim panels.

Have you also had people remark on the yellow seatbelts and slightly cramped rear seats? My 2iC immediately picked up this car’s uncompromising ride and slightly skittish nature, especially when combined with its monster power delivery and sharpish steering.

Sports mode (press and hold the traction control button) gives the car even more response to the point of it becoming difficult to drive. Crank everything to the max and the Megane RS Trophy becomes snappy as you cling onto the sporty steering wheel with its yellow stitched centre line.

Low-speed full throttle will produce tyre howl and/or flashing lights but thanks to a clever limited-slip diff, surprisingly little torque steer. With such a tight chassis, fat rubber and vicious power delivery, grip levels are fairly high and usable but the margin of error has decreased significantly.

The car has plenty of driver aids but it demands a fair chunk of restraint and common sense – there’s just so much power and grip which can easily tempt you into overcooking things. Understandably, the growling, popping and hissing of the 195kW / 360Nm 2-litre turbo-petrol four-cylinder engine beg you to push on.

I won’t mention my average fuel consumption but I can report that the rock-hard ride changes to acceptable at highway speeds, the folding rear seats (despite not falling flat) helped to carry extra cargo, and our GPS “only” achieved 0-100km/h in 6.3 seconds (claimed 6.0).

This puts it more in GTi territory than Scirocco/Golf R but it’s worth noting that the Trophy doesn’t have launch control and is notoriously difficult to get off the line. Keep the traction control on and it bogs down, switch it off and prepare to wrestle with spinning tyres.

When new, your car cost N$409,900 including a 5-year/150,000km mechanical warranty and 5-year/100,000km service plan. By now you’ve surely accepted, possibly love, its skittish ride and weird interior. I also hope that you’ve upgraded the speakers and remedied Renault’s most epic fail: the Noddy hooter.