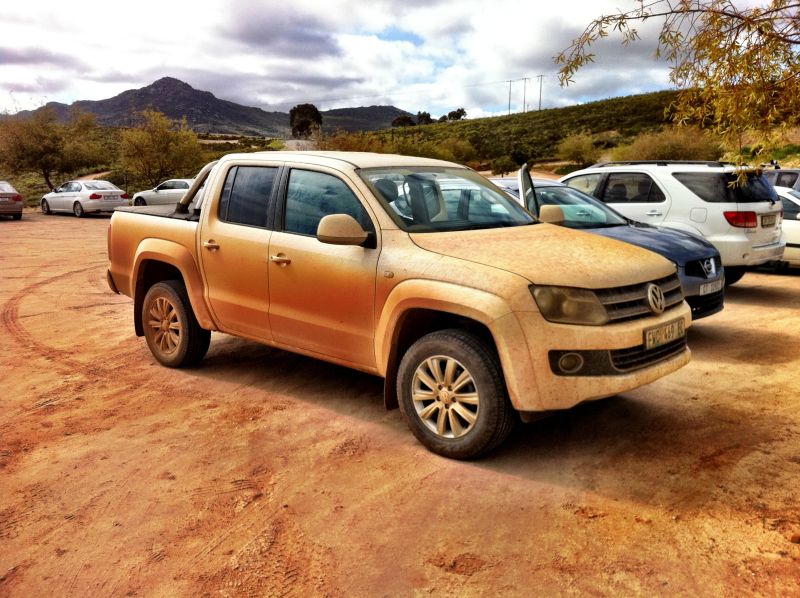 When last have you been to the dentist or spent some time with your mother-in-law? I’ll avoid answering both questions but can report that this past weekend, I did something I tend to avoid like the plague: drive a double-cab. Which one? A bi-turbo Volkswagen Amarok 4×2.

I usually take considerable detours around bakkies-and-a-half; the last time I drove such a vehicle was at the brand-new Amarok launch, exactly two years ago. And that only happened after numerous failed attempts to find somebody who could take my place.

By now you must be wondering what’s wrong with me so I shan’t keep you in suspense any longer. I detest double-cabs because they have two bodies and two differing suspensions on one chassis. This gives them the handling characteristics of a two-part costume cow; with a soft front and hard rear end.

Before I launch an attack on their cruise liner steering and holding cell interiors, I should mention that I understand why they feature so strongly in our local sales charts. Their versatility is exactly what the average family with own business and active outdoor lifestyle wants.

When a weekend with 4×4 preferences was on the cards and my own set of wheels failed in the cargo department, an Amarok bi-TDi 4×2 double-cab suddenly appeared in my life. Reluctantly, I took the giant home where it swallowed our luggage with absolute ease.

It didn’t take me long to warm to the brute yet I managed to resist the bakkie driver pose; dangling my entire arm out of the window. The competition may tease that only milk, juice and Amaroks come in two litres but the hasty 132kW / 400Nm turbo-Diesel in this application allowed easy overtaking and smooth cruising at 130km/h.

The scenery whizzing by in relative comfort, our Amarok only struggled on long inclines in top gear. Other than that, and especially for double-cab standards, it has a supremely quiet cabin, very comfortable seats and an interior look ‘n feel that’s very close to a car. I loved that.

The Argentinian-built German has garnered more flak than necessary and I can only report on two issues: second gear can get crunchy once the gearbox is up to temperature and we found a leaky door seal on the rear off-side door. VW is aware of this sporadic issue and, as a friend of mine just found out, a fix is now available.

Once the stop/go road works had annoyed us enough, we jumped off the highway and pointed the Amarok at some rather intimidating mountains. Its on-road behaviour is commendable but I was in for a lively reunion of double-cab, dirt road, leaf springs and rear-wheel-drive.

Wet or dry, the VW (like any other D/C) is very tail-happy on loose surfaces, especially if you’re used to a predictable front-wheel-drive or rock-steady four-wheel-drive. Our test car was a 4×2 so in sheer jealousy, pardon, desperation I pressed the Off-Road Mode button. This made things much worse.

Meant for slower speeds and steep descents, the computer interfered so much that we were fish-tailing our way through almost every corner until the bothersome system was switched off. What you need for higher speeds on a heavily corrugated road is common sense, a steady right foot and quick reflexes.

And may I suggest getting an Amarok for this task, if just for its marvellous interior? The seating positions are great, the pedals and steering are light and responsive, all other controls are intuitive and even when the road resembled a minefield, not a single rattle could be heard. Not one.

Deep inside the weekend getaway, our Amarok traversed insane amounts of sand, mud and water with confidence and at alarmingly different speeds. The foul weather often called on the services of its rear diff-lock until the white coat of paint had turned a beautiful two-tone brown.

All the while we travelled in absolute comfort with climate control, remote central locking, four airbags, CD/mp3 sounds and an average consumption of 11L/100km from the 80L fuel tank – quite a bit off the manufacturer’s claim (8) but hugely impressive considering the amount of off-roading we had done.

Our journey home was quick, quiet and dirty; everyone agreed that muck-brown was the best colour for a bakkie and as much as I hate to admit this, I umm, I’ll miss the Amarok. It has teeny-tiny niggles but heaps of advantages like its interior, looks, specs, wide load-bed with LED light and an eager, fuel-efficient engine.