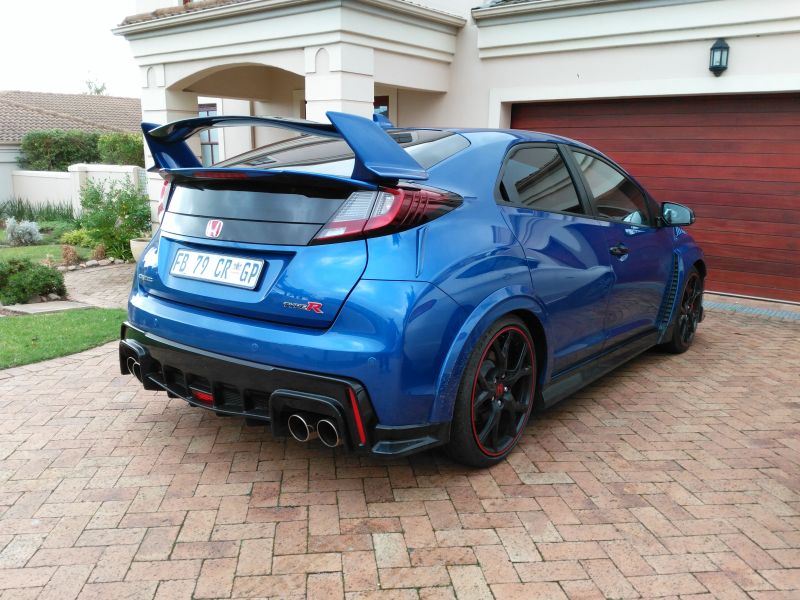 The motoring industry often develops its own names for certain genres of automobiles. Softroaders, MPV’s, Sports Sedans all denominate a category of car but none is more revered than the fabled Hot Hatch. After spending a week with Honda’s new Civic Type-R, I’d like to propose a rethink of that classification.

Über-hatch. Perhaps even Hyper-hatch. In my mind, a Hot Hatch is a versatile hatchback model with a fizzy engine under the bonnet. Fat takkies, dik exhaust and some sporty seats are enough to set it apart from its mundane siblings and the resulting performance should be entertaining. Fun.

The Civic Type R is none of these things. Well, perhaps Honda started off with these ideas but they yanked the dial to 11… and kept going. The already-daring Civic got an insane body kit, outlandish wings and fins, ridiculous slashes and gashes, unbelievably big wheels and super-low profile tyres.

Like I typed, they simply kept going. The exhaust system ends in four (yes, 4) enormous chrome pipes flanking a mean-looking diffuser thingy. Its interior got off a little lighter with a few Type R badges, sporty split dials with central rev counter and red leather (including a 12h00 mark) on the steering wheel.

You’ll find that the most extreme addition here is the pair of front bucket seats. As in the previous model, these chairs are extremely deep with such high and hard sides that tall people may have trouble operating the pedals at first. People with, umm, big rumps will also notice a high degree of discomfort.

Speaking of its predecessor, the preceding FN2 model was still a high-revving, naturally-aspirated screamer where this is Honda’s first turbo-charged Type R. The fact that I recall its model code off by heart indicates how much I love that strange-looking and rock-hard coupé. More so, I adored its howling 8,000rpm heart.

I admit to approaching the new Type R with this prejudice but a few things immediately became clear. For starters, having rear doors drastically increases the car’s everyday practicality. It’s even got a touch-screen infotainment system, red seat belts, a 475L boot and folding rear seats (1,191L); but no spare wheel.

The old one’s solid suspension has made to this new one almost intact; albeit now with active damping. A novelty is the “R+” button which, unbelievably, solidifies the ride even more. It also agitates the 2-litre turbo four-pot but more of that later. As before, Type Argh’ metal gear knob is highly conducive of the ambient temperatures.

As for driving this Mega-Hatch, initial movements weren’t as crazy as I thought. The exhaust is not too boomy, the clutch isn’t heavy, steering feedback and throttle response are sharp-ish and the manual gears are tightly stacked in lever position and actual ratios. Except for sixth, which is merely for cruising.

Driving around your neighbourhood will brutally highlight the slightest road imperfections and most sensible drivers will start planning their route around speed bumps, steep driveways, potholes, raised manhole covers and anything larger than a small pebble. You may also attract other performance cars like the pied piper.

Not that the Type R is overly loud, I still think the independent throttle bodies of its ancestor were louder and sounded orgasmic. Nonetheless, I grew fond of this engine’s whistling turbo sound, loud dump whoosh and fizzing engine note – which duets with a grainy vibration you can feel through the seats and ‘wheel.

For me, the biggest news here is the introduction of torque – good-bye Honda memes – a whopping great 400Nm of it. Although half the fun was revving the nuts and bolts off the old ‘R, this new model is so much easier to drive at a normal pace. Like, go up a hill, change lanes, reverse, overtake, park, commute and stuff.

First and second-gear wide open can be unruly but I was astounded how well the new Type R puts down its 228kW (or 310hp). Front-end grip is commendable, a definite improvement over the old one and I noted that the ESP and traction control are of the lenient kind.

You can switch them off and destroy tires but I found their interference so polite and the grip levels sufficient enough to leave them be. Thanks to that, our performance runs yielded a best 0-100 time of 5.59 seconds (Honda claims 5.7). Also, stringing a set of fast corners together is pure joy, supported by the broader spread of power.

Where the old Type R felt like a motorbike that had to be thrashed to the limit, this one doesn’t. And the more I drove it, the more I realised how brawny and usable this new model is. That’s especially true for buyers who live at altitude (Jo’burg, Windhoek, Nepal) and found themselves outgunned by turbo rivals.

Sorry for you, rivals, those days are now over. Trust Honda to address the shortcomings of its old car and burst onto the turbocharging scene with this monster. That description also goes for its price of N$616,000 but that’s to be expected in my new Super-Duper-Hatch category. Big bucks for big power and big fun.