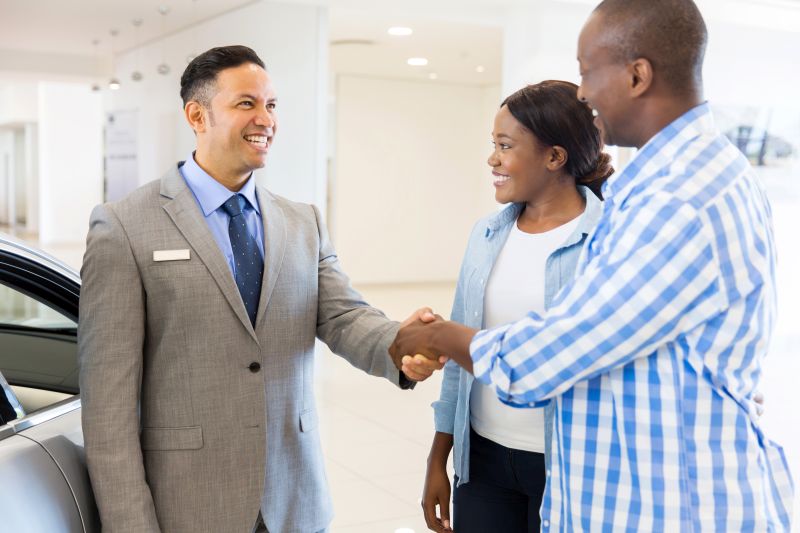 How to read car advert text…

Today we need to sort out a few things in the used car department, not just those on dodgy corners with faded red flags and torn bunting. Most of these transgressions are made by almost every private seller and second-hand car dealer, even the ones who have a one-touch cappuccino machine.

My rant takes the form of various descriptions you would see in a used car advert – and how you’re actually being lied to. Don’t believe me? Read on. 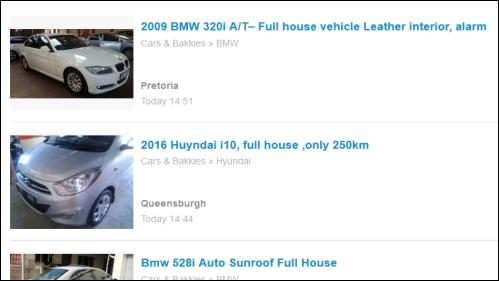 Before I start spitting while typing, we need to agree that the term “full house” means a car has every conceivable optional extra fitted that was available from the factory at the time. You know, Xenon lights, hard-drive navigation, climate seats, keyless entry, rocket launchers, that sort of thing.

You can’t expect everyone to be completely up to speed with what a manufacturer offered as standard or optional on a certain model but there’s a 99 in 100 chance that these two words in any advert are untrue, especially in our low-optional spec market.

When I see an ad with the words “Full House” scribbled across the poor car’s windscreen, I expect it to have EVERY SINGLE ITEM on the options list. If it has central locking and power steering (and those were standard), that’s not Full House. It’s lying. 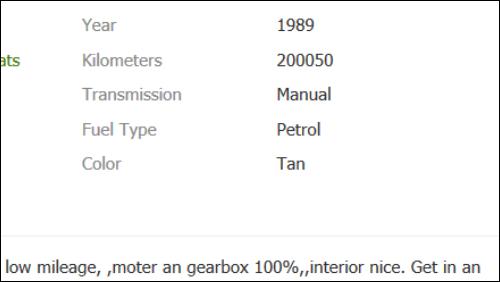 What part of two hundred thousand kilometres seems low to you? Oh, I know which part. You take the average annual mileage of most people (25,000km), times it by the car’s age and declare it to be low if the sum is higher.

In the case of an older car it will still be a six-figure number but might make you whisper “meh, not bad.” Good candidate for having its mileage turned back to a slightly believable reading.

Stolen, broken or about to unleash a catastrophic hailstorm of expenses. 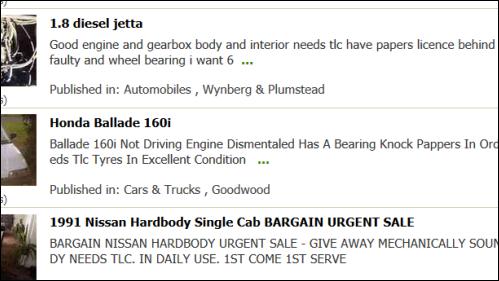 This is definitely stuffed, and certainly in areas which the cheapskate owner can’t afford. Should rather be worded “Needs YOUR money to function again; maybe.” Some adverts may even claim that the parts are all there but they never found the time to fit them. Yeah. Righhht.

Re-heally? A lady’s car? As opposed to… a gentleman’s car? Which one of the two sexes are you trying to piss off more, the girls for assuming they all drive like grannies or the guys for thinking they all tear around like complete lunatics? 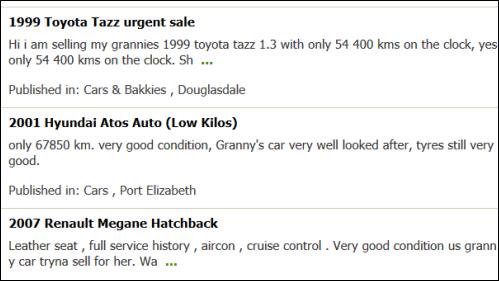 Here we go, I couldn’t wait any longer to deal with this one. You know the story. “Yes Sir, it was a granny’s car. She only drove it to Woermann & Brock on Tuesdays and to church on Sundays.” While that may be true and there could be a pristine gem waiting for you, I have a different theory…

Like, not new. Minor scratches and stone chips, small curb rash on a wheel or two, one electrical item not functioning. Possibly missing trim items too, but these owners are the worst to deal with. “It’s like new, man!” No it’s not. You’re an idiot.

This is a tricky one because nobody says which showroom they’re referring to. Aston Martin Dubai or Frikkie’s AutoRama in Otavi? 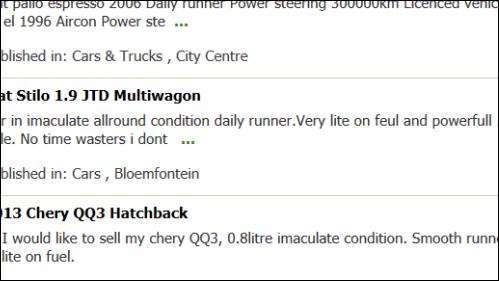 Basically a hunk ‘o junk. The wheels are still on, some doors still open. Engine may start and some of the electrics still function; sort of. Paint is starting to fade, hordes of stone chips, scratches and a few “easy to fix” dents. Hasn’t had a service at a main dealer since the day they bought it.

Somewhere between pristine and good. May have had a smash or two, the interior is starting to peel and its fragrance wafts between dead rat or a N$20 pine tree air freshener. 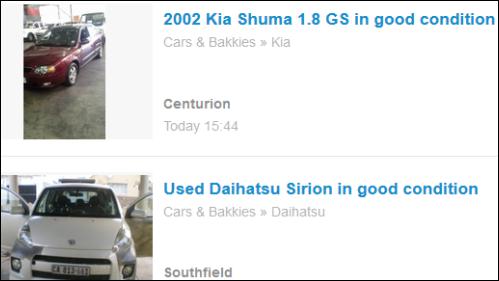 Near the end of its life. Rust has started to creep in, the service history is sketchy (or missing) and most moving parts only do so in the company of noise or smoke.

A scrap dealer would want money to take this skadonk. Engine and electrics will probably not work, every panel is damaged and there’s no trace of a service history. In fact, the car won’t be in the owner’s name or turn out to be de-registered, scrapped or 10 years behind on licenses.

This is a bit of a tricky one. The first one is usually true and denotes a model which you won’t find too many others of, unless the manufacturer produced millions and simply stuck limited edition badges on them. *cough* Hilux *cough* Do some homework before falling into this trap.

The second bit can be complete horse manure. Special edition has become so common in the UK that almost every car on the market has the letters SE behind its name. I’m not joking. People only want the special edition, which means the non-special-edition models have become extremely rare. Oh the irony.

However, the absolute worst crime is if an owner or seller stuck an AMG, ///M or other such sporty badge on the car and declares it in the specifications. And no, an aftermarket spoiler or set of mags – even of the wrong type – don’t count. A 320i with an M3 badge is still a P.O.S. with an M3 badge. 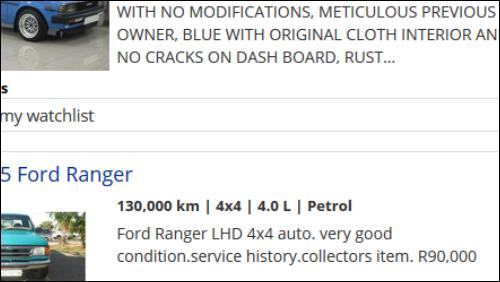 While it may have started off as a semi-collectable model, these cars tend to have at least one undesirable feature like an automatic gearbox, the wrong engine or – oh, you know – its steering wheel on the wrong side. What this moron is trying to say is that nobody wanted his dog turd and now he’s praying that some eccentric collector might bite.

This just seems desperate to me. When I see this description, every available alarm goes off. Why don’t you just include “non-drinker”, “non-drug addict” and “non-Bieber Fan” to the ad? If you have to point out that a car’s only redeeming feature is that nobody puffed in it, it must be a pile of dung.

Sure, lots of people smoke in their cars and I can see how buyers would have a problem with that. So instead of pointing out ALL the cars which weren’t smoked in, why don’t we simply mark the ones which do smell like an ashtray? “Smoker’s car – huge discount!”

Another reason to employ insane levels of mistrust. Why has Mister or Misses Manager deemed this car as the only one they would pick to take home for the weekend? Has it got more than reserve-level fuel in the tank? Are all the other cars in the ad just a bunch of skadonks?

When I see a bigger photo slap-bang in the middle of smaller ones with “Managers Pic” (yes, usually misspelt) scribbled below it in Comic Sans, I immediately feel sorry for every car on the page. Shame, all the others didn’t make the cut. Ag sies tog, that one probably owes them too much money and needs to go pronto.

If a car dealer needs to get feet through their showroom doors on a weekend, they almost exclusively fall back to the following.

BRING THIS ADD FO A DISKOUNT!

Never mind the trusty calls to action, my next concern is the spelling and vocab of car dealers and their media agencies. For the billionth time, “add” is short for addition and means to multiply or increase quantity. “Ad” would be short for advert/isement as it only has one “d” in it. Also, CAPS LOCK IS CONSIDERED SHOUTING and a little bit of spell-checking can help with the overall impression of your ad.

Which ones have you seen or what’s your biggest gripe with second-hand car adverts?