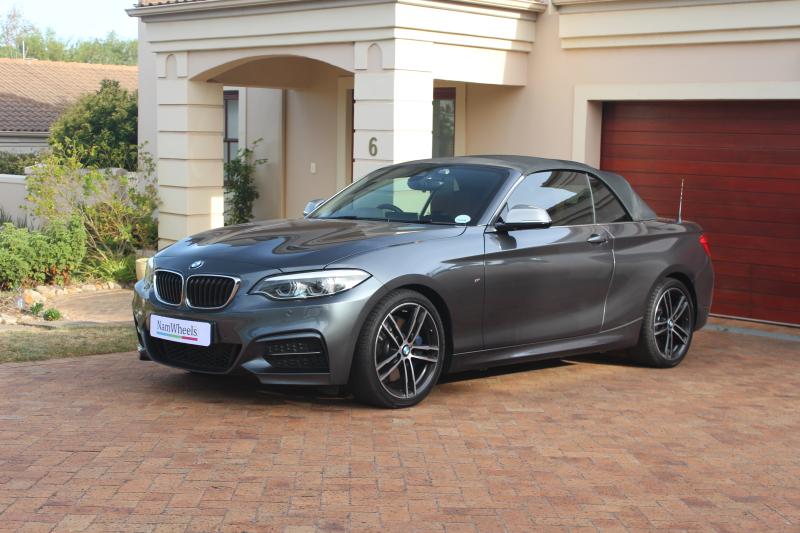 Five days. That’s how long it took me to finally get used to my latest test car or rather, to actually appreciate what its maker had in mind. Forgive my initial resistance to its charms, but the BMW M240i Convertible annoyed me for 120 hours straight with its many, many flaws during my regular commutes. 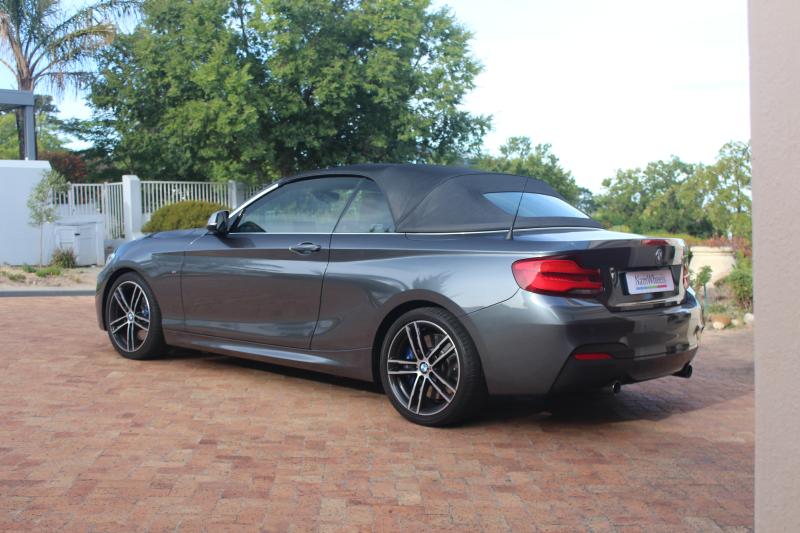 To start with, I slowly walked around this Mineral Grey test car and couldn’t figure out what (or who) the hell it was intended for. They took a compact hatchback coupé (2 Series), chopped off its roof, ruined what little boot space there was, gave it a fire-breathing engine and even more ruinous M Sport items of discomfort. 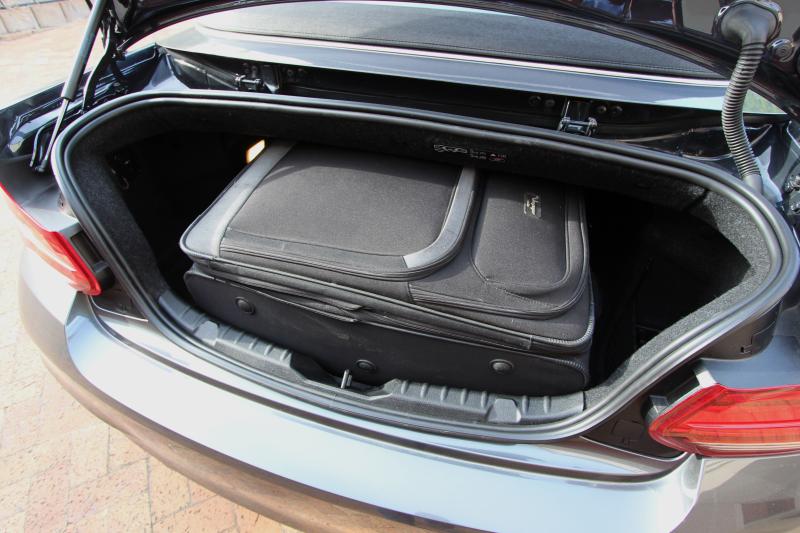 Included at no extra charge are a “how’s your mother” M-Sport body kit and wheels, rock-solid M-Sport suspension, M-Sport brakes, sports seats and a sporty eight-speed automatic gearbox. There is no mild (or non-M) 240i cabrio available, nor can you opt against the M-Sport steering wheel with its intrusively large center boss. 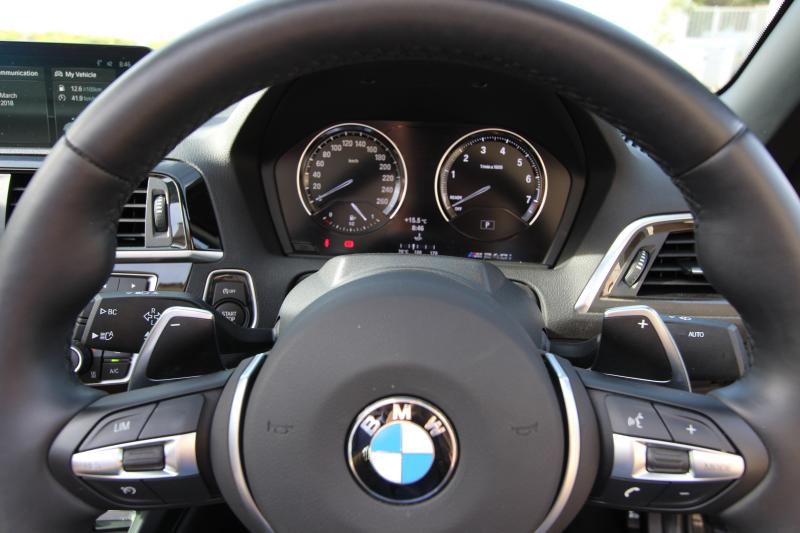 Something I urge you to spec – or car makers to learn – is “Comfort Access” or keyless entry because this car has a start button; or keyless start. This means that you will have to dig the key fob from wherever it is, press a button to unlock the car but then find a place for the key because you don’t need it anymore… and the same in reverse. It’s stupid. 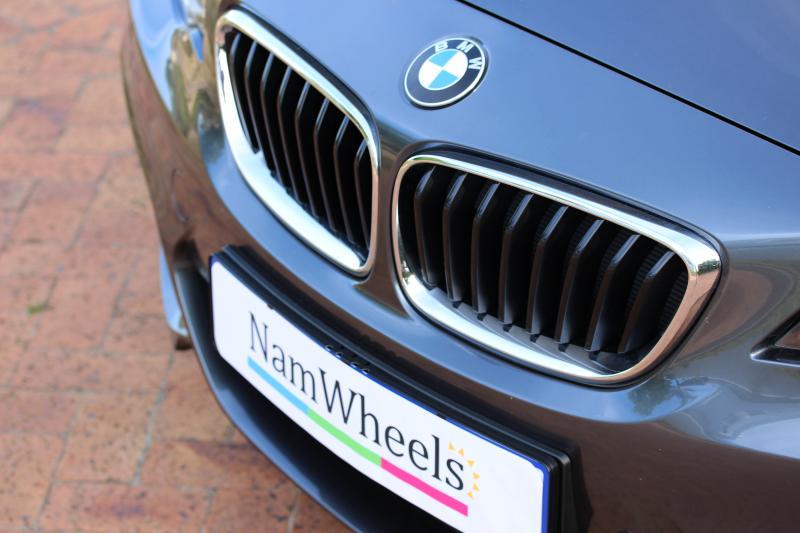 Much like fitting black leather to a topless car in Africa, although there are other hues to choose from at no extra cost. Other noteworthy items are no-cost metallic paint and a choice of three 18-inch wheel designs ranging from zero to around 3,000 bucks. Being a modern BMW, run-flat tyres and lock nuts are free of charge, too. 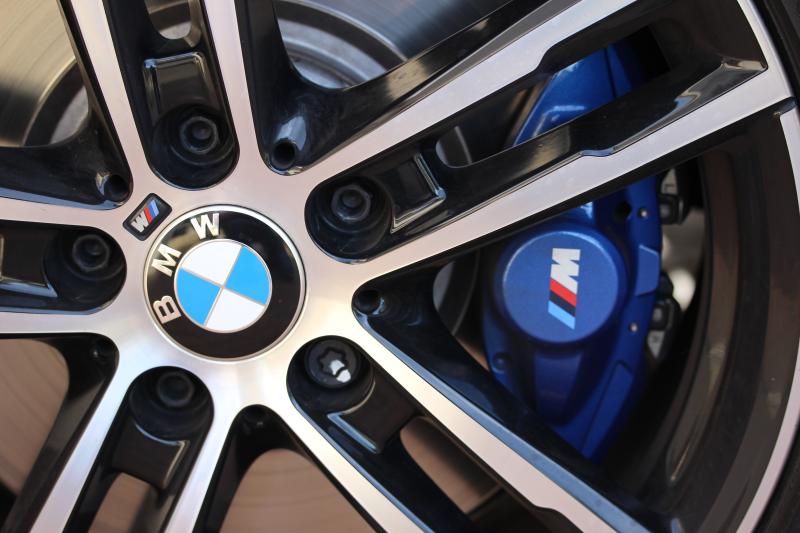 The next big fly in my review soup was the M240i’s structural rigidity; or lack thereof. Driving around town produced alarming jiggles and wobbles from the chassis, to the point of blurring the rear-view mirror. It turns out that solidifying the ride of a scalped hatchback is a bad idea. Unless you’re Audi. 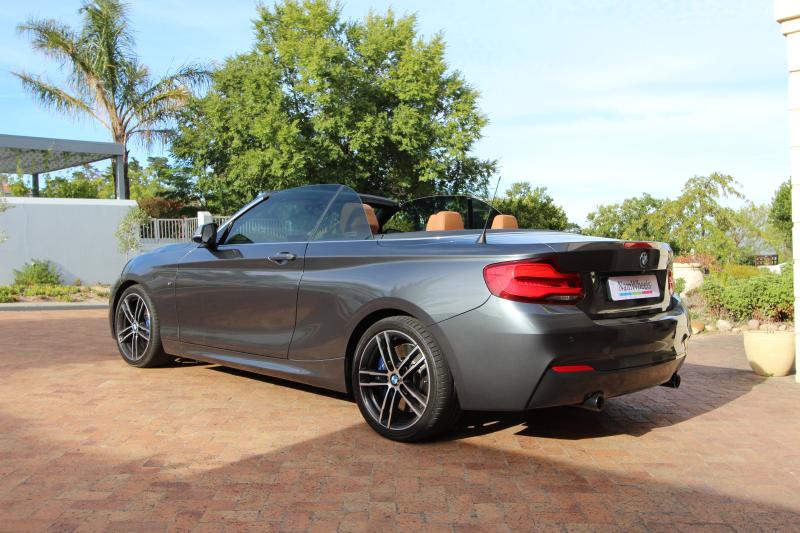 Anyway, these Bavarians also made a boo-boo of the gearbox, which is anything but sporty. It’s not bad in everyday traffic but given a boot-full of throttle, I often experienced a second or two of severe hesitation. I don’t think there was much turbo-lag from the simply stellar 3-liter turbo-petrol six cylinder engine though. 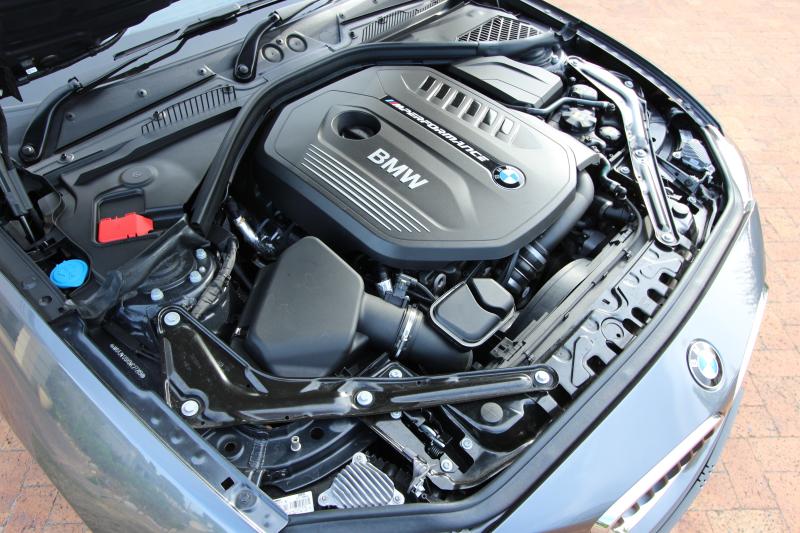 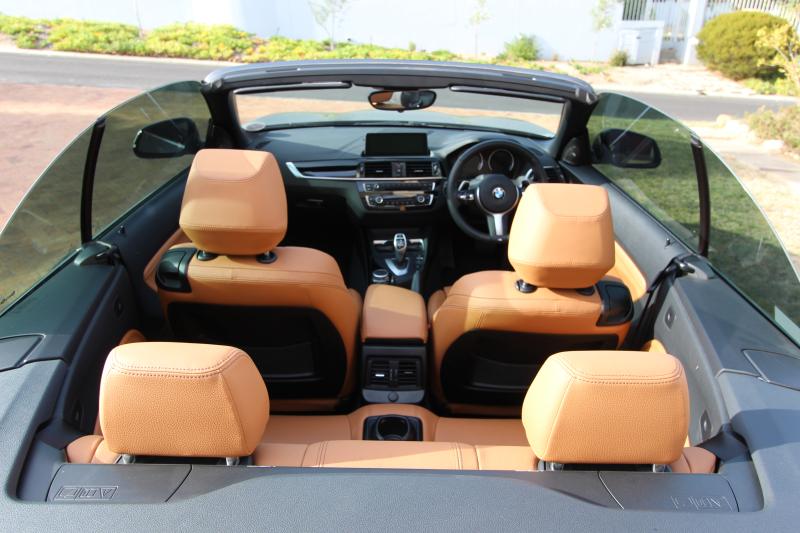 I was furious. What a stupid idea – a performance convertible! As the days went by, I took any opportunity to chalk up more negatives like the 130mm ground clearance, 53L fuel tank or 280L boot. While picking a fight with its roof protector (which enlarges cargo space to 335L), I found a collapsible wind deflector neatly packaged under a net on the boot floor. That’s when things changed. 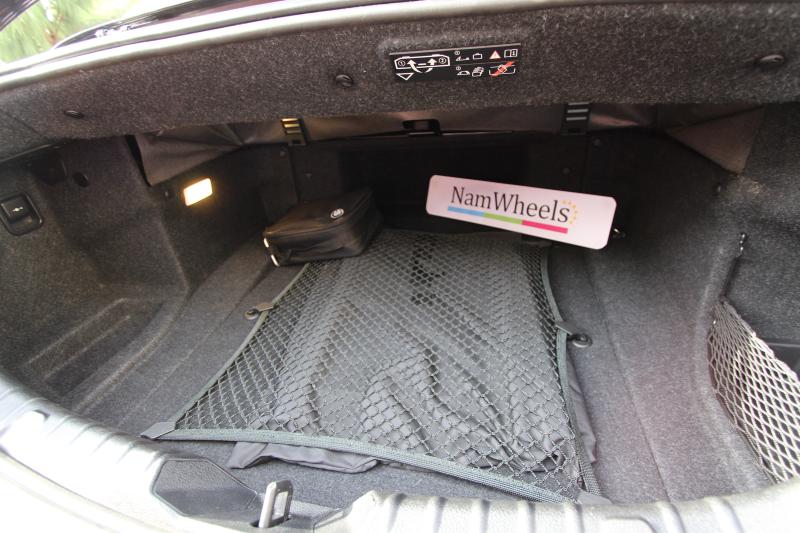 Once the gauze was in place, wind buffeting disappeared almost completely and I took my dearest out to test this on a perfect Sunday morning. She probably thought I was a grumpy so-and-so… hang on, she certainly does, but that’s beside the point. Out there, on smooth new tarmac with stunning scenery, the M240i drop-top became wonderful. 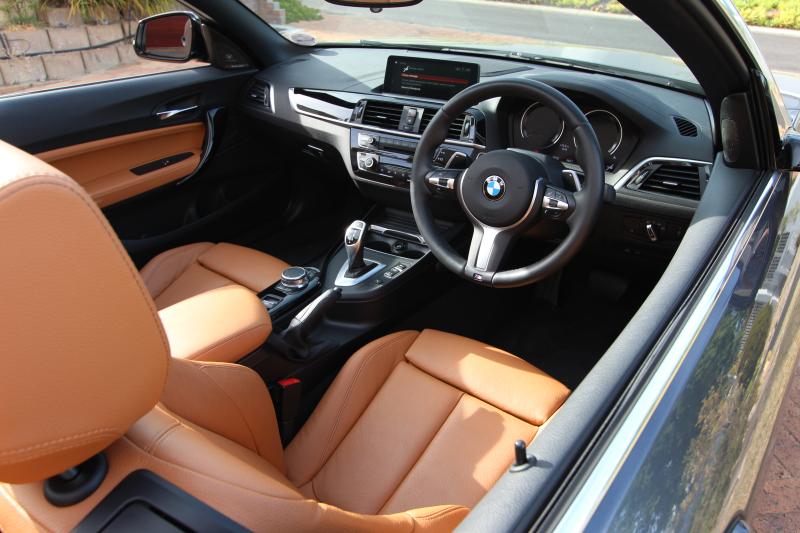 Near triple-digit speeds the gearbox sharpened up to the levels of the steering and handling (especially in Sport mode) and those twin matt chrome exhaust sang a beautiful straight six song. We even tried the lethargic Eco Pro mode, excellent sound system and maximum roof operation speed – which is around 50km/h. 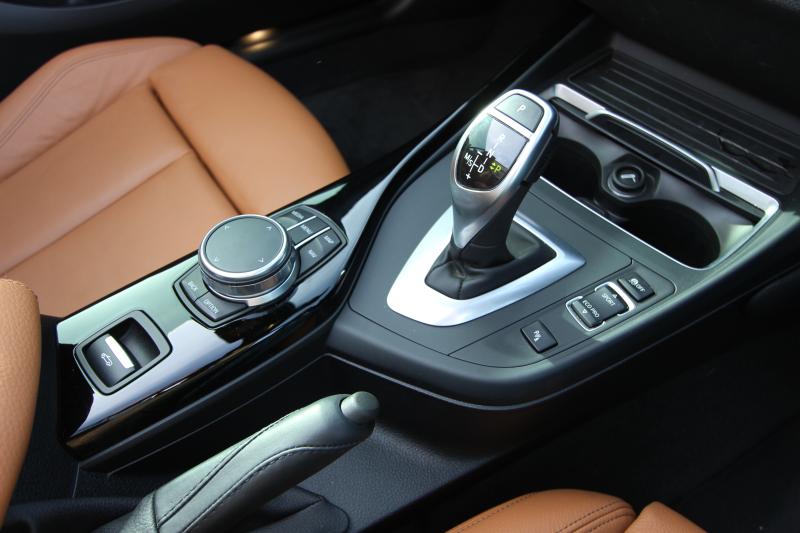 So that was almost exactly five days after I took delivery of the M240i Convertible; and finally it made sense. I honestly don’t like its behavior in the city and certainly wouldn’t use it for serial commuting but it really works as a snarling weekend toy for one or two people. Rear passengers would have to be small or left behind. 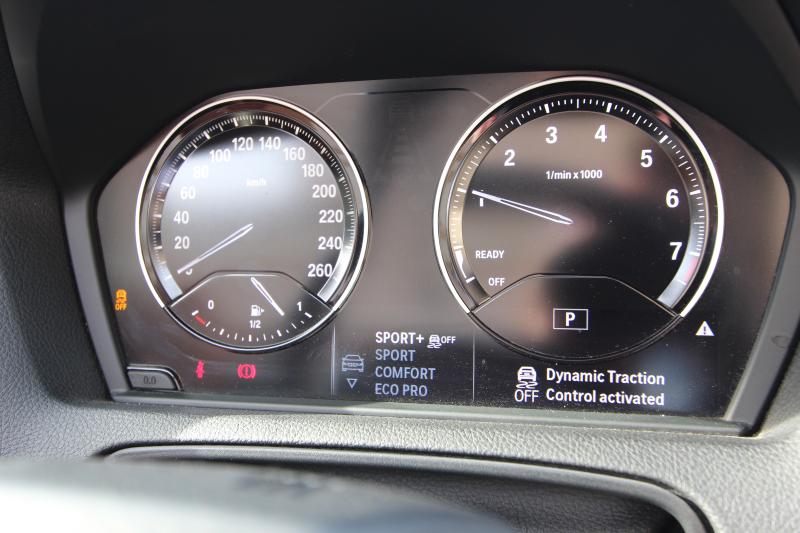 This car’s base price is just over 815,000 and the few space-age options are relatively affordable; our press car weighed in around 840k. If you’re after better value (and comfort), consider the cheaper 220i or 230i cabrios at roughly 630 to 670 thousand bucks. They should also make better everyday / commuting companions. 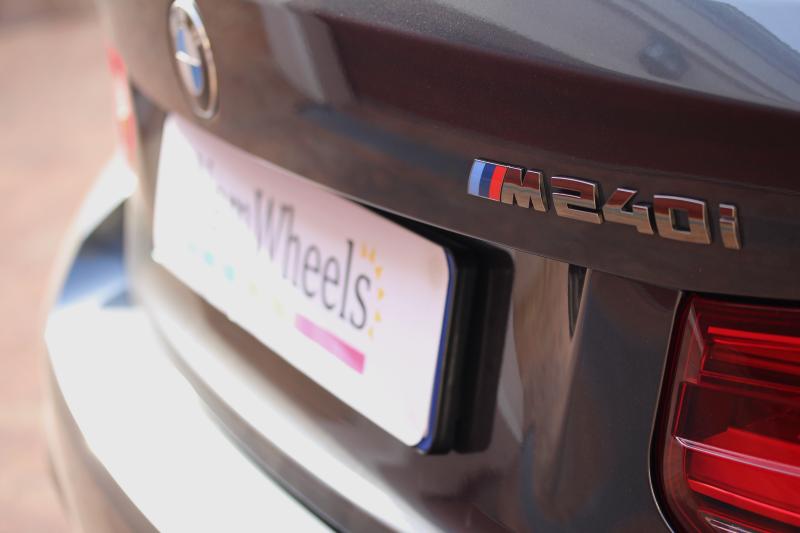