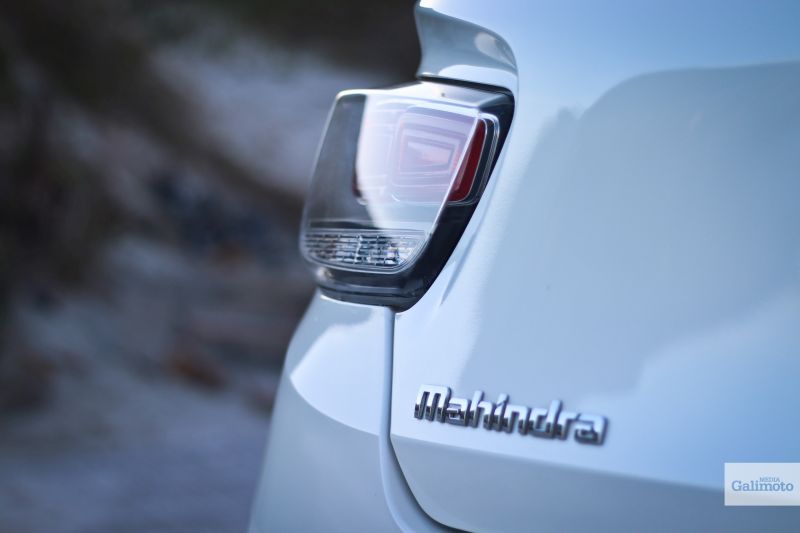 Compact SUV’s are proliferating faster than an alley of stray cats. The Indian Mahindra corporation is relatively new to this game with their KUV100 range – this time we test-drove the turbo-diesel model.

Oy, where do I start with this car? Shortly after receiving this white press car I realised that few people will aspire to own one. Hardly anyone has this as their screensaver. I could be wrong but – at least in brand snobbish southern Africa – this tiny Indian crossover SUV will be bought because of price and versatility.

You could make a valid argument for exclusivity and novelty, besides its presumably low sales numbers, the stubby body with bizarre design details and decent ground clearance should be a reasonably unique sight in your street. Add small wheels, a chopped bum and overly angry face to the mix and you’re looking at an eastern equivalent of the popular Ford EcoSport.

If that’s what Mahindra was aiming at, they’ve certainly done well. While the Ford can’t be accused of having a boring interior, the KUV100’s cabin lives on a completely different planet. The dashboard shape is very funky, there are fine chrome and texture contrasts everywhere, plus the top dash material looks like a cool fibre weave.

There’s a decent amount of head- and leg-room in all seats, although the driving position is not ideal because the steering wheel does not adjust for reach; and a large centre dashboard section encroaches on valuable knee space. This houses the KUV100’s gear lever in a pleasingly high position but all testers had trouble finding reverse.

The rear bench is best used by two (rather than three) people while the tiny boot only takes 243L. Fold those rear seats over for an extra 230L. The miniscule parcel tray in this vehicle wouldn’t stay up because its strings were too long. Also, the boot lid can only be opened with the key and there are only two (front) airbags.

The instruments are very simple and easy to read with only a twin-trip meter and confusing gear indicator. There’s a Power and Eco drive mode with fairly noticeable effects, as well as a dreadful start/stop system to eek (a claimed) 4.3L/100km from the 35L fuel tank. The radio (with reverse park diagram) is easy to use.

Winner of the overachiever prize in this car is the ventilation system because the superb air-conditioning is distributed around the cabin by the world’s most ferocious blower/fan motor. Of its four speed settings, 1 and 2 were quite strong already and I never dared go beyond those for fear of the windows being blown out.

As for driving the KUV100, I immediately noted its friendly Indian roots by its easy controls, bouncy ride and fairly accurate speedo. Rear passengers noted hardness at speed and the vehicle leans severely during hard cornering. I found sufficient grip (and eventual under-steer) from the 185/60R15 tyres but take note that there’s no ESP fitted here.

The 1.2L turbo-diesel three-cylinder engine deserves some respect as well because the lively little number throws up to 57kW (about 78hp) via a five-speed manual gearbox to the front wheels. More importantly, it develops up to 190Nm of twisting power for pleasing mid-range punch; read: it performs well around town.

Peak torque drops much earlier but we found the abrupt end of its determination at about 3,500rpm. High-speed driving and performance testing reveals a different picture though; our best 0-100km/h time was 13.44 seconds. Its breathlessness above 100 is highlighted by the fact that 100-140km/h takes exactly 20 seconds.

At this sort of speed I also noted an all-consuming speed wobble and that raised ride height’s biggest drawback – a keen disposition to side winds. Our single emergency stop from 100 resulted in tremendous nose diving, a bit of wheel lock-up (probably at the back), a flicker of the oil warning light and sub-par stopping marks of 3.17 seconds and 45.23 metres.

In all fairness, the Ford EcoSport didn’t fare much better with 3.24 seconds and 43.81 metres.

Which makes me want to summarise the Mahindra KUV100 nxt as follows. It’s not as established as its rivals but is easy to drive and looks interesting. It’s got a few shortcomings (including awful high beams) but none of these are a deal-breaker if you only use it to trundle around town or a bit of countryside; at moderate speeds.

It’s not as established as its rivals but is easy to drive and looks interesting.

The joy of owning one will set you back R224,999 and activate a 3-year/100,000km vehicle warranty, 5-year/150,000km drivetrain warranty as well as a 3-year/50,000km service plan. I’m unsure (but jolly interested) if this compact Mahindra crossover will last beyond those warranties.