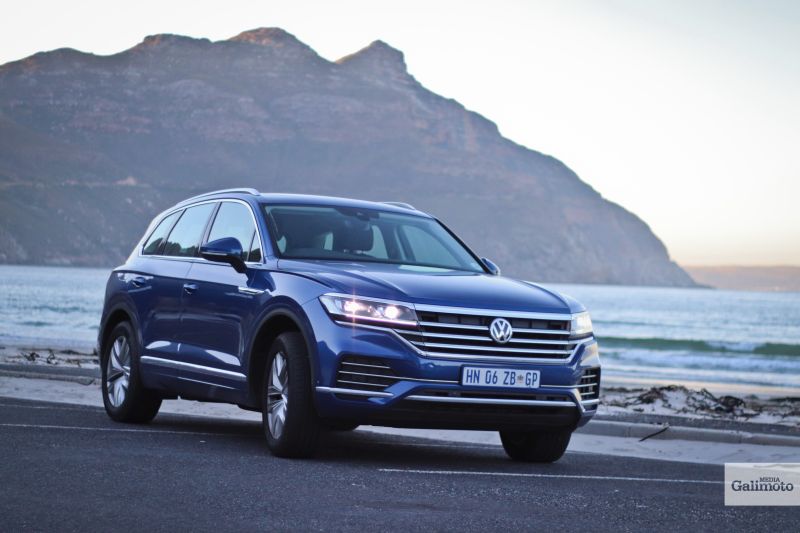 The good, the bad and the Touareg

I like to think that I’m not unjust or mean about the cars I review which is why I can count all my nasty, negative reviews on one hand. Volvo’s hapless C70 Cabrio, the first-gen BMW X1 and a cheap hatchback or two are about to get some rather illustrious company in the shape of the new Volkswagen Tiguan…

In order to properly explain my complaints, I’ll start with the chocolate side of Tiguan Mark Three. My goodness, it’s good looking! VW is on a complete roll with their design language and even this 2,040kg behemoth of an SUV looks sleek, dynamic and pin-sharp.

The same can be said for its voluminous interior and the astonishing way it drives. It’s easy to steer, doesn’t feel cumbersome, while offering decent visibility and handling for its size. Our test car’s sensible 235/65R18 tyres and handsome wheels gave it an air-supported ride of much comfort with excellent grip.

So far, so good

Thanks to four-wheel steering it turns on a dime, while performance and fuel economy are both superb. This 2-ton beast easily sips less than 10L/100km from its 90L tank and our best 0-100km/h time was a GTi-scaring 6.33 seconds.  The brakes, cabin materials, 750L boot space (here with Cargo Pack), sound system and LED headlights are also amazing!

The Touareg comes in three trim levels of which this was the cheapest… at just over 1 million bucks. Gulp. It’s only available with one engine/gearbox choice, the excellent 3-litre turbo-diesel V6 which sends up to 190kW or 600Nm through a super-smooth eight-speed automatic gearbox to an intelligent all-wheel drive system.

That avalanche of torque only comes on song from 2,250rpm onwards while the gearbox is a bit of a slacker. The result can only be described as monumental turbo holes in most everyday situations. Flooring this beast from standstill or giving it the beans at anything less than quarter throttle results in a two or three-second thinking pause. And yes, I timed it. Repeatedly.

Besides being frustrating, it’s also rather dangerous. Forget about taking gaps, changing lanes or merging into traffic… at least not gracefully. Eventually your foot hits the carpet but still nothing happens. Nothing. Then, most probably when the gap has passed, the Touareg catapults forward like nobody’s business. See what I mean?

Shortly after almost t-boning a small hatchback in an intersection, the brand-new Touareg presented me with another riddle. How the hell do you change the radio station? Never mind the absent volume knob, this one-million-rand mammoth has no dedicated infotainment controller or buttons. Yup, you read correctly.

Sure, there are some on the multi-function steering wheel with options on the comprehensive trip computer (inside its handsome instruments) but the huge media screen can only be controlled by your fingertips. At 120km/h. On the upside, I have to note that it’s beautifully made and angled towards the driver in an equally attractive dashboard with contrast stitching.

No, you hang up

On the downside, it also lacks physical phone buttons so I always begged my conversation partners to put down because I didn’t know how to; especially at 120km/h. The navigation took me to Agrimark instead of Home Affairs in Paarl while the main nav screen has no map zooming options; at least not obvious ones.

Eventually I discovered that I could zoom with two pinched fingers (…at 120km/h) and that it showed my altitude, 3D options and the prevailing speed limit. In other words, completely useless information. What I needed at that time were directional arrows, upcoming turns, ETA and other journey details. Not in a Touareg though.

Nope. The media screen is so enormous (i.e. it takes up so much space in the central dashboard area) that VW had to split the passenger air vents into two; a rigid one atop the dash’ and two adjustable ones which are recessed so far under said screen that they can only cool the dashboard’s lower lip, the gear lever or your knees.

Oh, did someone say gear lever? This stubby unit not only has a shift button – a brainless function to counter American lawsuits – but a Park select button right next to it. Can you see where this is going? Time and again I’d press the wrong one so the car would (a) not engage Park or (b) slam into Park while I was manoeuvring.

I can appreciate that Volkswagen was extra-careful while designing the new Touareg but its parking sensors are a little on the over-eager side. Perhaps you shouldn’t buy one if you can’t see over the steering wheel? Anyway, engage reverse and the entire infotainment screen disappears because it switches to a camera view… in all fairness, a few other cars do that too.

I wonder if other cars also display a media volume bar which briefly blanks out the outside temperature, time, direction of travel and lane assist icons at the top of their trip computer? And as a final nail in its coffin, our test car kept annoying me with “Eco Tips” while occasionally vibrating the accelerator under foot.

Eventually I would just floor it to stop the irritating nanny device but of course, it took three seconds before anything happened. Figurative shoulder droop. Prices start at R1,024,800 and each new Touareg is sold with a 3-year/120,000km warranty and a 5-year/100,000km service plan but to me, that’s rather irrelevant.

If I were to replace all the badges of this SUV with less renowned ones, most people would agree that it’s a terrible car. You’d have to be a complete Volkswagen disciple to buy one. Also, it would help if you’re extremely tall (i.e. long arms), have temperature-impervious knees and can operate complex gadgets while on the move.