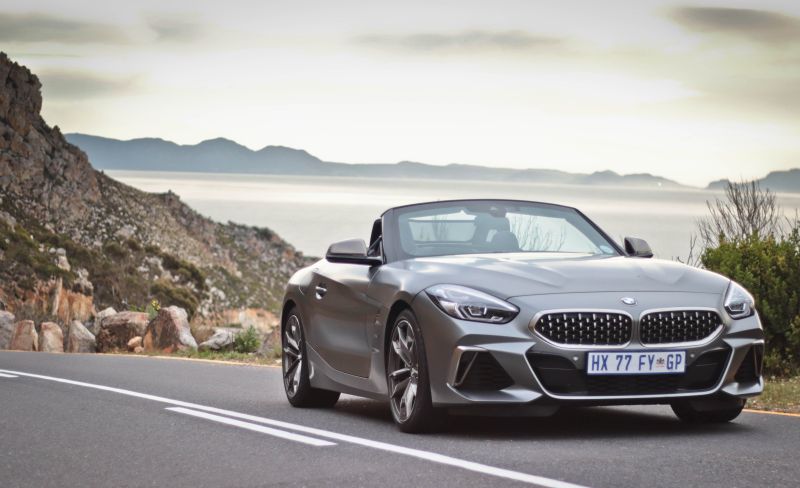 Sometimes it’s nice to be part of a minority. Exclusive. Quirky. Whatever you care to label it, there are upsides to staying clear of the herd.

The BMW Z3 and Z4 roadsters always seem like an automotive minority to me. They were certainly more popular overseas but with our harsh African sun and conservative market, these racy Bavarian two-seaters never really caught on. What didn’t help is that some of them looked a bit, umm, challenging.

James Bond’s product-placed Z3 didn’t do it huge favours either, especially in the books of proper petrol-heads, who spotted the forced agenda a quarter mile away. What followed after that was the Bauhaus, almost modular-looking Z4 from the company’s notorious Bangle design era. Some people like that code E85 ragtop, I don’t.

What makes me feel like a minority is the next generation of Z4 (code E89) which came along in the late 2000’s. You know that swooping, long-nosed, feline-looking, transformer tin-top which had a delicate design. I still think it looks graceful and elegant but recently realised that this feeling is definitely in the minority.

When did I notice it? While test-driving this new gen-3 BMW Z4, and not just any old one, oh no, this was the big daddy M40i. Where once there were delicate lights and flowing curves, this new G29 model replaces that with more determined and – dare I say it – aggressive styling. Add some ///M bits and it looks a tad “in your face.”

Which is exactly what people want nowadays; so well done to you, BMW.

They also want power, gadgets and efficiency, which this vehicle has in spades. Power comes from the legendary 3.0 straight six turbo-petrol engine which, in this form, kicks out up to 250kW or 500Nm. Everything is sent to the poor 275mm-wide rear wheels via a sharp but slick eight-speed automatic gearbox.

The result is power at every turn. Too much power, if you want to get naughty and make some smoke. There’s also torque in abundance and with eight well-spaced ratios at your fingertips, a Z4 M40i never wants for forward momentum. Top speed is limited to 250km/h while 0-100km/h should take 4.5 seconds.

In a brutal display of its efficiency, this metallic grey specimen spat out a best time of exactly 4.66 seconds during our performance runs. Despite some first and second gear wheel spin, I felt that the car could’ve been even faster but BMW (probably wisely) did not gift its overwhelmed gearbox a launch control module.

More precision awaits the new M40i pilot in the feedback of its steering mechanism and adaptive suspension setup. A word of caution is necessary to those who suffer from chronic pain or lingering injuries as the ride in this car borders on solid; even in its Comfort setting. Switch to Sport/+ and it becomes downright rude.

That also goes for the throttle response, gear change ferocity and exhaust noises; all of which become rather uncivilised when the car is poked with a stick. Another cautionary advice goes to young drivers and any journeys involving wet or slippery surfaces. This is not a toy! The Z4 M40i will punish inexperience or lack of concentration.

This is not a toy!

On the flipside, as much as you can stomach its firm ride, this angry Z4 can bumble along in morning traffic or commute all evening with the other lemmings on your favourite highway. The seats are rather snug, a bit hard but otherwise supportive while the infotainment system caters to your every media and connection whim.

The boot is understandably small (281L) but a marked improvement over the old Z4; because this one’s reverted to a folding fabric roof. The claimed average fuel use of 7.4L/100km is a dream scenario. You’ll probably anger the beast a couple of times per day while abusing its frightening mid-range turbo typhoon.

The result? I took about 14L/100km from the 52L tank but enjoyed every minute of it. On the last night of driving this – with the top down and the system up – I even attracted a new acquaintance with a jolly noisy Audi RS3. We made our cars exchange rude sounds for a while and then went our separate ways.

Which puts me in mind of the BMW M240i Cabriolet I tested a while ago. These cars lean towards the colloquial one-trick-pony, they are performance-enhanced playthings which tolerate your daily grind but would rather howl around a mountain pass or fizz and splutter their way through the local race track’s chicanes.

The joy of owning a BMW Z4 M40i will set you back just over a million bucks and comes with a 2-year warranty and 5-year/100,000km service plan.