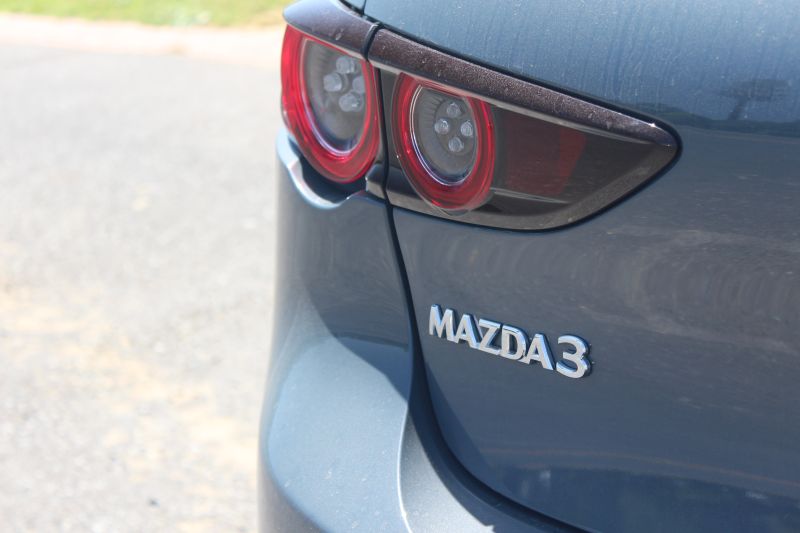 Stuff you wouldn’t find in the sales brochure. That’s what I like to base most of my reviews on because – let’s face it – you probably know all about this car’s airbag count and active driver aids.

You do? Oh good. That leaves me free to ignore the boring stats while focusing on what really matters – this new Mazda 3’s split personality. The southern African division of this Japanese carmaker already invited me to the launch of their new hatchback but spending a week behind the wheel revealed a few more truths.

Yes, its unique shape is quite mean-looking in places and bizarrely bulged in others. No, those black alloys don’t make it look cool, they just ruin an otherwise clean profile. Had they been silver, they would’ve helped immensely with the car’s stance. This way it looks ungrounded, unkept or, at best, as if its wheels were stolen.

The rear ¾ pillar is not only extremely round, it’s also incredibly wide. Nowadays a coupé-like window line is obligatory so Mazda followed suit and gave this latest 3 a steeply-rising silhouette which ends in a tiny rear window; and atrocious rearward visibility. Thank heavens there’s a reversing camera in this model…

Some passengers rightfully complained about a stingy window allocation, especially at the back, so avoid loading any claustrophobics in there. Someone also commented from behind me that this car has a rather choppy ride which – yet again – is the fault of those daft wheels with jolly low-profile 215/45R18 rubber.

On the upside, Mazda’s recent determination to go premium is already evident in the soft leather dashboard topping, red pin-cushion leather seats and classy displays. The instrumentation is half-digital with “normal” rpm, fuel and coolant gauges. The latter appears to display an actual value, unlike most modern dials.

The cabin is also blessed with loads of flowing shapes and surfaces which form interesting recesses with varying textures. Mazda has always experimented with daring shapes so I wouldn’t call it novel and other vehicles offer similar cockpit styling elements. All furniture is supportive and relatively soft but, alas, only available in depressingly scorching black.

Despite its slit eyes, this car’s LED headlights are very impressive. Their spread and intensity is most satisfactory and they even swivel in your desired direction of travel. But you probably read that in the brochure already. Not so great is the Mazda auto-locking system which shuts all doors as soon as you exit the vehicle.

It’s incredibly frustrating because this stupid car will lock itself by the time you’ve walked from the driver’s door to the boot. Or a passenger door. Or two millimeters away. I would rant even further but there is a setting to kill this irritating annoyance in the fairly intuitive infotainment system.

Back on the chocolate side is the 12-speaker BOSE sound system, which is simply outstanding! For the price point, its (adjustable) spread, audible clarity and punch are superb. No doubt, there must be some clever signal processors and amplifiers at work, plus I found a removable subwoofer nestling inside the emergency spare wheel.

Can you see why I accused this new Mazda of having a split personality?

Here comes the big one, though. Its drive-train. It consists of a naturally-aspirated, (sort-of) old-school 2-litre petrol in-line four cylinder engine mated to a boring six-speed automatic gearbox. Which part of that is premium and daring? A funky hatchback with contrast stitching should have tri-turbo hybrid vertical take-off.

I’m fairly convinced that Mazda was so eager to get their new premium hatchback contender to market that they kinda forgot about the engine and transmission. Or the quad-clutch hyper-drive unit wasn’t ready yet. In any case, it has culminated in an achingly modern vehicle with rather outdated propulsion.

Before anyone calls me a hypocrite – because I like simple engineering – this 165hp engine will appeal to those who don’t like smartphones and want things to last beyond their warranty periods. The gearbox too, although it can get flustered uphill, while overtaking and/or at altitude because it’s desperately hunting for the 213Nm of torque. And then, revs.

D’you see what I mean? Had they kept the vehicle simple (and affordable) this drive train would’ve been perfect. Simple, economical, smooth. But this new “premium” Mazda3 felt like an odd compromise which, I’m sorry to type, is completely out-gunned by its illustrious competitors.

Did we really need another premium brand?

I don’t think so. In the hatchback market alone we’ve already got Audi, BMW, Citroen (maybe, maybe not), Fiat, Ford, Honda, Hyundai, Kia, Mercedes, Mini, Opel, Peugeot, Renault, VW and Volvo; to name but a few. At least it still represents value for money with all those gadgets, a R474,000 price tag plus 3-year unlimited warranty and service plan.