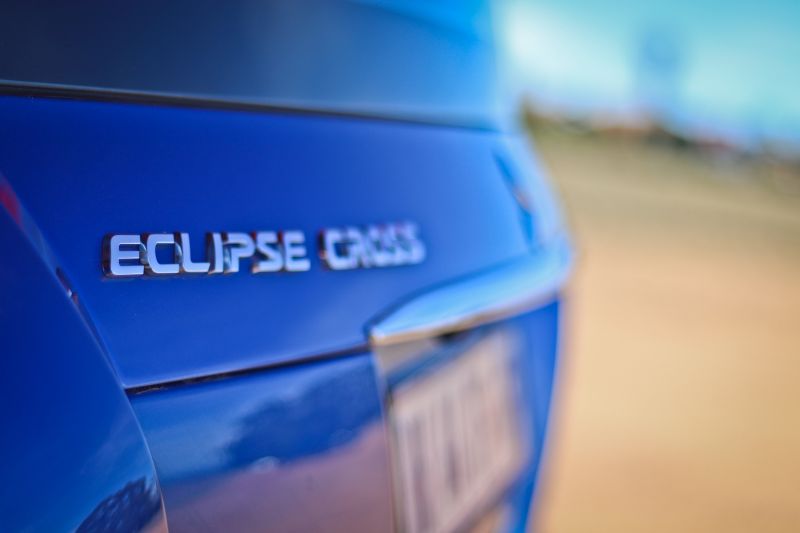 What was once a laughable trickle became a sizable stream, then a raging river before morphing into a fully-blown tsunami with no discernible end: the onslaught of compact SUV’s. Most vehicle manufacturers now have more Mommy 4×4’s than any other vehicle on their disjointed websites… and Mitsubishi is no exception.

Granted, I will admit that Mitsu was part of the early trickle/stream fraternity because they started with the Pajero / Montero a few decades ago, Pajero Sport in 1996 (locally about 2008) and have been making compact SUV’s since the Outlander in 2001. The sub-compact ASX arrived around 2010.

Although this new Eclipse Cross appears to be an all-new product, from what I can tell it shares some similarities with the smaller ASX and slightly larger Outlander Sport; which isn’t available here but will surely make landfall soon. Local buyers may choose between two models – this 2.0L CVT 4×2 for about N$400,000 or a 2.0L CVT AWD for 50k more.

Both models use a two-litre 16-valve four-cylinder petrol engine which is good for 110kW (150hp) or 198Nm. Unfortunately this is sent to the wheels via a continually variable transmission (CVT) with “six-step Sports Mode”. Usually I quite enjoy CVT’s but this one lets the side down… it’s sloppy and lazy.

But more of that later.

Personally I think that Mitsubishi has got a good thing going with the front end of their cars, as also evidenced by the new Triton bakkie. This Eclipse Cross has quite a handsome face, especially when coated in deep metallic blue with its tasteful shiny trim, daytime running lights and alloy wheels.

(Don’t worry, South Africans, you can also order this car in accountant white.)

While the cabin is a relatively interesting place to spend time in – drenched in obligatory and depressing black – it’s at the back of the crossover SUV where things get a bit weird. Its window line and side crease meet in a split rear windscreen the likes of which we haven’t seen since the Honda Civic hatchback or Citroën C4 and Mercedes C-Class Sports coupés.

The upside is a unique look, complete with bulging rear buttresses, but its layout necessitates the inclusion of that rear-view camera for any parking manoeuvres in close quarters. Also, most drivers won’t be able to see the horizon in their rear-view mirror… which can be problematic but also shields your eyes from the many wonky headlights on our roads.

Is this the point where I declare that most SUV drivers only use their mirrors for grooming purposes?

Pardon the cynicism but I’m afraid that’s what seven days with the Eclipse Cross did to me. This was compounded by the lacklustre performance of its drive-train which hides a fairly spritely motor, I’m sure of it, yet smothers any smidgen of dynamism or excitement in ye olde disjointed, noisy, rubber-band CVT malarkey.

This is such a pity… we’ve recently driven a few CVT-equipped vehicles which felt way more agile than this Mitsubishi. For the sake of its sales, I have conveniently forgotten their names. Where other car makers learnt to tighten up their one-gear-fits-all ‘boxes, it appears that Mitsu grabbed a unit from the bin marked “1997 Scooter transmissions”.

Top speed is alleged at 188km/h and 0-100km/h should take around 12 seconds. I’m happy to report that our best attempt was an impressive 10.92 and reversing the process took a satisfactory 2.96 seconds and 40.93 metres. The comfort/handling ratio is also acceptable with 225/55R18 rubber on all corners and early ESP intervention when needed.

Ground clearance of 180mm and good approach/departure angles helped us sail through rough farm roads with ease while the 378L boot swallows most belongings of a small family. Drop the 60/40 split rear seats for an extra 780L.

Mitsubishi claims average fuel consumption of about 8L/100km from the sizable 63L tank (minus three for the all-wheel drive derivative) but we struggled to get into single figures thanks to this car’s lethargic nature. Naturally this becomes extremely evident in stop/start traffic and around undulating suburbs.

In other words, a typical modern compact SUV.