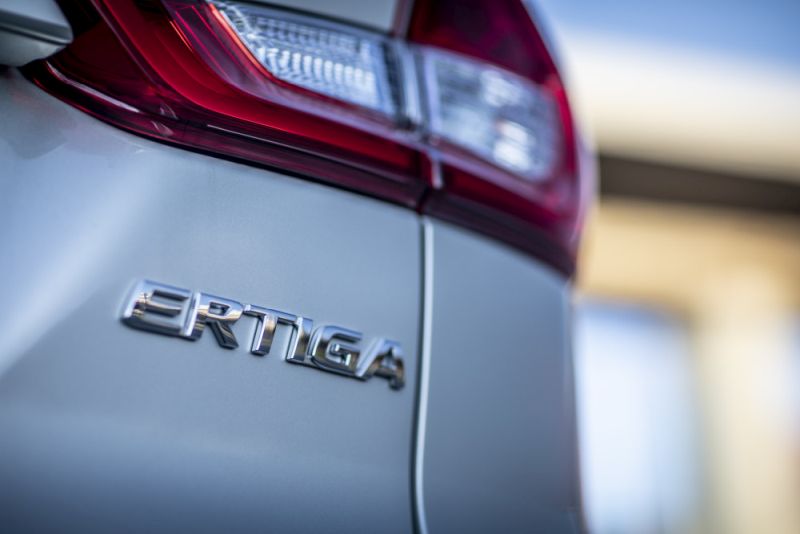 Toilet paper. Airtime. Socks. Not only do these everyday necessities have a symbolic resemblance to my latest test car, I’m also waffling a bit because I’m fairly convinced that nobody hunts for reviews of budget seven-seater minivans. Or do they? In which case, welcome, dear friend of big cars for small money…

For starters, you’ve come to the right brand. The illustrious Japanese motorcycle manufacturer has been making cheap and cheerful automobiles for a while now, fired to new heights through a merger slash partnership with the Indian Maruti concern.

Suzuki doesn’t do luxury, they do value.

This Ertiga is a prime example. You’ll search in vain for voice-activated dual-woofers or leather so posh that it has its own name. Nope, what you get in this car is oodles of space, wrapped in a decent shape and wallpapered with plenty of man-made but agreeable materials. Hard plastic and cloth seats; that sort of thing.

This vehicle’s prime purpose is, quite obviously, that extra pair of seats in the rear. While they aren’t suited to big adults, a set of smaller humans may find sufficient comfort, seatbelts and cup holders back there. Access is granted via fairly obedient middle-row furniture while cargo space varies from 153L (seven seats) to 550L (five) and 803L.

There are various models to choose from: a rather basic GA model, this fancier GL derivative or the identical GL 4AT with a four-speed Auto’box. Two luxurious GLX models round off the range. All Ertigas are powered by a 1,462cc inline four-cylinder petrol engine delivering up to 77kW (105hp) or 138Nm in the usual, lively and exuberant, 1500 four-pot way.

Despite contending with a kerb weight of 1,130kg, this frisky little motor and its slick five-speed manual gearbox make light work of moving the little van about. Case in point, get the softly-sprung pedal sequence wrong and these 185/55R15 front tyres immediately start howling.

Snazzy hubcabs are standard for the GL.

With a bit of delicate footwork, we kept wheel-spin to a minimum while doing our timed acceleration runs with this maroon metallic Ertiga; you’ll find the video at the bottom of this page. The best (of three) times was 0-100km/h in 11.41 seconds and 400m in 18.08 seconds at 126.37km/h. Suzuki only published a claimed top speed of 175km/h; and 170km/h for the Auto.

Not too shabby for a little wagon.

I wouldn’t recommend venturing near that, not just for the sake of your license and wallet, for the Ertiga range only possesses basic driver aids. These include anti-lock brakes with electronic force distribution but no vehicle stability control. Add a tall centre of gravity and it may react dangerously to high-speed direction changes.

Also, it will happily burn rubber when provoked in tight corners. Which all leads to the summary that an Ertiga is not made to race (despite its engine’s eager character and voice) but will be a superb transporter of goods and people when driven sensibly.

The steering feel is super-light and the turning radius just 5.2 metres.

180mm of ground clearance should help to traverse some rougher ground, like suburban potholes or rustic game lodge driveways, but caution is advised in heavy cross-winds as they are offered a lot of side (and underbelly) surface to unsettle the big Suzi. Another negative is the Ertiga GL’s atrocious and completely unfathomable audio/Bluetooth system.

Most drivers eventually got it to work, also via the handsome (and tilt-adjustable) multi-function steering wheel, but it really is a lesson in bad design. I only managed to pair my smartphone on the last of seven test days while everyone complained that storing a radio station was almost as difficult as retrieving it…

Again, I think most buyers at this price range will want background music at best; which is a good thing, because the speakers sound average. If you want big toys and noise, may I suggest the fantastic Kia Grand Sedona at three times the price? And if you want to go in the other direction, there’s always the Ertiga GA at 25k cheaper.

The Automatic Ertiga GL commands a R15,000 premium over this GL’s R240,000 asking price. Throw in a 3-year/100,000km warranty and 4-year/60,000km service plan to end up with a range of multi-seater cars which provide exactly what their maker is famous for: exceptional value for money.