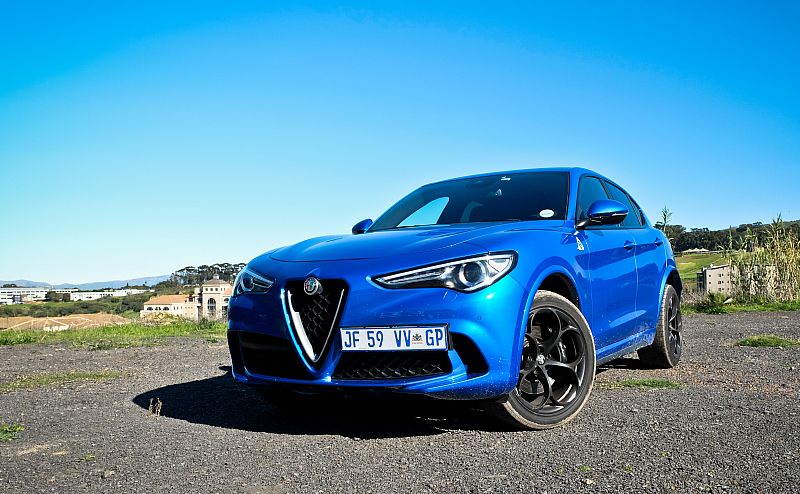 Like it or not, our automotive world has moved in a distinct direction. Once everyone in Namibia (actually, southern Africa) had figured out how practical a modern SUV can be, there was no stopping its proliferation. Although the performance-SUV is nothing new, I recently tested this exciting newcomer from Alfa…

Back then it must’ve seemed downright ridiculous to buy a soft-roader with large power outputs, scary centre of gravity and semi-useless tyres. Some have stood the test of times better than others but I have it on good authority that most of them are ruinously expensive to maintain; never mind repair.

Let’s hope that our market’s hunger for large city 4×4’s spells better build quality, parts pricing and repair costs for all ballistic soft-roaders of the future. Unless you are in the enviable position to drop six figures on a brand-new model every other year… in which case I would love to get you acquainted with this Stelvio QV.

Its proper name is actually “Alfa Romeo Stelvio Quadrifoglio Q4 AWD” but we at NamWheels referred to our beastly blue test car as the Stelvio “QV” – short for “Quadrifoglio Verde” or green four-leaf clover. This symbol of all hot Alfas harks back to the old racing days where drivers used it as an obvious good luck charm.

Back in modern times, the simple explanation is that Alfa borrowed a twin-turbo petrol Ferrari V8, sawed off two cylinders and shoe-horned the remainder into its attractive Stelvio SUV. In truth, Ferrari co-developed this 2,896cc “hot vee” bi-turbocharged petrol V6 and it shows in many ways.

First of all, it produces a bewitching repertoire of six-pot growl, howls and downright rude mid-shift flatulence. Secondly, it obeys any right-foot commands with extreme vigour and has almost no turbo-lag. The only hesitation I could detect was in normal/comfort mode while the mean motor was still warming up.

Once that has been achieved – proper operating temperatures – the angry Stelvio will amaze, delight or frighten any driver and passenger with up to 375kW (510hp) or 600Nm. Thanks to a well-honed 8-speed automatic gearbox and dynamic all-wheel drive, the ballistic SUV gets most of its power down cleanly.

Thanks to what’s been termed “the fastest steering rack ever” and some rather worn rear rubber on our test unit, I wasn’t the only driver who was caught out once or twice by a snappy back end. This was exasperated by RACE mode which activates the vehicle’s deliciously raucous exhaust mode but completely numbs the traction control…

You have been warned. At full tilt, especially in race mode, the Stelvio Quad becomes a rather twitchy and unruly monster. It will also drain its 64L tank at a two-figure rate (Alfa claims 9.8L/100km) while the kerb weight of 1,860kg lays into those poor 20-inch tyres on each corner.

Obviously its ride comfort is a little harsh for a young family but so is its price tag of roughly 1.7 million bucks. The rest of the Stelvio Quadrifoglio is an absolute pleasure, be it the body-hugging seats, large boot (525 to 1600L), dazzling headlights or the comprehensive infotainment system.

The only thing I personally didn’t like was the sinister black wheels.

Although I didn’t drive the angry Alfa for very long, I quickly realised that huge amounts of power can be contained in a sensible SUV form; but often demand restraint and respect. What made this package especially attractive to me were its non-mainstream brand, boisterous power plant and beautiful appearance.