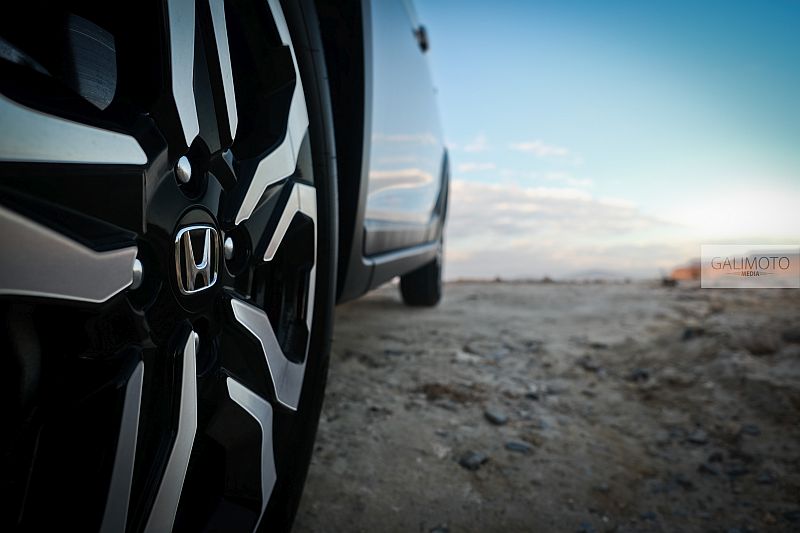 I hate to jump onto a bandwagon but, in my defence, the relentlessly surging carriage filled with most of my peers was hard to ignore. So here goes: this new Honda WR-V is a bit disappointing.

That statement comes from a favourable starting position because I’m actually an undercover Honda fan. I absolutely adored those high-rev screamers of the 80’s and 90’s, and while their mundane replacements of the last two decades didn’t always receive my rapturous praise, at least I approved of their comfort and engineering levels.

In case you haven’t spotted it yet, this… umm… unique-looking mini-SUV wannabe is in fact a Honda Jazz on stilts. Nothing wrong with that, I’m also on record for being quite the Jazz disciple; albeit in reverse order. The latest model may have lost its cute edginess in my eyes… but it still offers good versatility and quality.

I’m happy to report that both those attributes have been carried over to this vehicle, from the contortionist rear seats to the pleasant cabin fabrics, plus Honda didn’t even slap a huge premium onto the donor car’s price. What for? Uhh, to raise the suspension and glue some plastic skirts to the wheel wells.

They pretty much changed the whole exterior look of the vehicle as well, but I’m yet to find someone who approves of it. “Looks like an angry puffer fish!” exclaimed our youngest colleague in Windhoek when confronted by the swollen visage of this silver press unit. Upon seeing the rear end, he just made a whining noise.

Personally, I thought I spotted some Ford Ecosport similarities in its shape but that’s not a compliment because I think Quasimodo is more handsome than an Ecosport or WR-V. Faster too, as this 1.2L has no torque and even less power, requiring you to thrash the living daylights out of it just to keep up with traffic.

Just this morning I received a deathly stare from an elderly pedestrian because I passed them up a hill with the 1,199cc motor screaming blue murder. What the enraged onlooker may not have realised is that (a) I was just trying to maintain momentum up said hill and (b) despite the perceived engine torture I was only doing 55km/h.

In an older Honda I would’ve enjoyed that sensation – going flat out but never really breaking the law – but here it feels like arduous automotive agony. The teeny-tiny four banger sounds harsh at high rpm’s, then over-runs with a post-throttle rpm surge and usually hits its monotonous rpm cut-off.

Anyway, to gently change course to a more positive direction of my review, every driver and passenger approved of the Jazz-derived interior. The seats are comfy, most switch-gear is logical and easy to use while passenger space and ride comfort are both praiseworthy; no thanks to practical 195/60 tyres on 16-inch rims.

They team up with a fairly forgiving suspension to offer good grip in daily conditions and a gradual change to front-end wash / under-steer beyond the limit. This eventually becomes a one-tyre-fire (on the inner wheel) as the WR-V has no form of traction control. Why? Because, trust me, 99% of the time you don’t need it.

In true Honda fashion, it does have stability control, ABS, airbags and other such safety aids. But once you dive into the spec-levels, things unravel a bit more for the poor WR-V. Our press vehicle had a blank panel where its cruise control should’ve been. However, it sported a crisp climate control system… but no touch-screen or smartphone connectivity.

All those critiques can be remedied by purchasing the (more expensive) Elegance model yet it’s at this point where I started feeling sorry for Honda South/ern Africa. You see, they’re a really small fish in a huge pond and because they don’t manufacture or export anything in S.A., only a few carefully-selected models are offered for sale.

And with this new WR-V, for whatever reason, they got the recipe wrong. Perhaps it’s just this entry-level derivative but the tiny city SUV market is quickly filling up with cheaper, stronger and better-looking rivals. Honda’s pricing is too ambitious (isn’t it always?) and it’s my humble opinion that the WR-V doesn’t hit its mark.

To be fair – also to my clandestine Honda love – I would hate to criticise without a better suggestion, so here goes: if it was my money, I would spend the 300k-odd on a used CR-V. The only downside of that is that it won’t enjoy the WR-V’s 5-year/200,000km warranty or 4-year/60,000km service plan.