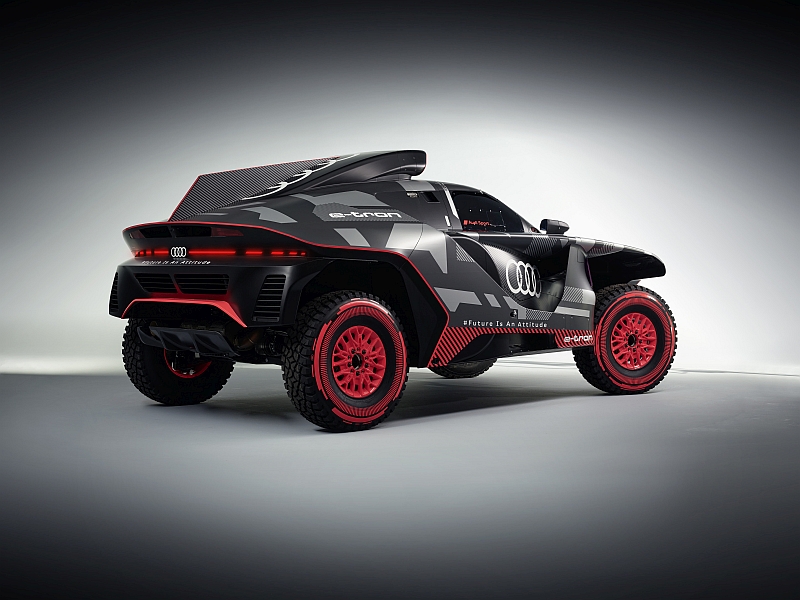 Less than a year after publicising its ambition to compete in the toughest motorsport event ever, Audi Sport has officially started testing its Audi RS Q e-tron; the vehicle with which it will take on the 2022 edition.

The RS Q e-tron, however, is no normal ICE competitor, but will rather make use of a hybrid Formula-E and DTM powertrain, with which it also hope to adapt and progress its future road-going vehicles.

Audi Sport managed to revolutionise the motorsport world during the last 35 years, starting with the highly successful Group B Audi Quattro in the World Rally Championship. Audi then became the first manufacturer to win the Le Mans 24 Hours with an electrified drivetrain. While these were the two dominant innovative victories, Audi further recorded wins in both the World Rallycross Championship, as well as the FIA ABB Formula E championship.

The fact that Audi is already testing the RS Q e-tron is a record in own right as it was developed within one year. Taking into account that the Dakar Rally will last for two weeks and record daily stage lengths of 800km, this proves to be the ultimate challenge for any electric drivetrain.

As there will be no charging stations in the desert, Audi will make use of its highly efficient TFSI engine from DTM to charge the high-voltage battery while driving. This means that while the combustion engine will run between 4 500 and 6000 rpm, the consumption itself will be below 200 grams per kWh.

The RS Q e-tron’s front and rear axles will be fitted with a motor-generator unit from the current Audi e-tron FE07 Formula E car. A third MGU will form part of the energy converter and will recharge the high voltage battery while driving. Furthermore, energy will also be stored during braking. The battery itself weighs 370kg and will have a capacity of 50 kWh.

The maximum system power of the e-drivetrain will be 500kW and will be able to be controlled with extreme precision and therefore ensure ideal drivability.

The Audi RS Q e-tron only needs one forward gear. The front and rear axles are not mechanically connected, as is also common in electric vehicles. The software developed by Audi takes over the torque distribution between the axles and thus creates a virtual and freely configurable center differential, which has the positive side effect of being able to save the weight and space that woud have been required by propshafts and a mechanical differential.

Sven Quandt, team principal of this project, compares this venture to the first moon landing: “Back then, the engineers didn’t really know what was coming. It’s similar with us. If we finish the first Dakar event, that’s already a success.”

In addition to testing the new RS Q e-tron in some of the harshest conditions, Audi Sport will also enter it for several cross-country rallies until the end of the year.

As noted in one of our previous articles, Mattias Ekström, Stéphane Peterhansel and Carlos Sains Snr. will pilot three RS Q e-tron’s in the upcoming Dakar. Whilst Ekström as a two-time DTM and WRX champion, is still fairly new to the Dakar world, both Peterhansel and Sainz have 17 Dakar wins between them, with the former having won multiple on a motorcycle as well as in a car. The Frenchman previously competed with 5 manufacturers and won several times with three of these.

The trio will enter a new hybrid era on 1 January 2022, racing from Ha’il to Jeddah, where the Dakar will finish on 14 January.

Here is what the drivers had to say:

Competing with the new RS Q e-tron,  Ekström mentioned the following: “With the e-drive, power and torque are instantly available at the slightest touch of the accelerator pedal. Another advantage, especially when driving in the dunes, is the single-speed transmission, which saves constant up and down shifts.”

He added in saying: “The Dakar will definitely be one of the most exciting adventures of my career. To tackle this exciting project together with the team with which I celebrated my greatest successes is fantastic. Although I’m 43 this year, I feel like a junior compared to Carlos and Stéphane. I still have a lot to learn, but I’m really looking forward to it.”

“Probably the last step I can take as a professional driver. The future is electric. In 10 years, everyone will be driving electric cars. The Dakar is an extreme test for this technology.”

“I’m still hungry. If I wasn’t, I wouldn’t accept this challenge that is very important to me – to try to win the Dakar Rally with Audi. It’s a fantastic, extreme project – the ultimate challenge for an electric powertrain.”