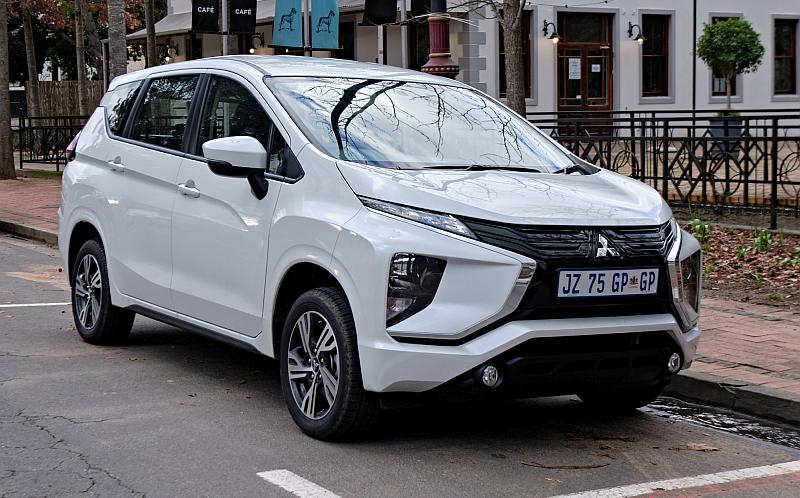 Welcome, dear shuttle driver or unlucky catholic parent. Other than a mass transit participant or prolific procreator, I have no idea who would buy this new Mitsubishi Xpander?

Actually, let me reign in my cynicism and leave that decision up to anyone who’s shopping for an affordable MPV. In our neck of the woods (southern Africa) that choice will include the Honda BR-V, Renault Triber, Suzuki Ertiga and the Toyota / Daihatsu Avanza. For the sake of OEM’s, we’ll gloss over the hordes of imported stuff around Nam.

This new Xpander from Mitsubishi is the freshest competitor in this market and diligently follows the seven-seater van-thing recipe: fairly exciting design details, budget running gear, only the most essential bits of kit (sometimes layered in escalating tiers) as well as a sparsely decorated but seemingly bomb-proof cabin.

There, job done. Throw in half a dozen kids or pick up that group of business people from the airport, most of them will be happy and comfy in this three-row machine. Mitsubishi only sells the Xpander with a 1.5L four-cylinder petrol engine delivering up to 77kW or 141Nm to the front wheels.

Power is delivered by your choice of either a 5-speed manual or 4-speed automatic gearbox; with an antiquated overdrive. Both versions have identical (and fixed) specification levels which include ABS brakes, two airbags, power steering, remote central locking and a multi-function steering wheel.

Mitsubishi Motors South Africa has no performance claim for the Xpander so we were all-too-happy to take our white automatic press vehicle for a couple of acceleration runs. Our trusty Racelogic Performance Box spat out a best (of two) 0-100km/h sprint time of 12.45 seconds; with about 1/3 tank very near sea level.

On both runs we tapped off just above an indicated 160km/h (GPS readings were around 157km/h) so we assume that – given enough tarmac – the Xpander should reach a terminal velocity of around 170km/h on a flat road. Our sole emergency brake test from 100km/h was over in 3.16 seconds and 50.14 metres.

That last value is substantially below average and, in my humble opinion, due to the budget tyres fitted to these vehicles. I could continue pointing out cheapie items like the black grill, half-blank steering wheel or some creaky plastics but you will find exactly the same (and sometimes, worse!) in rival products.

To be brutally honest, I thought that Mitsubishi has done a sterling job of livening up what is essentially a boring box on undersized wheels. The body has large creases and slashes to break up its flabby monotony, and you’ll even find crazy stuff like a rear roof spoiler, floating-roof-effect D-pillar accents or pretend diffusers.

They’ve done the same on the inside with chunky dashboard layers, modern seat fabric and shiny highlights which include a pleasingly realistic metal trim imitation. Downsides? The instrumentation is a bit basic and I’m not a huge fan of this Mitsubishi infotainment system; predominantly because it lacks a volume knob.

As for driving the Xpander, it’s fairly mixed news as well. It’s neither fun nor exciting, and the willing little 1,500 engine doesn’t provide a pleasant soundtrack. The ride is most certainly set up for steady commuting so it will counter spirited driving with substantial amounts of body lean, under-steer and – for the persistent ones among you – a glorious inside wheel burnout.

Once the vehicle approaches its maximum weight, passengers will complain about bumpy road conditions in direct proportion to their distance from the driver. The further back they are, the more they will whine about meeting the rear axle bump-stop over that speed hump you failed to slow down for…

So. Is the Xpander a terrible car? If you’re into sporty SUV’s, most certainly, yes. But if you need something spacious and sensible that doesn’t cost the earth, we wouldn’t shy away from putting this Mitsubishi on your shortlist of MPV’s. It currently retails around 300,000 bucks with an extra 20,000 required for this automatic model.

A 3-year warranty and small service plan are also included in the price.