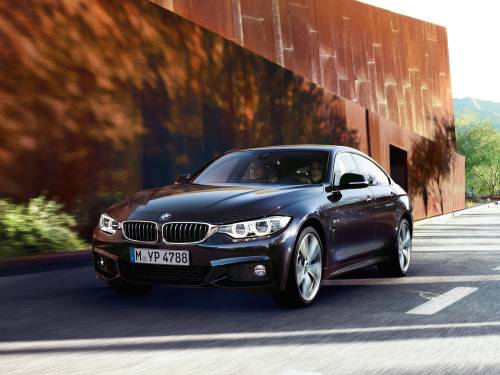 Have you ever had a dream where you wanted to speak but couldn’t? What about that one where your hands seemed tied? Well, that’s what it feels like writing about this BMW 420i Gran Coupé. It isn’t writer’s block or anything like that; it’s just that I feel like having to explain something I don’t understand…

Here’s my problem. The 4-Series is a two-door 3-Series and this 4-Series Gran Coupé is a four-door version of the two-door version of a four-door car. Words like incestuous and phony spring to mind. However – I will admit that it is quite attractive and accomplished, plus I noticed a few other interesting traits.

Crossing a sober sedan with a cool coupé results in a tasty overall shape with sleek window lines, cocooned cockpit and that hallmark of a proper two-door: pillar-less doors, There’s not an inch of ungainly ratios or questionable design, the 4-Series GC has sexy fast-back three-quarters and its parents’ handsome face.

The low-slung body is obviously planted on the same innards as Three- and Four-Series cars, meaning you may currently order one of four models: this 420i turbo-petrol four cylinder, a beefier 428i with the same motor, a 420d turbo-diesel four cylinder or that mischievous 435i turbo-petrol six cylinder.

As luck would have it, we recently tested a regular 420i Coupé and sent it back with glowing approval. BMW has deep roots in building four cylinder engines and nobody should dare gasp at the fact that those racy Bavarians know a thing or three about turbocharger application, too.

This 1,997cc engine claims maximum outputs of 135kW (185hp) at 6,250rpm or 270Nm of twisting power from – get this – as little as 1,250rpm. Available with a six-speed manual or eight-speed automatic gearbox, we reconfirmed this motor’s keen and even power delivery – it’s a modern marvel.

A N$23,000 option on all four cylinder models, BMW’s Driving Dynamics Control allows you to cycle between fuel-savvy Eco (BMW claim 6.1L/100km from the 60L tank), Normal and two hairy-chested Sport modes. Select one of these and the 420i Gran Coupe reaches 100km/h in 7.6 seconds while topping out at 236km/h.

Our real-world average fuel use was 8L/100km and we found that, just like a modern Swedish competitor, this new engine becomes a bit greedy around town. Leave the stop/go madness in favour of constant highway speeds and your consumption will instantly plummet; even towards 6 if you really concentrate.

Here you will also discover the intrinsic BMW genes as the car cruises quietly and feels planted when hurried around corners. The four combustions chambers produce a gruff but pleasing growl and the high levels of grip will only hand over to ESP intervention (or skidding in its absence) with over-ambitious moves.

Steering feedback and turn-in are excellent, the steering-mounted shift paddles are highly obedient and this car’s brakes were top notch. Standard fitment items include lots of electric goodies, safety kit and infotainment gadgets but BMW offers even more with its various equipment lines.

These will determine the final price of your new 4-Series Gran Coupé as a standard 420i costs between N$497,500 and N$541,000 without options. Some noteworthy add-ons include 3D navigation with live traffic and speed limit info, a concierge service, TV, heads-up display, LED lights, various cameras and self-parking wizardry.

The last three are highly recommended, if just to combat the car’s low slung seating position and limited visibility. An upside of the swooping body is a huge tail gate whose opening trumps the cargo loading ability of both the 4-Series Coupé and 3-Series Sedan, quickly swallowing a dismantled mountain bike.

I guess that’s another good reason to consider this over the other two. The rest of this car is a successful blend of coupé style and sedan practicality, offering slightly cramped rear seats but with their own doors. A two-door for your whole family; and the dog.