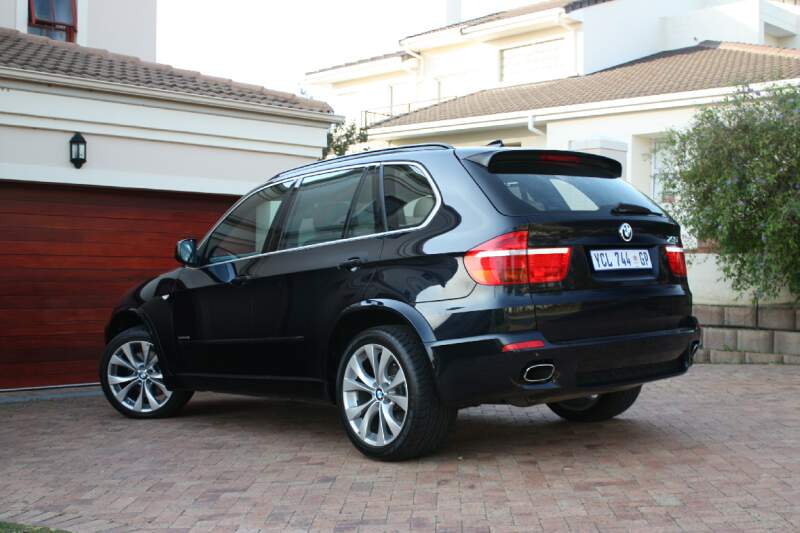 I’m not very fond of softroaders or SUV’s, predominantly because they pretend to be 4×4’s but in most cases are unusable for such endeavours. That irritates me on the same level as fancy crockery that just stands in a cupboard and may not be used, or functions of my glossy new cellphone that I will never ever use. Utterly pointless.

20-inch wheels and metallic paint are just two reasons why it wouldn’t be a very clever idea to forge your own path into the veld with an X5 xDrive48i. No, this massive BMW is perfect for people who like to get to work or the school in an important… pardon, safe manner. And while I tried very hard to resist its advances, it didn’t take long until I fell head over heels for the big black Bee Emm.

I still maintain that a station wagon or sedan would be a better choice to ferry the kids to school or do retail therapy, but the height and size of an X5 brings elements of safety and confidence to your driving experience. It still is a softroader that’s engineered more for tarred roads but because it’s a BMW with an M package it will fly through corners like a sportscar. Perhaps even better.

In my circle of friends it was especially the ladies who made eyes at the xDrive48i, while the gents just wanted to peek under the bonnet. The girls’ smiles confirmed that they thought of safety and luxury while they were investigating the interior of my test vehicle.

Meanwhile, the guys were on hands and knees to ogle the fat tires and suspension. “How much does a tire cost?” enquired one, “What does it do zero to hundred?” asked another. The rear rubber of 315mm costs about N$5 700 each, and the X5 xDrive48i will sprint past 100km/h in 6.5 seconds. And if you think those numbers are impressive, it only gets better when you climb inside the X5.

The seats and doors are clad with soft leather, the carpets are equally appealing, and in the cockpit you’ll find more toys than in a Toys ‘R Us. Power steering, climate control, airbags, electric windows, trip computer, automatic Xenon headlights, a panorama sunroof, central locking and all that “normal” stuff is standard, and the car boasts much more interesting equipment.

My X5 xDrive48i test vehicle was equipped with extras like a 6-DVD changer, active steering, soft closing of all its doors, voice recognition, navigation system, and a heads-up display which displays speed and navigation to the driver. Especially at night you feel more like a pilot than a driver.

Space and comfort is found in spades, and the front seats have very good support for the more sporting drivers amongst us. The M steering wheel (with different buttons which can also be programmed individually) has a very thick rim and together with the active mechanism transforms the X5 into a nimble and capable car on suburban roads and sharp bends.

The instruments are plain but easy to read, and while I always liked the BMW fuel economy needle I believe it was a bad idea to fit it to this vehicle. Most of the times it sticks to its maximum of 20 and refuses to move down, which is confirmed by the trip computer on the central iDrive monitor with an average consumption of (gulp) 17 L/100km.

iDrive is controlled as always by the round silver knob near your left hand and in this incarnation it was reasonably uncomplicated with its options of information and vehicle settings, navigation, music, telephone (Bluetooth), and climate control. Can you see why I couldn’t resist this monster of a car?

Yes, it’s a bit flashy and yes I sometimes forgot to use my indicators. You there; get out of my way! I’m more important than you, and always in a hurry to get somewhere. Not sure where, but I’m in a hurry. This behaviour is partly due to the massive 4.8 liter V8 engine which chases 360hp and 475Nm through its 6-speed automatic gearbox in a smooth an exciting manner.

The gearbox also has a “Sport” mode, and adapts to your style of driving. So it was my own fault that the X5 became rather sharp and hasty with its gears, because I might’ve put foot a little too much. With 6 gears you’re never far away from a hard V8 growl, and in a car of this size and weight the experience is quite breathtaking.

But the X5 xDrive48i can also play gently, and coast through town with surprising comfort at 60km/h or float along the N2 at 120km/h. Usually in the direction of a fuel station; the X5 was one of very few cars I didn’t manage to test on a full tank of petrol.

I still don’t like the 4×4-on-steroids concept, but if the X5 is simply viewed as a really big BMW then it surely is a very good car. No, make that a BRILLIANT car! The majority of xDrive48i M Model’s potential buyers won’t be fussed by its exuberant thirst, or the N$789 800 worth of change they’ll need in order to own one. They will also get a 5 year 100 000km service plan, which unfortunately doesn’t include tires or fuel.