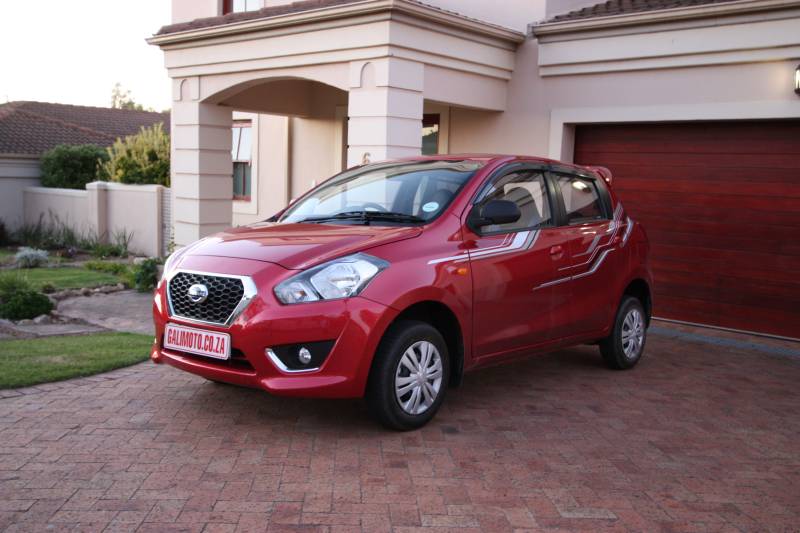 Unlike the older members of our society, my memories of this brand are quite unpleasant. The last time I stepped out of a Datsun, I was in considerably pain and the car was in pieces. I have to stress that this was neither the car nor the driver’s fault, but rather that of a distracted motorist.

Said person’s car ploughed into ours at 60km/h while we were stationary at a red traffic light. No tyre squeal, no avoidance, just a massive impact without warning. The little Datsun bakkie took the brunt of this force, going on to become an automotive sandwich in a three-car insurance write-off.

Many years have passed since then yet I still felt a slight unease when someone announced the imminent arrival of a brand new Datsun – this Go hatchback. Launched late last year as affordable transport for the masses, the resulting furor about its lack of safety items didn’t exactly quell my concerns.

I’d like to deal with this issue right away – the absence of airbags, anti-lock brakes (ABS) or other types of emergency driver aids – by stating that I’m a bit of a fence-sitter in this regard. Yes, all new cars should have the above-mentioned as minimum standard kit and yes, shame on Datsun for ignoring that.

However. Datsun does not hide these omissions and anyone with half a brain cell will figure out that their absence helps to keep this car’s price down. Until the inclusion of such items is mandatory, every buyer swings themselves behind the wheel knowing full well that they’re a bit shy on protection.

Perhaps I should finally get to describe the car which was delivered to us in the shape of a higher spec, metallic dark red Go with small wheels, a chrome tail pipe, huge grey stickers, an even bigger roof spoiler and the darling of all Ford Cortinas in the seventies and eighties – window wind deflectors.

Inside it’s just as festive with beige and brown plastics, black carpets and rather ill-fitting black and blue pleather seat covers. The material feel and panel fit could be described as terrible were it not for the Go’s favorable pricing. At this level of investment, it’s actually not too shabby for a new car.

We weren’t too impressed with the radio but the beauty is that you can substitute it with another of your choosing; the rear parcel shelf even has indentations where your big speakers should go. The Go’s ventilation controls are exceptionally simple, easy to use and the air-conditioner worked flawlessly.

Behind the non-adjustable, button-free steering wheel is a single analogue speedometer with drawn-on gear change suggestion points, a few warning lights and a clever LCD display for engine revs, fuel level, range, as well as instant and average fuel consumption. Datsun claims an average of 5,2L/100km.

All models feature follow-me-home lights and share the same drive train, a 1.2L in-line three cylinder petrol worth 50kW (68hp) or 104Nm. Supposed to hit 100km/h in 13.3 seconds, our test car blitzed this time with a best of 12,5 seconds – twice. That puts it well into “not bad” territory and a smidgen ahead of other three-pots.

Apart from its lively motor, the news doesn’t get much better. Ride comfort is decent but road holding a little wonky. The bakkie handbrake feels the same while pedal and gear changes fair a bit better. The Go absorbed a full-bore emergency stop from 100km/h without pedal fade but with howling tyres.

ABS brakes would lend a degree of accuracy and shorter distances to such an exercise but it’s this Datsun’s recent crash test failure (Global NCAP, zero out of five stars) which bans it to the bad idea bin. Conducted at roughly 65km/h, your chances of walking away from such an impact aren’t very good.

If you’re an experienced driver or live in a remote Namibian village where nobody does more than fourty, go right ahead. The Datsun Go represents great value. But if you live in the city, commute to work, use high-speed highways and are a first-time or senior buyer, I recommend that you look elsewhere.