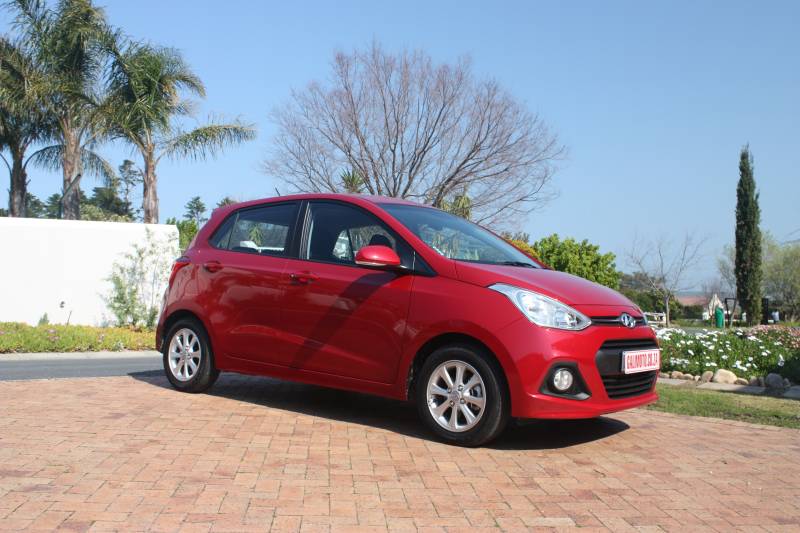 Today, the Hyundai Grand i10 and I would like to teach you a lesson. Don’t worry; it’s not the hurting kind but rather the opposite – small cars can be fun. The harsh reality is that practicality and price rule when your budget is tighter than two coats of paint but you shouldn’t settle for something cheap ‘n nasty.

Sure, if we all drove what we desired the roads would be jammed with overheating Ferraris, pink Minis and upturned monster trucks. You could also brave the used car market for an older, bigger, more powerful machine but its longevity and maintenance may just give you nightmares.

Perhaps you’re after a new car that’s not too big, bland or bank-breaking. Starting at N$139,900 means the new Hyundai Grand i10 positions itself in one of the most hotly-contested segments of our car market between ultra-compact hatchbacks (think i10, Spark) and regurgitated oldies (Vivo, Figo).

There’s nothing terribly wrong with any of these yet the new Grand i10 appeals on other levels too. Yes, it’s still a small city car but its dimensions are more generous than baby brother i10. At the same time, it’s N$26,000 cheaper than an i20; which sounds vaguely familiar. Yip, you’re looking at the replacement of Hyundai’s beloved Getz.

Two of my near and dear ones are proud Getz owners. So proud in fact that one example was lovingly handed down to a younger family member instead of being traded in while the other owner replies to suggestions of a new car by hissing and frowning vigorously. Why? Because the Getz was a great little car.

Nothing special, nor overly exciting. It was easy to drive, very versatile and economical with an inoffensive shape and friendly face. And before I get tethered in more elusive explanations of price or appeal, I’d like to state that the new Hyundai Grand i10 does its ancestor proud. It’s just as good.

Next to an i10, the Grand boasts an additional 18cm length, 65mm width, 45mm wheel base, 18mm ground clearance and 31L boot space. At 256L, the cargo area is smaller than that of a Getz but the maximum load of 1,200L is superior to the old Hyundai or i10. Passenger space has also increased.

Its interior consists of decent plastics and understated fabric patterns with a few silver highlights and blue displays to liven things up a bit. It’s a pleasant place to be with simple controls and a fuss-free layout. Any Getz owner would approve – if you could get them to calm down, stop hissing and enter a Grand i10.

I found the steering slightly vague and rather insistent on returning to the centre position but that’s the only critique I could come up with on our higher-spec Fluid test car. Included in this model are remote access, one touch triple-turn indicators, rear power windows and power exterior mirrors.

The Grand i10 is only available with one engine, a 1,248cc four-cylinder petrol worth 66kW (90hp) or 120Nm. Forgive me if I was expecting to hang out with motorised chairs and refrigerated lorries all week but even against a kerb weight of 1,051kg that doesn’t sound very encouraging.

How wrong I was. This 1.25L engine is a very happy little mill, eagerly pulling forward in traffic and even donating a sprinkling of fun when annoyed. We measured 0-100km/h in about 11 seconds. The absence of traction or stability control means screeching starts and under-steer are also possible.

The Grand i10 possesses a good chassis and high profile tyres set up for ride comfort while pedal feel is equally amicable. This little Hyundai is also quite frugal, alleging 5.9L/100km average fuel use from its 43L tank. Ours floated around seven with mixed driving, indicated by the multi-mode trip computer.

Hyundai includes its 5-year/150,000km warranty and roadside assistance with each Grand i10. At N$149,900 for this Fluid Manual model, you’ll find smaller or cheaper alternatives elsewhere but I felt that this is a good little car which is also fun to drive. Sounds familiar, doesn’t it? Long live the new Getz!