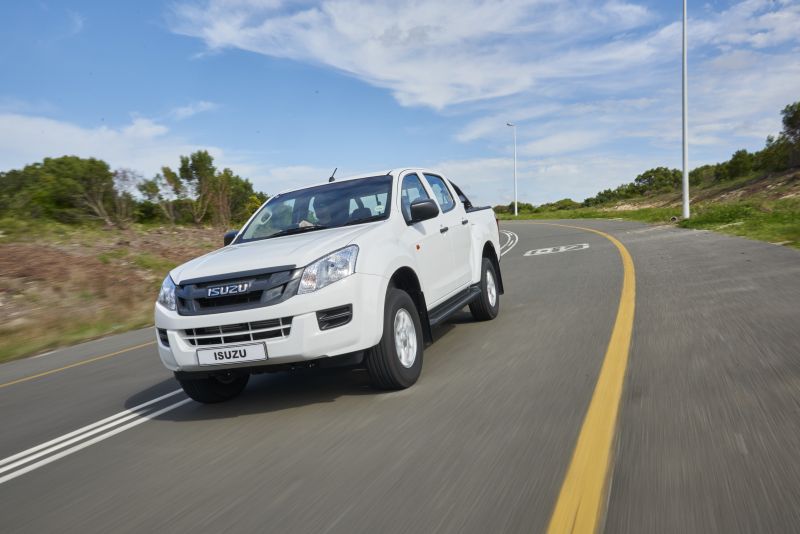 Bakkies are hugely popular in this country, just like “UTEs” in Australia and “trucks” in Yankeeland, and Namibians have a vast choice of brands and models in 4×2 or 4×4, single or double cab guises to pick a load-carrying chariot of their choice.

As an indication of the size of this segment, last year 102,921 bakkies were sold in this country with Ford Ranger, Isuzu KB and Toyota Hilux raking in the most sales while Nissan’s Navara and Hardbody and the Volkswagen Amarok options ranked lower in the sales statistics.

Given the choice, this model would probably be my pick of the litter. The cabin is comfortable and as well insulated as one could expect from a vehicle of this nature and the ride is fractionally better than the average bakkie, but only when carrying a load.

Unloaded it does tend to hop skip and jump, but not disturbingly so. Speaking of loading, the cover of the Isuzu’s load bay is probably the most impractical to remove and re-fit. It is one aspect of the Isuzu which gets a definite thumbs down.

Although our test vehicle was still relatively new, it already had scuff marks on the loading bay floor, sides and back of cabin as well as the load gates. Some of the struts were also damaged; although all of this could have been done by inexperienced drivers who had the vehicle
before me.

I do think that this damage could have been prevented with some rubberising or protection mats. Seeing that the Isuzu is a proud GMSA achievement, being made in South Africa (the Eastern Cape’s Port Elizabeth, to be exact) and exported to 21 countries in sub-Saharan Africa, this issue surely deserves some improvement across the range.

In 2015 Isuzu sales totalled 16,288 which placed it firmly in 3rd place behind the Ford Ranger and Toyota Hilux. As for the rest of the KB there is very little not to like.

The brand and its products have a good reputation for rugged toughness and I would have loved to subject it to a demanding off-road
course; unfortunately time did not allow this.

But it certainly makes off-roading as easy as flicking a dial on the central console between 2 High, 4 High and 4 Low and pressing a diff
lock button.

However, it is a pleasure to pilot this tough 4×4 in the city and even in congested traffic. The steering is easy and the visibility is good. Braking is sharp and the clutch action is gentle.

All-round visibility in this bakkie is excellent while modern communication and entertaining goodies include MP3, USB, Aux and Cell-phone connection.

The Isuzu KB also scores some Brownie points in the safety department with all LE and LX (as well as the Fleetside models) armed
with Electronic Stability Control as well as SBS, EBD and EBA.

The cabin features include cruise control, adjustable steering column (height ), a good quality audio system and an exemplary air-con setup that jumped into full action within seconds of being called to duty during an extended heat wave over the central inland.

The cherry on top of the KB fleet cake is an excellent customer care programme which includes all routine maintenance, the regular servicing and any roadside emergencies.