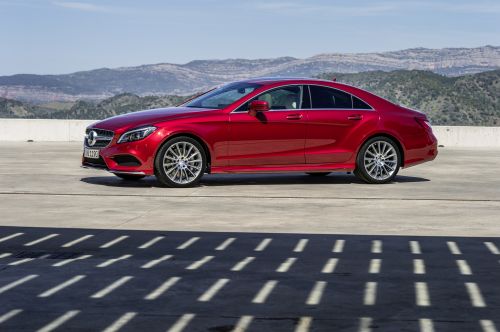 I finally met Eleanor – my automotive unicorn. No, she isn’t a grey Mustang but, much like in the modern Gone in Sixty Seconds movie, this car has given me a proper runaround. With three cancelled bookings and a premature departure from my house, I now know that my Eleanor is a Mercedes-Benz CLS400.

Please note that none of this was the car’s fault, all three cancellations were beyond its caretakers’ control and the sudden disappearance was purely my fault as I had mixed up my dates. You see, most cars pass through our hands for a week and we have plenty of time to drive, photograph and performance-test them.

Eleanor arrived in my absence; while work and weather didn’t allow me to photograph or performance-test her. For this, dear reader, I am truly sorry and will make it up to you by (a) selecting decent press pics, (b) stop babbling about Eleanor and (c) give you a proper review of the vehicle.

The second-generation of Mercedes-Benz’ CLS range successfully married Merc’s new design lines with the grace of its predecessor – from any angle it looks sleek and well-proportioned. Its cabin is a further continuation of old CLS genes but will probably get a major tech upgrade when its facelift comes around.

Based on the ageing E-Class, this CLS lags behind newer Benzes as it still uses older instruments as well as a mix of old and new Comand (infotainment system) controls. It’s also got ye olde Mercedes foot-operated parking brake. That said, none of these items feel outdated or redundant at all.

This 400 model brings another novelty with it in the shape of a relatively new engine. Mercedes’ big engines breathed unassisted until quite recently so after the advent of the turbo-petrol V8 (and AMG derivatives) it was time to usher in this new six-shooter – a 3.5L turbo-petrol V6 with max numbers of 245kW and 480Nm.

That’s a laughable increase from the old 3.5 V6’s 225kW but that should spell good longevity and future potential as the new motor is nowhere near its limits. Also, torque is up by a considerable 110Nm and crucially, this twisting makes its appearance from just 1,200rpm onwards.

It taps off at 4,000rpm – almost where the previous engine’s torque started. That means this new engine yanks the car forward from incredibly low revs, allowing for a more quiet, frugal and relaxed drive. In another Elanor moment, I’ve just realised that I barely even redlined it during the entire week…

That proves how brawny this new engine is while the 7G-Tronic Plus automatic gearbox with three driving modes, stop/start ECO function and paddle shifts lets you take more command of the power outputs. For a turbo engine, it even produces a decent V6 growl when going about its business.

City traffic and undulating roads can result in 15L/100km which is why our overall average of 12L/100km is a more realistic figure. Gear changes are smooth and relatively quick while the power train’s silkiness suits the suave and imposing four-door coupé perfectly.

If you’re after great fuel consumption, I recommend the slightly sluggish CLS250 CDI we reviewed some time ago while the CLS350 BlueTEC is probably the best of both worlds; power and prudence. The CLS63 AMG S we tested was scary fast, a CLS500 is more sensible but I think the CLS400 is the pick of the bunch.

Armed with two-stage Airmatic suspension (N$20,100), even the two-tone 19-inch AMG wheels couldn’t conjure up notable discomfort. Sport mode firms up the ride for spirited excursion but we usually chose Comfort for its mix of ride quality and predictable handling. Every passenger agreed.

Yes, some were optional extras but the CLS is supposed to be a car that makes you feel special; which it certainly does. It marries exciting new looks with four-door coupé style and new turbo-power with traditional Mercedes values. I would probably buy an Allanite matt grey one and call it Eleanor.