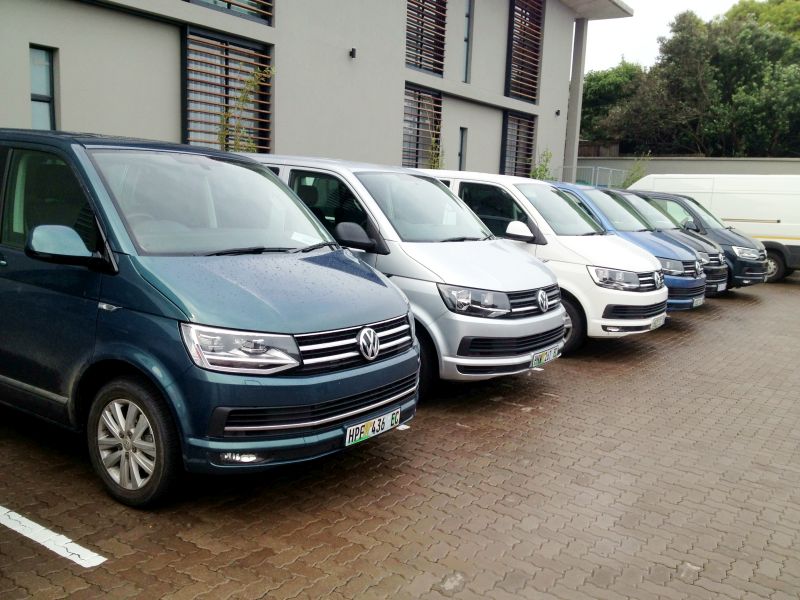 Talk about a trip down memory lane. When Volkswagen invited us to attend the launch of their new, sixth generation T6 models, the manufacturer hauled out plenty of dusty memories and a few shiny examples of previous models. They even gave it an ad slogan which rightly claims that “legendary status comes standard”.

This T6 range is also brought in from overseas where it already clinched the “Van of the Year” title. Bolder, more distinctive styling brings the Kombis up to date, crisper and stronger horizontal elements hark back to T3 while following Volkswagen’s clean design language. Under that new skin, 60% of components are new.

Further innovations include optional multi-collision brake, a post-accident braking assistant as pioneered in the Golf. All Kombis roll off the showroom floor with ABS brakes, ESP stability control and at least two airbags. Some models can also be ordered with lane assistance, LED lights and a hill hold feature.

Kombi purists will be delighted to learn that some old trademarks have returned. These include, depending on model, dual-tone paint and the option of flattening all seats to make a bed. Buyers of the fancy Caravelle derivatives may also choose to have parts of the new dashboard painted in the vehicle’s exterior colour.

As with previous generations, the range includes over two dozen models which span from a single-cab pick-up (N$293,900) to the Caravelle DSG 4Motion (N$848,800). In between all this you’ll find short and long wheelbase models, manual or DSG (automatic) gearboxes and three versions of the 2-litre turbodiesel engine.

VW Commercial Vehicles also offers various Crew Cabs, Crew Busses, as well as Panel Vans in base or Sport (semi-leisure) trim. Throw in optional Trendline, Comfortline or Highline specifications on some models and VW certainly have a thoroughly wide net (and competitive pricing) to catch any potential van owners.

On our adventurous launch route around the Eastern Cape, we first sampled the luxurious and leather-clad Caravelle with metallic paint, climate and cruise control, navigation, swiveling seats and picnic table, followed by the humbler Kombi with cloth chairs, radio/CD, halogen lights and air-con.

Of course the Caravelle is a nicer cab to travel in but my journey companions and I felt no less comfortable or nostalgic in the family-friendly Kombi. Our test model’s 103kW had to work harder than the Caravelle’s 132kW version but we also learnt that the stronger motor can only stomach 50ppm Diesel.

Scenery wizzing by and road trip stories being flung around the massive cabin, we hardly noticed the miles and hours passing. Someone praised all the storage nooks in or near the dashboard, while another lauded VW for keeping a passage between the front seats. Handy for young parents and tight parking bays.

Volkswagen South Africa sold over 280,000 Kombis since 1955 which I will happily believe. My Mom’s best friend had four successive Kombis, my in-laws had three – one of which my wife learnt to drive in. An uncle of mine had six in a row, my aunt misses all of them, while another uncle still tours Namibia in his.

The reasons for Kombi’s popularity are simple. By combining space, comfort, versatility and value in a medium-sized bus, Volkswagen created the ultimate transport solution for families and businesses alike. And this new generation – thanks to its myriad of models – will undoubtedly carry on that tradition.

Happy Snaps from the Launch