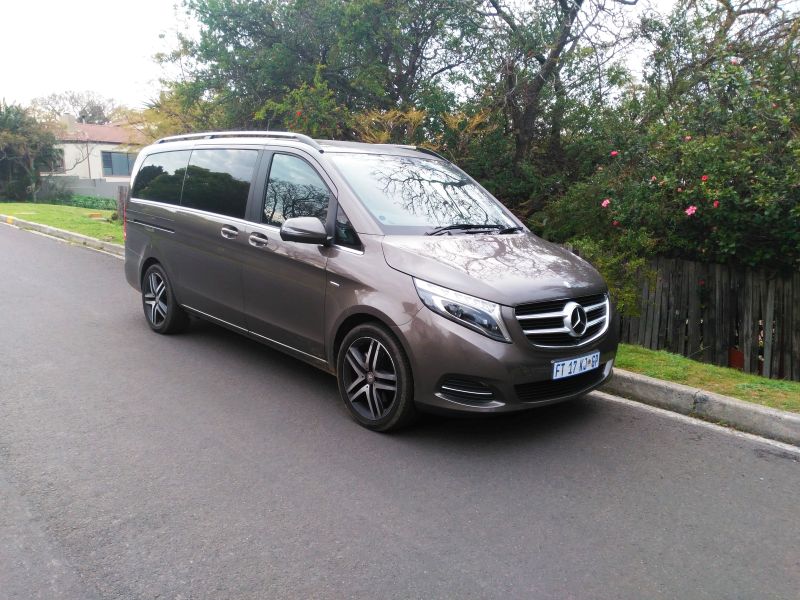 Some car reviews almost write themselves or, better still, will be written for you by other people. When Mercedes-Benz’ press fleet brought me their range-topping V-Class luxury MPV for testing, I initially panicked about what to write… until the first passengers climbed aboard. All I had to do was listen and take notes…

Before you accuse me of being lazy (or a copycat) here are a few short pointers for potential buyers: Mercedes has not been in the van-game quite as long as some of its competitors but they can look back on some successful people movers like the Vito, Viano and Sprinter.

This V-Class was launched in 2015 as a luxury passenger range. At this point in time (late 2017) you may choose between three models all using the same 2.1L four-cylinder turbo-diesel engine in various states of tune. 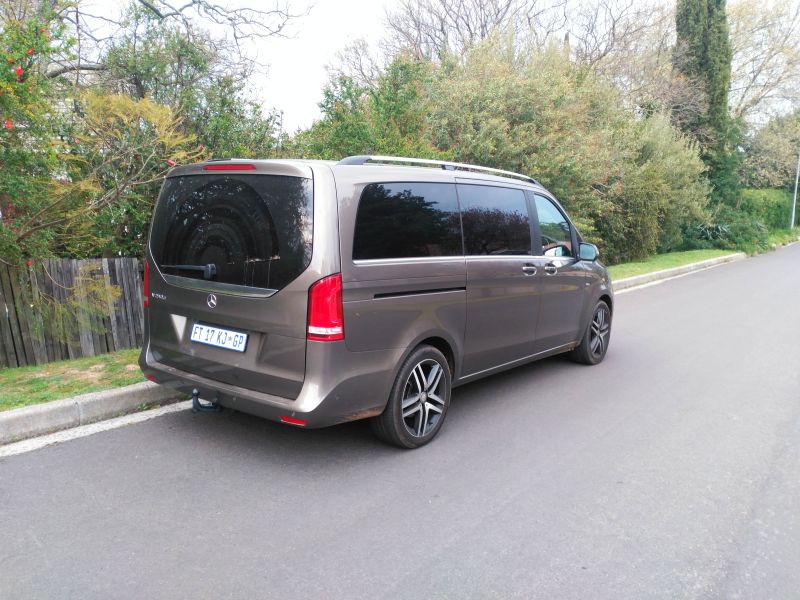 Back to my passengers of which the first lot included my cousin and her inquisitive kids. Within just a few blocks this choc-brown V250d was deemed to be “very cool” and its big cabin with equally brown leather was filled with ooh’s and ahh’s. 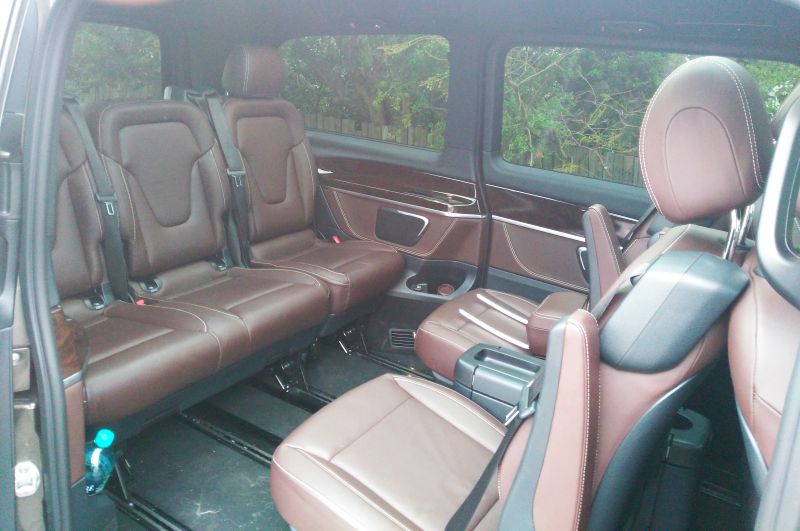 Not too long after that, the inevitable question fell: “How much?”

The list goes on and on, covering many safety items, luxuries, gadgets and quite a few novelties (for a van) like adaptive cruise control with collision warning, adjustable mood lighting, mini-fridge, lane-keeping assistance, and even selectable front voice amplification which pipes the driver and co-driver’s voices into the rear cabin! 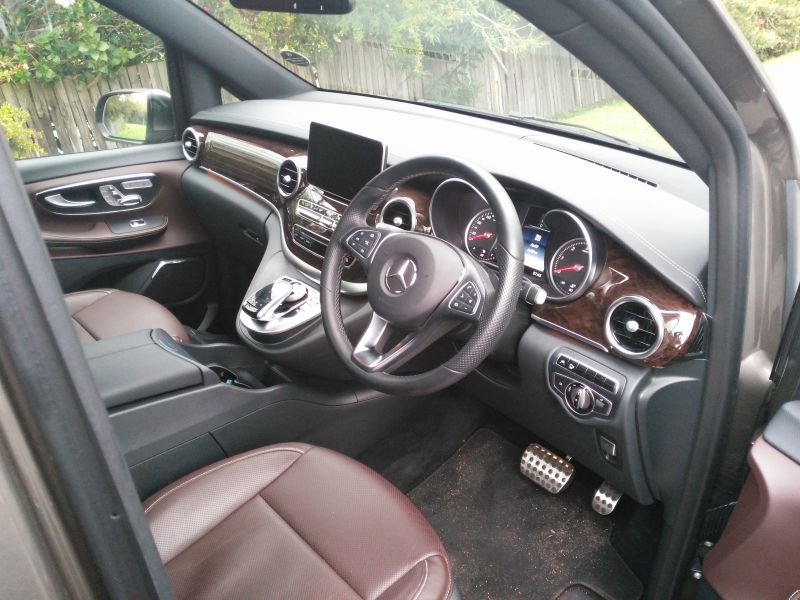 By the time I discovered this rather hair-raising amount, more V250d inhabitants had arrived in the shape of an old friend from Swakop and my folks from Windhoek. They wasted no time in giving this minivan a thorough seeing to. “That’s a lot of money but you get a lot of car and luxury!” was the unanimous verdict.

The next observation made by everyone (including the driver) was how quiet, comfy and manoeuvrable the Benz minibus is.

Despite some big wheels and low-profile tyres, this box on wheels rides and cushions beautifully while performing U-turns in surprisingly little space. 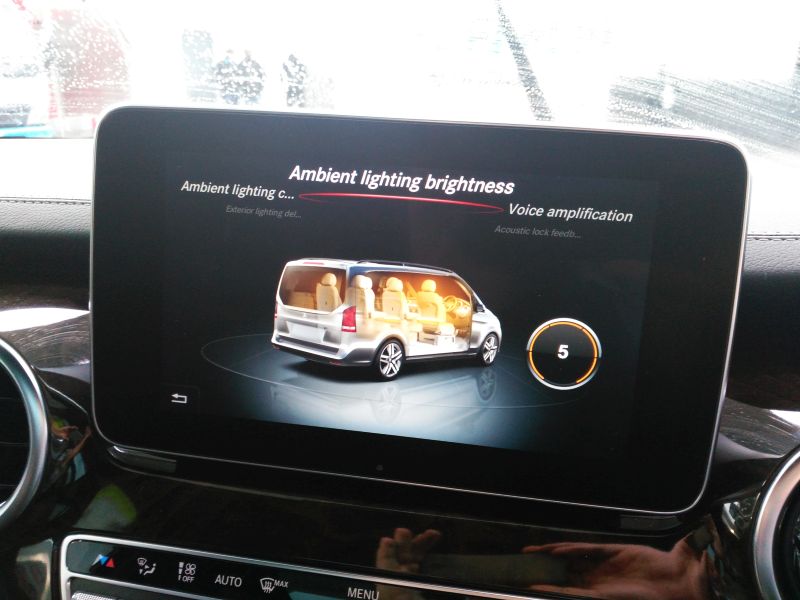 VIP shuttles, five-star hotels and their guests will love it!

A few things to keep in mind is the considerable length, height and weight; all of which will eventually wrap you over the knuckles if you do succumb to the V250d’s power and smooth controls. It corners and brakes well for a 3-ton brick but not-so-much when you’re used to a normal car.

While I’m busy dishing out criticism, one of our test car’s brake discs had a faint squeak to it, I found the wood veneer a smidgen too shiny and its front oddment space layout was a bit daft.

Also, one of this van’s rear seats had come loose and resisted numerous attempts to lock it back into its sliding rail. 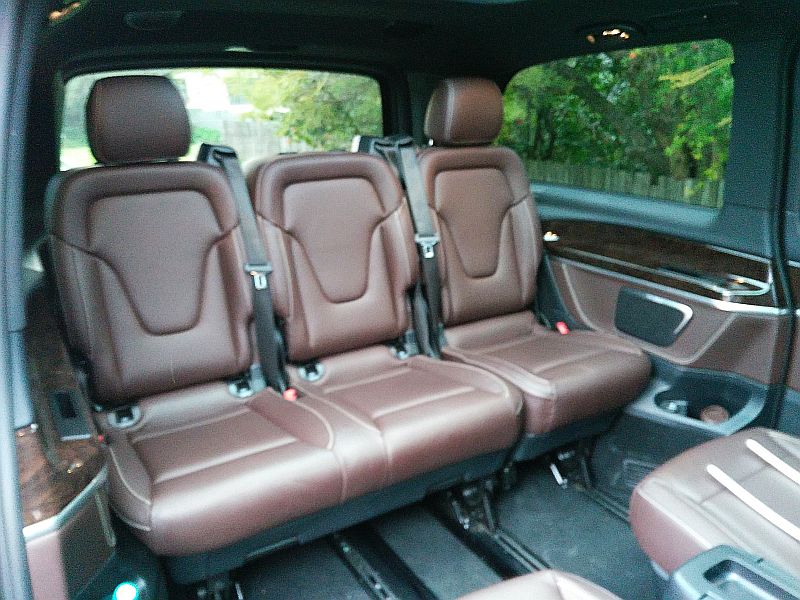 Having one wobbly chair in the car wasn’t a huge issue until I would have to brake sharply – at which point the occupant of said chair would rocket forward involuntarily. Admittedly, I often found great entertainment value in this flaw.

The two middle seats with their sliding and folding table were facing backwards and we learnt that – unlike in the VW Caravelle – these don’t rotate on their mountings.

In fact, to move any of the furniture around in this Benz, you need at least an extra set of hands and eyes. Rushing to the defence of this likable luxury limo, another set of passengers noted that you wouldn’t have to move it very often.

They also heaped praise on the 542L boot with its clever multi-purpose divider. 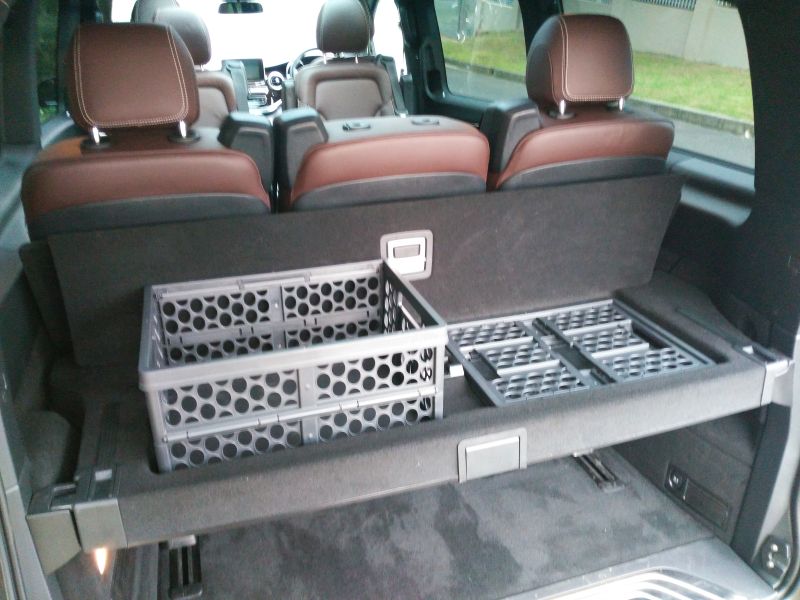 So the V250d was loved by all who climbed aboard but I found the (somewhat shiny) veneer wearing thin after a week of driving. None of my concerns were deal-breakers but if I had parted with 1.2 million N$, someone’s head would be in danger of rolling. To put it more clearly – some aspects of its quality were not quite on the level I expected.

Mercedes-Benz claims that a V250d should do 0-100km/h in exactly 9.1 seconds but we repeatedly measured around 11.3 at sea level.

Keep your foot nailed to the fire wall and this V-Class is supposed to reach 206km/h. Requiring even more of your bravery and patience is the claimed average Diesel use of 5.7L/100km; we averaged ten from the 75L tank. 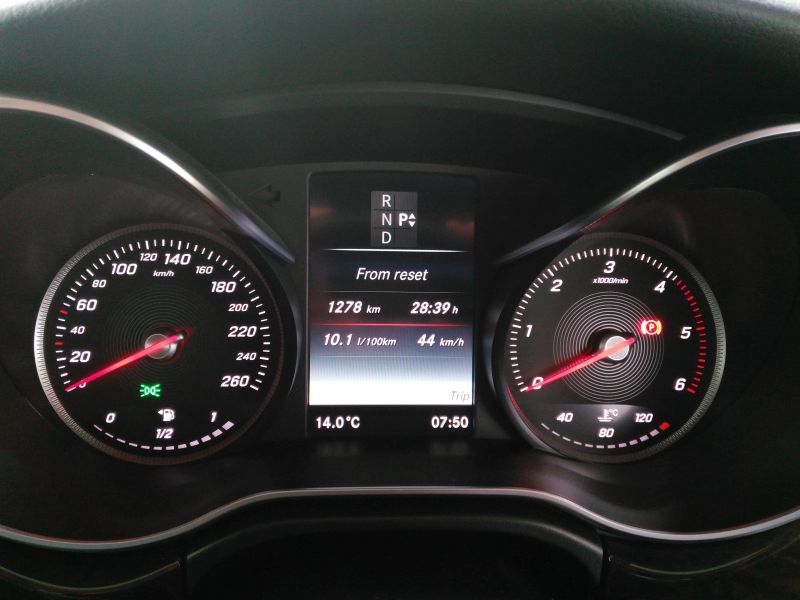 Mercedes-Benz will include a big warranty and service plan with the sale of each V-Class and I for one would probably make good use of it.

As a final note, those who don’t shuttle VIP’s around and are looking for a more affordable or hardy minibus may be better off with the Mercedes-Benz Vito / Tourer or one of its rivals.