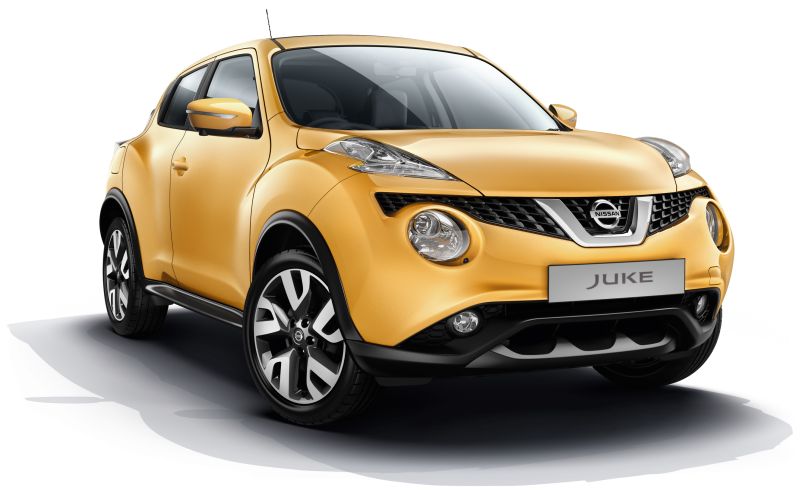 Frog, Prince or Juke? We take a good look at this unique Nissan.

Some think it looks foxy, others think it looks like a frog peering out of a marshy pond but love it or hate it, you cannot ignore the restyled Juke cross-over.

The Juke is one of Nissan’s top-selling and most popular lines in this country and for very good reasons – it is one of the most pleasant vehicles in its class and serves up a family-friendly combination of practical and comfortable with a good dollop of driving pleasure.

Although Nissan has stuck to the successful formula of “if it ain’t broke don’t fix it” by not fiddling too much with its looks inthe past, the latest Juke incarnation is a rather drastic step away from its unassuming and boxy looks which nevertheless pulled more than 500,000 buyers worldwide since its launch.

As if it’s bulbous frog-eyed DRL daylight running lights, revised front and rear ends, reshaped derriere and the bigger alloys are not eye catching enough, our test car was painted in screaming canary yellow. Enough for a young lady to pop her head out of her black BMW at the traffic lights and say with a smile: “That thing you are driving is the ugliest vehicle I have ever seen on the road…”

But so what, you don’t have to kiss this frog for it to turn into a rather likeable prince because the transformation happens as soon as you glide in behind the steering wheel. It is delightful to drive and the longer you drive the Juke the more you like it.

What really impressed me about the new vehicle was the willingness of its new-to-the-range turbo-fed 1.2-litre engine Nissan shoved under
the stubby bonnet of the new Acenta model.

This little engine kicks out 85kW of power and 190Nm of torque which is good for a top speed of 178km/h. That makes it zip quickly off the mark because all that power kicks in low down in the rev range.

However, the gear ratios of the six-speed box are widely spaced (clearly intended to translate into sip-sip fuel use) but it does mean quite a bit of soup spoon stirring with the left hand as well as energetic right foot exercise to keep up the engine revs, particularly when driving undulating stretches of black top, which tend to negate its frugal fuel claims.

This Juke handles as well as one would expect from that upright stance. The speed-sensitive electric power steering is light, fairly direct and pleasant on the highway or when squeezing into tight parking bays.

The suspension is on the taut side and the new look Juke now also rides on bigger takkies so with only the driver aboard it does lean towards being a tad jumpy along rougher patches (this improves with four aboard and a full load). Speaking of loads, the white coats at Nissan took heed of the customers complaining about lack of packing space in earlier models and have lowered the (space saver) spare wheel to increase the Juke’s luggage space from 251 litres to 354 litres.

This applies to all models, except the 4WD,which has to house a rear differential and multi-link rear suspension system. Nissan has not changed the furniture in the Juke’s living quarters dramatically… and wisely so as it is spacious enough, even for up to four biggies.

However, the entire range has received a specification upgrade and even the entry level Acenta model of the Juke has Bluetooth phone integration, cruise control with clever speed-limiting capabilities, auto Stop/Start technology and full climate control.

All models in the Nissan Juke range also feature vehicle dynamic control (VDC) and six airbags, key elements to this vehicle’s five-star Euro NCAP rating. Because of its new funky coolness, sportier looks and interior improvements the Nissan Juke moves up in status within the growing segment of zesty newcomers such as the Ford EcoSport, Peugeot’s 2008, Opel Mokka and Kia Soul.

However, this very kissable frog is not tailored for the conservative or introverted types because it will attract attention wherever it goes, particularly when dressed in a bright yellow party frock like ours was!

The models and prices are: