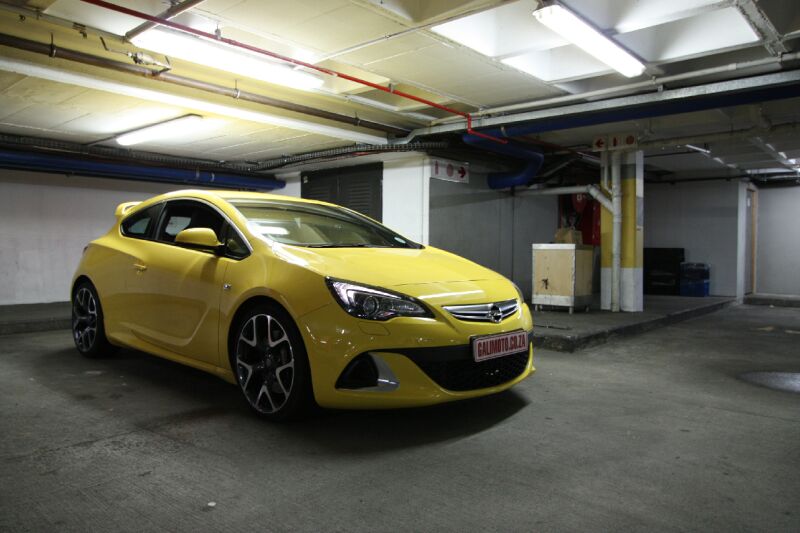 Despite what you may read in the media, don’t believe a word about performance cars disappearing soon. I always cite BMW’s 1M and Ford’s Focus RS which arrived in South Africa already sold out. The hot hatch segment’s never been bigger and just welcomed another contender: Opel’s Astra OPC.

Vast differences in size and power output have spawned the warm, hot and über-hatch categories, this Astra leaning towards the last one. Warm hatchbacks are nippy and fun, hot ones are fast and entertaining while the über-achievers are even faster and slightly scary. That certainly applies here.

With the exception of VW’s Golf, all the above are front-wheel-drive cars and most of them presented us with torque steer and messy launches – the tell-tale signs of an overpowered FWD car. Before I dive into its performance though, allow me to quickly run through the Astra OPC’s other attributes.

These striking 20-inch rims are wrapped in wafer-thin rubber and provide exactly the sort of ride you’d expect – rock hard. The OPC cabin receives lots of shiny trinkets, automatic and electronic gadgets, as well as a pair of ridiculously sporty seats. They’re wonderfully supportive though, as well as heated.

Astra’s centre console is a bit of a mess and it took us quite a while to locate all the buttons – speaking of which, two testers took over a minute to open the boot as it has no discernible handle, nor a button on the key or any sort of unlocking mechanism inside the vehicle. Press the logo on the boot lid to open it.

It’s fairly easy to get comfortable in the Astra OPC and the controls are just as stress-free. The pedals are lightly sprung and the steering’s not too hard for daily commuting. The instruments are delicate, the Infinity audio system is great and Opel even fitted a start/stop system to curb consumption (claimed average 8.1L/100km).

Surely one button would do?

We quickly found the FlexRide dynamic chassis Sport button which agitates the car’s responses, as well as an OPC button which makes it even more furious. Surely one button would do? No mind, press the OPC button and the dials turn red while the steering hardens, the suspension becomes solid and the engine rather snappy.

The 2-litre turbo-petrol four-cylinder growls a little louder, the exhausts hiss loudly at full throttle and occasionally give off faint pops on the overrun – although they do that in any mode. Something which also happened irrespective of mode was occasionally crunchy second and third gear changes.

The car feels much, much more powerful…

These teamed up with the OPC’s monster power to seriously hamper its acceleration results – our best figure was seven seconds to 100km/h; and just over 14 to 400m. The car feels much, much more powerful than those figures suggest but the simple fact is that it can’t get off the line cleanly.

Things improved drastically once on the move and presented with some twisty roads, an OPC corners flat with good steering feedback, minimal torque steer and fantastic Brembo brakes. Power out of a corner sensibly and the Hi-Per Strut front end and limited-slip diff offer incredible grip, dutifully following your chosen line.

Opel has done a sterling job of creating their take on an über-hatch. It’s unbelievably powerful and while it has the same low-speed traction problems as its rivals, it is just as enthralling to drive. If the jarring ride, savage power and low bodywork are too daunting, may I suggest a GTi or Opel’s own, excellent GTC?