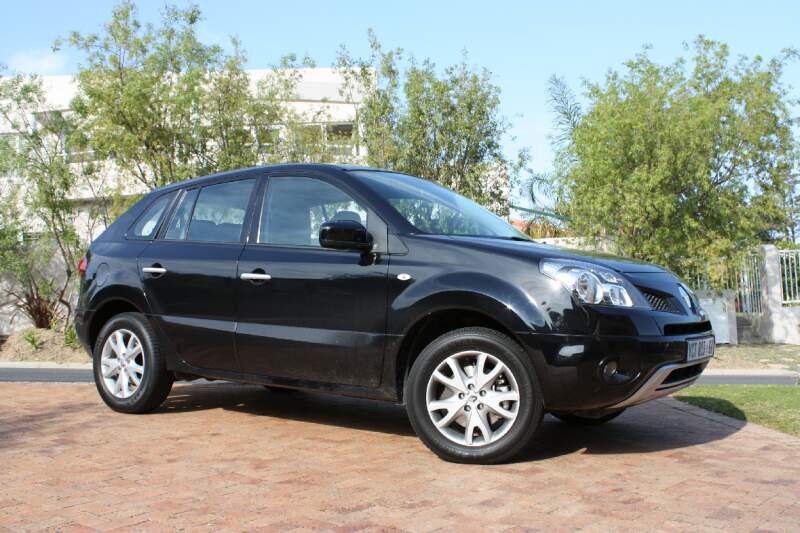 Renault’s latest television commercial will have us believe that people have been using their dependable French cars as adventurous off-roaders for quite some time, which makes the first four-wheel-drive Renault a kind of big deal.

The new Koleos pulls into the showrooms not to scare hardcore bundu bashers and bakkies, but rather to woo urbanites with a penchant for occasional outdoor escapades. Traditional SUV’s are still on the wrong end of negative comments in today’s ecological times because they’re usually heavy drinkers who never leave the comfort of a tarred road.

With this potential clientele in mind, Renault equipped the Koleos with decent ground clearance and switchable four-wheel-drive. Its bumpers and underside give the assurance that this soft-roader will manage to traverse bush roads and the odd mountain if need be.

However; Koleos finds itself in a challenging market segment which is fiercely defended by names like Toyota RAV4, Nissan X-Trail and Land-Rover Freelander. Its versatile interior, light steering and pedal feel mean that it will easily pull up a chair and wait with the others for eager new owners, like young families.

The styling of its bodywork isn’t exactly daring, and I simply couldn’t get used to its bulbous bottom. But the front and rear light clusters lend some freshness to its design, with big wheels and silver accents completing the “yes, you can take me down a dirt road” picture.

Renault’s latest toy will surely conquer more suburban roads, and completes this task with utter confidence. The suspension setup is slightly soft, but this means that Koleos will ignore potholes, speed bumps, and other nasties. It also dislikes fast cornering, but the upside is that Koleos makes a superbly comfortable family car.

Oh yes, and forget about drag races at the traffic lights. The 2.5 liter in-line 4 cylinder petrol engine gives you 126kw (171hp) and 226Nm to play with, but its performance remains on the acceptable side of motoring.

Even better (and more pleasurable) is the engine’s power delivery, which showcases that it belongs to the new clique of variable valve timing. And because it’s quite large for a four pot motor, you’ll find plenty of torque and pulling power in the depths of its revs. The Koleos happily potters around at low engine speeds and will gladly start accelerating in fifth or sixth gear at 1000rpm.

Put the handy gear lever back a few numbers and the Renault engine shows its other side; the one that likes higher revs and silky-smooth acceleration. The transition from low revolutions to screaming redline is exceptionally subtle, doesn’t sound half bad, and it feels like the engine can easily climb higher when it gets rescued by its 6500rpm limiter.

That still doesn’t make Koleos a sportcar, but it gives the word “sport” in sport utility vehicle a pleasant meaning. Should you not put foot too often, the Renault will even be frugal with its fuel and only use an average of 10 L of unleaded per 100km.

Another great attribute of the youngest Frenchy is its versatile interior where you can fold the seats to your heart’s content, hide plenty of groceries, or accommodate a few kids plus sports equipment. Fold a few seats flat and Dad can even go bananas in the local hardware shop’s wood department.

The rear door folds open in two parts (like a Range Rover) which means you have a place to sit when enjoying kleinboet’s first rugby match. The boot has also got an adjustable cover and under the floor you will locate a full-size spare wheel.

On the steering wheel column you shall also find controls for the sound system to switch between modes, the station or track, or alter the volume. These controls quickly found favour with me as the main sound system didn’t have a proper volume knob.

Safety is another big focus with the Koleos (or any new Renault, actually) so you’ll be pleased that the newby has been fitted with countless airbags, height-adjustable headlights, ABS brakes, as well as traction and stability control. As mentioned previously, the steering and pedals are very easy to operate, and the brakes completed an emergency stop perfectly.

Is the Renault Koleos a good four-by-four? Uhh, I’m not sure, but it’s very surefooted and comfortable on dirt roads. Is it just another small SUV? Yes, but it gives you another (good) alternative if you’re in the market for such a vehicle. Whip N$320 000 out of your pocket and Renault will even give you a 3 year 100 000km warranty and 5 year 60 000km service plan.