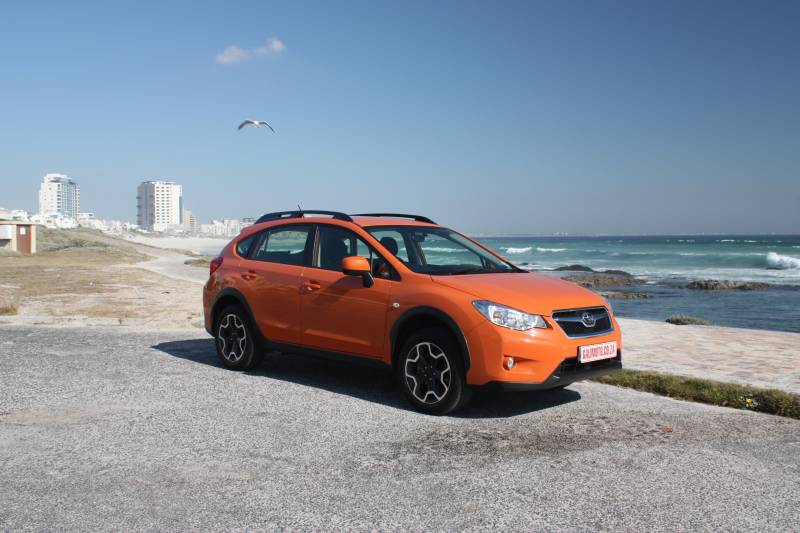 Last weekend I was invited to go camping for a bachelor’s party, two activities I thoroughly despise. Not wanting to be a spoilsport though, I accepted the double challenge and even offered free rides to some fellow attendees in my test car of the moment, Subaru’s XV crossover SUV.

A few foul-mouthed group chats later, everything was arranged and I loaded the prerequisite sleeping gear, braai utensils and half a bottle store into my very orange car. What immediately became apparent was that the XV’s 310L boot was already filled to half its capacity by just my stuff.

Three cheerful dudes later, the Subaru could take no more so quite a bit of luggage and more expletives were exchanged with another vehicle. While transferring sex toys, loudspeakers and yet more booze to the other car, we did note that the Scooby hadn’t sunk to its knees yet – it was just out of space.

Four fully-grown men and a cooler box, mostly dressed in orange, found sufficient room and comfort on the XV’s furniture for a 200km trip to a riverside campsite. Not before inspecting the car a little closer though, its garish paint hiding a mix of bulky angles, smooth creases and black plastic cladding.

One or two middle-management types crinkled their nose at the Subaru’s simple interior but were eventually pacified when they learnt that the spartan layout and budget materials usually spell hardiness and longevity. It’s nothing special but it feels sturdy – kinda like an old Toyota.

Next on the agenda for open discussion was the CVT (continually variable transmission) with its unfamiliar, scooter-like behavior. Although you’ll find a set of shift paddles behind the steering wheel, these mimic certain gear ratios with very little success; it’s best you leave it in the one-gear auto mode.

Claimed average fuel consumption is 7.9L/100km from the 60L tank and average emissions should be around 187g CO2/km. Admittedly we were far above the XV’s unladen mass of 1,420kg but everyone felt that most of those numbers were a bit optimistic; especially the torque.

Someone rushed to the engine’s defense by stating that we’ve been spoilt by turbocharged cars, which would explain why the combination of laid-back gearbox and high-rev torque was struggling to gain significant momentum on perfectly flat roads. Uphill sections were even more unpleasant.

As a result of this, we didn’t make the return trip in one go and had to stop on the way back for extra fuel. Most driving was done at the posted speed limit or at a very leisurely pace over dirt and rocky roads. It was here that the Subaru XV clawed back some positive feedback.

Power is sent to all four wheels via an Active Torque Split All-Wheel-Drive System, with a bias towards the front two in normal conditions. We never encountered seriously rough conditions but the car’s clever drive train and 220mm ground clearance got a full quartet of nodding heads.

Another trait which impressed almost every occupant was the XV’s pliant suspension. McPherson struts at the front and double wishbones out back do a superb job of keeping the cabin relatively free from unnecessary discomfort over corrugated dirt roads or farm tracks made entirely of loose cobble stones.

Shortly after we arrived, my memory goes a bit hazy but I’m sure Subaru will be pleased to learn that after the festivities, we found the car exactly where I had parked it. Driving back home was a quieter affair, the soft music only being interrupted by occasional cracks of an energy drink cap.

Easy listening tunes were streaming from the six-speaker radio/CD unit with Bluetooth, USB and Aux inputs. It’s just as simple as the trip computer and can also be operated via buttons on the adjustable steering wheel. I also employed the cruise control for quite some time.

Unless you’re a serial commuter, go for the manual version to get the most out of this little SUV. The jump up in price to the top model is mostly due to more luxurious specifications, but it is only available in automatic. Not a bad thing when you’re nursing a babalas and an epic shirt tan.