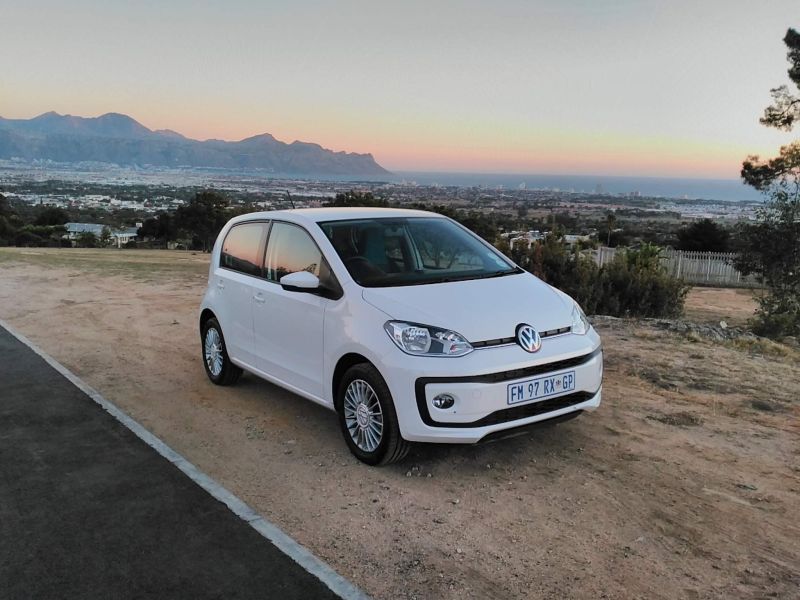 That’s right, a few years ago we attended the South African launch of Volkswagen’s little city car, the up! Arriving on African soil later than overseas, the factory decided to only bring in two-door models with a 1-litre petrol engine in order to (and I quote) “not cannibalize Polo Vivo sales”.

What you’re looking at now is the four-door model of that car and to make matters worse, the two-door was scratched from local price lists. In their defense, quite a few years have passed since then; and Volkswagen’s decision was influenced by private and fleet customer suggestions.

“You can’t reach the seat belts!” moans a friend about a rented two-door up!. “Of course it’s not easy to reach the back,” narrates my aunt from Swakopmund. “But my kids are out of the house so I don’t have a use for rear doors. I love my little two-door up!” she concludes with a cheeky giggle.

After spending a week with this white press demonstrator, I hasten to add that the extra two openings do not add any extra length. This car is still the same size as before and there isn’t a noticeable difference in rear leg- or head-room. Entry and exit possibilities, yes. Heaps of additional space? Negative.

Still, the little Volkswagen grew beyond its intended market of singles, empty-nesters and other childless motorists. Beyond its city-friendly size, it fits our burgeoning entry-level market and has slightly superior quality as well as more favourable consumption when compared to a Vivo.

So what’s it like to drive? The three-cylinder (non-turbo) petrol engine puts out 55kW or 95Nm, which means that it’s one of the slowest modern automobiles on the road. 0-100 takes 13.5 seconds. It struggles with steep inclines, heavy loads and overtaking – also because its five gear ratios are too widely-spaced.

The manual cogs and all other driving controls are easy to operate but the lack of oomph means that you oscillate between full throttle and vigorous gear stirring. The upside of all this – especially in normal city traffic – is sufficient torque and hilariously low fuel consumption. VW claims 4.6L/100km from the 35L tank.

Just ignore the moronic gear change suggestions, which are a pre-programmed algorithm that has nothing to do with real-world driving. Another perceived negative was the 251L boot which took a few shopping bags with ease and is par for the course in this segment.

The up! has a second (hidden) boot floor though, expanding cargo room to more commendable levels. You can also fold the rear seat backs in a 60/40 split ratio to get up to 959L or space to transport many, many things of the bulky variety. And best of all, the up! also hides a proper spare wheel and tool kit.

Depending on the chosen model, most modern conveniences are included in the price. Crucially, every up! comes with a decent set of safety features and driver aids. There are a few options to jazz up your new car and we highly recommend the Driver Pack with cruise control, rear park sensors and a brilliant little on-board computer.

A basic radio is optional on the entry-level “Take up” and has received vital updates which include USB, Bluetooth and a funky little colour screen with multi-function buttons. Four extra speaker cost just a grand or you could splash out on the “beats” model to get these and a few other toys included in the price.

For the full spec and price list, consult your nearest Volkswagen dealer or visit www.vw.co.za. VW doesn’t include a service or maintenance plan with the up! but my aunt will attest to the fact that there are people who do very little mileage and have no use for such extravagances.

It’s part of what keeps the up!’s prices relatively low and offers potential owners a tailor-made car to their exact requirements. At the time of composing this review, customers also had the choice of a fairly vibrant paint palette, different roof colours and some interior choices, too. But only four doors…