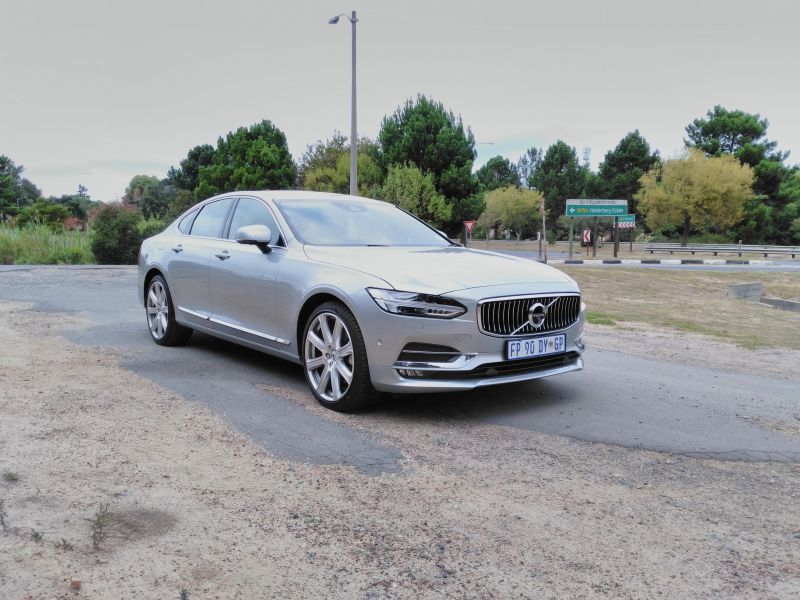 Imposing. That’s the word a neighbour finally settled on after an extensive inspection of our latest test car. “It’s a big car but they’ve hidden the sedan’s bulk quite well.” Other words that pop up during our lengthy look at this car are “graceful”, “stylish” and “modern”. This is the new Volvo flagship sedan, the S90.

To quickly explain its birth, Volvo makes use of modular vehicle platforms called SPA (scalable product architecture) which allows them to build many cars on one basis. For the local 90-Series models, that already includes the XC90 SUV and this S90 sedan. Overseas, they also make a V90 estate and C90 coupé.

Modern marvel. More one-size-fits-all goodies include just two base engines in various states of highly advanced tune. Our D5 test car was a turbo-diesel with “PowerPulse” trickery to extract 173kW and 480Nm from just 2 liters of displacement. As a bonus of being related to the XC90 softroader, this car also has all-wheel-drive.

AWD. Although it may not be a proper 4×4 setup, can you think of any other (local) sedans with four driven wheels? Gold stars (and rims) to anyone who said Subaru. This S90 differentiates itself from the Japs with a hefty price but equally hefty specification levels, high-tech safety kit and perceived luxury.

Perception. Some peers have questioned the quality of materials used but I couldn’t fault them. Others bemoaned the finicky tablet-style infotainment system but I found it no more daunting than the systems in its direct rivals. My only criticism is that one sometimes needs a steady hand to hit buttons; especially over bumpy roads.

However. The vertical and very sizable screen does wonders to unclutter the cabin and stylish dashboard, helped by fully digital instrumentation with many viewing options. The cabin is near identical to that of an XC90 which brings further opulence with it. That wide and tall central tunnel is very Range Rover.

Dimension. Speaking of which, the S90 fits somewhere between a 7 and 5 Series; or S and E-Class. That also goes for its prices. Volvo’s packages and options are, as always, competitively stacked and priced. Our test car had a multi-mode air suspension which delivered Jaguar-like ride perfection, even with the 20-inch wheels fitted here.

Sure. There’s a sense of disconnection from the road but I find that perfect for a luxury sedan. Sport mode agitates everything and only made me wonder who needs such choppy nonsense in a Diesel limousine? The default Comfort mode is superb but can produce a rodeo effect over successive undulations; yet never at a nasty level.

Other impressive stuff includes the D5 engine’s excellent power delivery and even more fantastic 8-speed automatic gearbox. Unlike some dual-clutch competitors, this combination never left me hanging in a turbo hole or torque gap. It’s a wonderful cruiser, effortless commuter and returned an average of 8.2L/100km.

Autonomy. A headline act for this car is its semi-autonomous driving ability; which I tested a lot. Adaptive cruise control and lane recognition means that this S90 will drive itself for a few seconds on smooth, well-marked highways. Throw in sharp bends or sudden road irregularities and it goes belly up – a gimmick that’s still in its infancy.

Convenience. Other, more obedient luxuries include a highly competent self-parking system, keyless entry and motion-sensitive boot lid, superbly comfortable seats and breathtaking Bowers & Wilkins sound system. It might be an option in some models but I urge – nay, implore – you to splash out on this truly astounding aural pleasure.

Prices. Want to park one of these sleek giants in your garage? Prices range from 700-odd up to almost 900 grand but that encompasses 255 to 320 horsepower petrols and 400 to 480Nm diesels. BMW and Mercedes offer equivalents as a 5-Series or E-Class but with slightly inferior specifications.

Every Volvo S90 is sold with a five-year 100,000km warranty and maintenance plan.