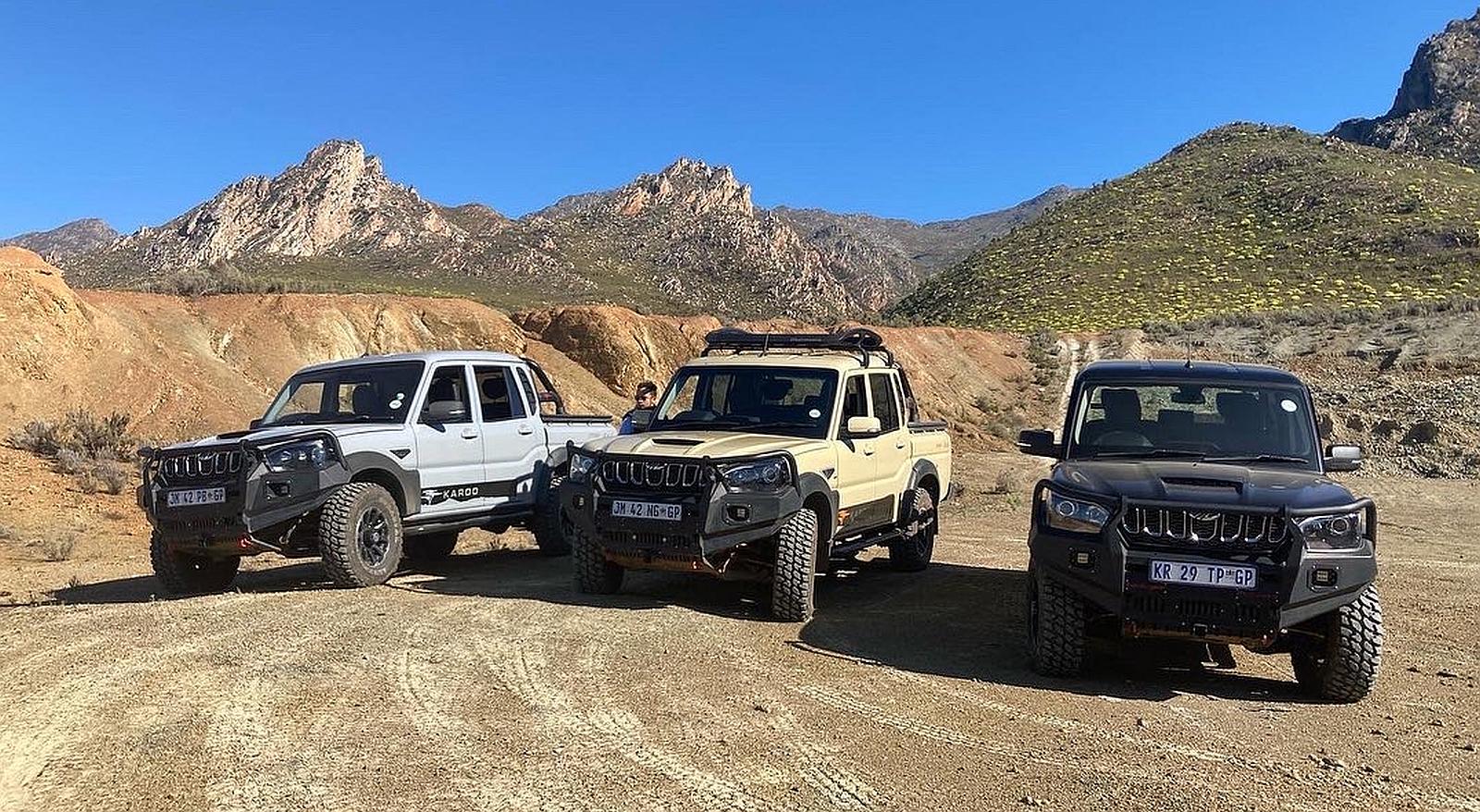 We recently attended a day of off-roading with the new Mahindra Karoo Dusk, Dawn, and Storm editions. Taking it through the steep gravel angles and soft sands of the Klipbokkop farm near Worcester, we had to share our impressions about this newcomer.

Since 1996, Mahindra has been continuously updating its product range and proven reliability to such an extent that its bakkies are now trusted in both rural and urban environments. Even more promising is that this Indian manufacturer established its first Southern-African assembly plant in 2018 (Kwazulu Natal). This manufacturer recently sold its ten-thousandth Pik Up to be manufactured in Durban.

At the end of 2021, we had the privilege of testing the special-edition Mahindra S11 Pik Up Karoo. True to its name, we ventured into the semi-arid Karoo region during December and found this to be a trustworthy companion at a fraction of the normal double cab prices. Even with rising prices, the top spec S11 4×4 Karoo (automatic) edition is R484 999. At this price point, most competitors are only able to offer a single cab.

Recently the manufacturer announced its Twin Peak logo, which is set to take the brand towards a more luxurious design ideology; and while the Karoo Pik Up was only said to be a special edition, it became so popular, that Mahindra extended the range even further to have a further three Pik-Ups adorned with a “Karoo” badge. The Karoo Dusk, Karoo Dawn, and the Karoo Storm offer added features to the already established Karoo edition.

With regards to aesthetics, each of these Karoo models features new decals, Karoo branded interior carpets, a nudge bar and a load bin-mounted sports bar. Inside these Pik-Ups you will find upgraded leather seats (previously cloth), and an upgraded and fully connected HD 9” infotainment system (previously 7”).

Fitted to perfect off-road driving, each of these derivatives features off-road suspension, off-road tyres and 4×4 rims. These models also have front and rear steel bumpers, as well as LED driving lights attached to the front bumper.

To add to this, all load bins are also rubberized.

Each model then is perfectly manufactured to tame the road less travelled.

The Karoo Dusk model features a pitch-dark night colour, reminiscent of the deserted Karoo landscape at night (or the cityscape during Eskom’s load-shedding, for that matter). The Dusk model uses dark black body paint with blue Karoo decals. This model furthermore features a sports bar and roller shutter door.

The Karoo Dawn is a contrast to the dark colour of the Dusk and is finished in a sandy beige. It is reminiscent to the early morning landscapes of the Karoo. It also camouflages easily into the brown haziness of sand dunes as we found…

Alternative to the light blue decals of the Dusk, the Dawn features rich orange decals. This model will feature similar specifications to the Dawn, except for the roller shutter door and the long sports bar. Rather, it features a heavy-duty roof rack and flush-mounted tonneau covers as standard.

Lastly, the Karoo Storm was our vehicle of choice during this exciting experience. Reminiscent of the dark, albeit rare Karoo rainstorms, the Storm edition is finished in a light blue hue, accentuated by black-and-grey Karoo decals.

This model features an approach and departure bumper, a rubberized load bay, tonneau cover, and special edition off-road rims and tyres. It also has a leather interior.

How is it to drive?

While not much on-road driving was completed during our test (more on this during a future test), we were delighted with the Karoo Pik-Ups abilities on the gravel and sandy surfaces.

While these Karoo editions can carry 995kg and tow 2.5 ton, they are also capable of dealing with an approach angle of 34 degrees, break-over of 18 degrees and a departure angle of 15 degrees.

This was truly put to the test when we took on a steep 28-degree incline and descent. In low range, and with the revolutions at a stable 2,000rpm, the Karoo made easy work of this. Similarly, the Pik Up was able to descend with ease on the other end.

In the sand, and with the rugged tyres decreased to a pressure of 1 bar, the Pik Up simply glided through the uneven and thick sandy terrain in second gear (low range).

While the initial S11 Karoo edition served us well during the December holidays, these new Karoo editions surprised us even more when it came to their off road capabilities!

1 thought on “Time to hit the road less traveled with the Mahindra Karoo Dusk, Dawn, and Storm”