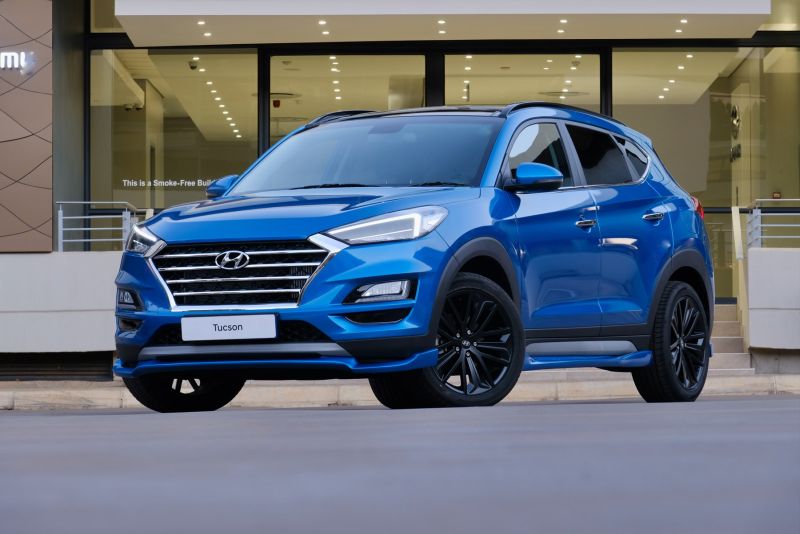 Hyundai South Africa appears to be a company with its finger on the pulse, reacting to market demands with the sort of speed and innovation we last saw in the late 80’s. While most of its rivals are hamstringed by dreary corporate rules these days, Hyundai still gets to play a little and produce bespoke cars like this Tucson Sport.

Actually, I need to do a bit of explaining here. It’s not brand-new because they already sold this model with the previous (pre-facelift) version of the current Tucson. Also, it’s not a proper N-model from the factory but rather a dressed-up and beefed-up local effort which the Korean mother-ship may or may not be aware of…

Pardon me for quickly following a different tangent because the cheerful S.A. execs always share motorsport and international news, market conditions and future products at their launches. This time they previewed a limited-edition black and white Creta as well as another local-is-lekker idea, the Grand i10 Cargo.

This tiny hatchback with good specs and loads of cargo space takes the reigns from the now-defunct Chevy Spark or Polo Vivo cargo-versions and only has the Nissan NP200 bakkie to compete with. It does this with superior specifications and a better price tag while offering car features as a registered and tax-deductible LCV (light commercial vehicle).

How brilliant is that?

Back to the Tucson Sport which – in a nutshell – is a regular Tucson with a fully-imported and colour-coded body kit, custom-designed alloy wheels, mild chip-tuning (for more performance), more aggressive throttle sensor, as well as a custom exhaust system with four large chrome tips. All this costs an additional R56,000.

Whereas the previous Sport model was based only on the 1.6 turbo-petrol model, this fresher version can be had as a 1.6 TGDi (ditto) Sport DCT or 2.0R (turbo-diesel) Sport Auto. Both iterations are based on the top-spec “Elite” trim with leather interior, climate control, satnav infotainment and plenty of driver aids.

Power outputs are identical at 150kW (204hp) with the 1.6 turbo-petrol delivering up to 300Nm of torque and the 2.0 turbo-diesel topping that with a colossal 460Nm. The petrol model uses a seven-speed dual-clutch automatic gearbox while the diesel utilises a traditional eight-speed auto’box.

All Tucsons are front-wheel drive only.

Why? Because – as always – Hyundai S.A. did their homework and saw that nobody really wanted an all-wheel drive version. All we want, apparently, is a stylish and efficient SUV. And while the author still thinks sporty wannabe 4×4’s are a fad, plainly the buying power in southern Africa doesn’t.

I’ll let you form your own opinion on the looks of this latest Tucson Sport, it certainly demands to be viewed “in the flesh” to drink in the many details of its styling. Depending on where it’s manufactured (Korea or Czech Republic) you may find subtle paint or trim differences; and the indicator stalk swapping sides.

All Tucsons are available in seven exterior colours and only black as an interior hue. Black like the bottomless sea at night. Black like the devil’s soul and as black as those poor alloy wheels. But I digress. Way more important is that all vehicles come with a 7-year/200,000km warranty and roadside assistance.

At the recent launch in Cape Town, Hyundai execs sent us through the Cape’s congested highways and byways to Killarney Raceway for some hot laps in the new ‘Sports. That seemed overly confident at first but the car’s extremely eager nature already became apparent on the way to the track. They tear at their leashes, these two.

Out on the track that means fairly instant performance but most drivers noted that it takes a delicate right foot to handle Tucson Sport in everyday traffic. That uprated throttle sensor makes the car incredibly twitchy at low speeds and spinning wheels were a common (but often unwanted) occurrence. Especially in the torquey diesel.

Another gripe among some of my peers was the boomy exhaust note of the turbo-petrol model, although others revelled in the subdued Vrr-Pha exhaust burble on gear shift. We also observed a rather nervous steering feel, especially around the centre at highway speeds, but sporting drivers may delight in this sense of urgency.

The suspension handled our race track excursions admirably while teetering on the edgy of uncomfortable around suburban streets. It’s certainly sporty and perfectly acceptable by today’s standards. Tucson’s brakes are also superb and withstood a surprising amount of punishment on the track.

So there you have it. The new Hyundai Tucson Sport is a custom-made local jobby with aggro styling, jumpy drive train, all wrapped in an accomplished package at a decent price. The 1.6 turbo-petrol costs R654,900 and the 2.0 turbo-diesel will set you back R664,900 in South Africa.