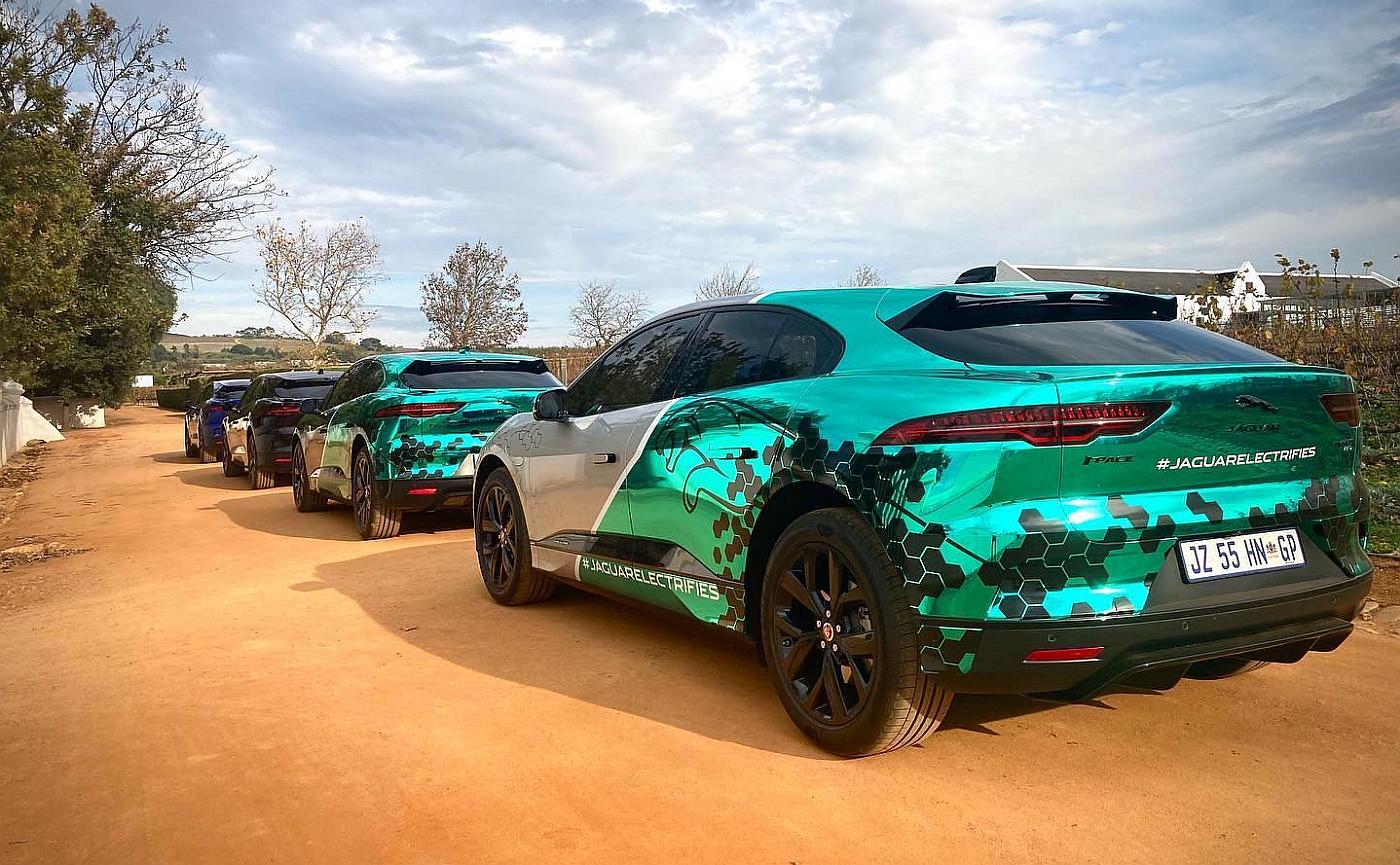 “Electric is the future”. This is becoming quite a prominent saying among the global motoring community. Yet, some might believe that higher income countries (HICs) will adapt to this technology much faster than middle- and lower income countries, such as Southern African regions. While this might be true, the electric vehicle (EV) movement is also being fast-tracked in Southern Africa, with Jaguar being one of the main motivating car manufacturers, as they aim for a 2025 switch.

We recently took on a two day excursion with the brand, traversing some 210km within condensed urban spaces, as well as the open tarmac and gravel roads of the Boland to see and learn more about the electric range, and what the future might hold.

Travelling from Tokai (Cape Town) to Franschoek, Babylonstoren, Hout Bay, and back to Tokai, each of the media I-pace models were given to us with over 400km of range. Fully charged, these cars can cover distances of 470km, depending on how strenuous the car is driven. After  two days, and 210km of mixed surfaces and different traffic conditions, we stopped the I-Pace back in Tokay with 152km left on the range. This, without a single charge during our trip.

Is the I-Pace feasible as a daily commuter?

As a daily commuter, an electric vehicle such as the I-Pace makes absolute sense. Range anxiety, as we experienced during this trip, is only limited to longer excursions or if the car was not charged appropriately.

Generally, EVs such as the I-Pace will be able to easily commute from one’s home to work and back without any concern about the range. Should this commute include slow-moving or even standing traffic, the regenerative braking can be set to the maximum, resulting in the battery harvesting more electricity as you commute. The benefit of this is that you regenerate electricity for free. Additionally, the brake pedal hardly has to be pressed as the car will stop itself at slower speeds. This then saves your left foot more effort as well as preserve the brakes itself.

With a 90kw battery, a normal house hold three-point plug will recharge the battery at a rate of 2.4kW. A daily work commute may therefore mean that the car can be recharged during the evenings (8-11 hours). However, should one use more range daily, or not charge the car continuously, it may take more than 40 hours to recharge.

Luckily there is a more efficient solution for this. The instillation of a “Wallbox” will result in the recharge rate improving to 7.4 or even 22kW. The result is that the car can be recharged from nearly empty to 80% full in 8 hours; perfect for a night’s sleep. The last 20% of recharge time will usually take longer, to prolong the lifetime of the battery. Should it be charged to 100% from empty, it will take 12.7 hours.

To our own amazement, these wall boxes were relatively inexpensive and can be purchased online, even at distributors such as Takelot.

Similarly, maintenance costs will also be low as no oil is needed for the engine, while brakes and other components are stressed to the minimum.

What about longer excursions?

The use of EVs can easily be compared to that of cellphones. Similar to the paradigm shift humans took when the cellphone first arrived, so too will the arrival of EVs require a mind shift.

While a trip from Johannesburg to Cape Town is certainly achievable within a space of two days, proper planning will need to be put in place. With coffee breaks in between and a pre-planned overnight booking (with electric facilities nearby), such a trip will be more than achievable, as has been done before.

Luckily, Jaguar is working closely with Grid Cars, which implements and manages most of the EV infrastructure in the country. A live map on chargestations.co.za or

https://www.jaguar.co.za/electrification/jaguar-powerway.html will show where these public charging stations are positioned.

Currently, the fastest chargers on the grid are 60kw/h, capable of fully recharging (80%) an I-Pace from barely any range left, in 90 minutes. However, the current grid is also ready to adopt 100kW chargers, which will fully recharge an I-Pace in 60 minutes.

In contrast to internal combustion engine vehicles, the weight of the car does not play a substantial role in range consumption. Rather, aerodynamics will play a much larger role. Luckily, the I-Pace has been designed to easily ‘cut’ through the air.

The positives outweigh the negatives

In contrast to internal combustion vehicles, the positive aspects outweighs the negatives considerably. The first hereof is price and recharging, whilst the car itself releases no carbon dioxide. Maintenance of these vehicles are also minimal, while the battery within the I-Pace is said to still have 70% of its capacity left after 8-years of usage. Batteries will can also be recycled and replaced by new batteries, when it eventually runs out.

Driving an I-Pace or any EV for that matter also holds the best of both worlds as it is a silent and very relaxing environment. Yet, when needed, the instant torque of EVs will propel the car forward without any hesitation. This, fortunately, will only be realised once one experiences it for themselves (talking from experience).

Lastly, we also found that the handling of the I-Pace is remarkably good, compared to other internal combustion SUVs. This is largely thanks to all sorts of electronic and suspension systems, but also the fact that the centre of gravity has been lowered due to the location of the batteries at floor of the vehicle.

Thanks to this, the I-Pace is able to seamlessly glide over the rough and patchy Boland roads as well as fairly ‘potholed’ gravel roads.

The I-Pace then is the perfect daily commuter as well as the ideal solution for leisure driving. Yet, with 294kW and 696Nm of instant torque, the I-Pace will certainly make you smile.

Jaguar has its global EV future firmly set on the date of 2025 and after experiencing the I-Pace yet again, I for one have made up my mind.

The electric future is exciting.