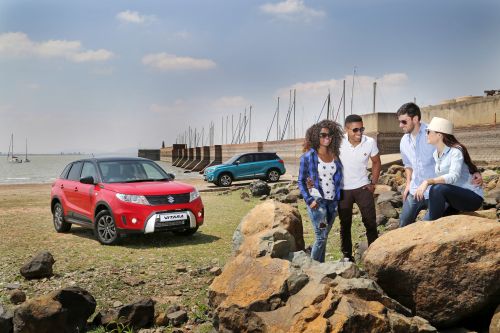 Cars can be so boring. White and silver boxes stuck in a slow and endless march to work, seas of grey metal in a dark multi-story office car park with the odd red or yellow specimen parked under a sign proclaiming “Reserved for Marketing”. Suzuki certainly recognized this with the launch of their brand-new Vitara.

Although the Vitara isn’t the first car to offer refreshing looks and colours – it competes with the Nissan Juke, Opel Mokka, Renault Captur and Citroën Cactus – the original Vitara from 1988 could claim that it was one of the first compact SUV’s in the market. Long before we all realized that we needed a compact SUV.

Suzuki may not be at the cutting edge of innovation but they definitely know how to read and respond to their customer base. With the bulk buying power in southern Africa looking for wheels in the lower *cough* cheaper segments, Suzuki released no less than seven affordable new models in the last 18 months.

Added to that, their footprint has grown to an impressive 42 dealers (including two in Namibia) and the happy crowd at Suzuki Auto South Africa report that there’s more growth on the way; despite tough market conditions. Our compact SUV market is also on an upwards swing, more so than its full SUV counterpart.

So much for the reasons why the clever Japanese decided to bring the new Vitara into our midst. Its original incarnation was sold locally from 1994 to 1998 and although they only shifted 1,103 units in that time, the occasional sighting proves how hardy and well-loved the first-generation model was.

At this new Vitara’s recent launch, we were also assured that this car does not replace the bigger, slightly ageing but robust Grand Vitara. The newcomer is related to their SX4 crossover model but shows marked differences in size which include a 375L boot and 185mm of ground clearance.

Borrowing styling cues from its ancestor, Vitara has bonnet and fender bulges as well as other small details which give a nod to the original. Its modern proportions even hint at a luxury British SUV. The rear end is somewhat reminiscent of an SX4 and the drive train could be accused of the same…

A 1.6L four cylinder petrol engine offers up to 86kW or 151Nm through a five-speed manual or six-speed auto shifter, delivered to either the front wheels or all four wheels (AllGrip), depending on the model chosen. Average consumption claim is a laudable 5.8L/100km and CO2 emissions around 140g/km.

Its best defense against boredom is an eight-strong colour palette of which five are two-tone combinations that marketing types dream of. You can also make merry with the paint inside the new Vitara to liven up its functional cockpit. At the launch we found the seats, driving position and ride to be exceptionally good.

Performance isn’t on turbo rival standards but then neither is maintenance or longevity. I would describe its power as “adequate” while space and comfort were superb on our launch route; which included 80% dirt roads. I also noted that the new Vitara is fitted with Continental rubber and a temporary spare wheel.

Prices start at N$239,900 for the base model and you’ll pay 30 or 60 grand extra for fancier and automatic versions. AllGrip derivatives come in at N$291,900 or N$319,900 and all prices include a 4-year / 60,000km service plan. More importantly though, the Vitara undoubtedly retains its ancestor’s cheerful demeanor.

And in the right colour combo, it’s certainly not boring.