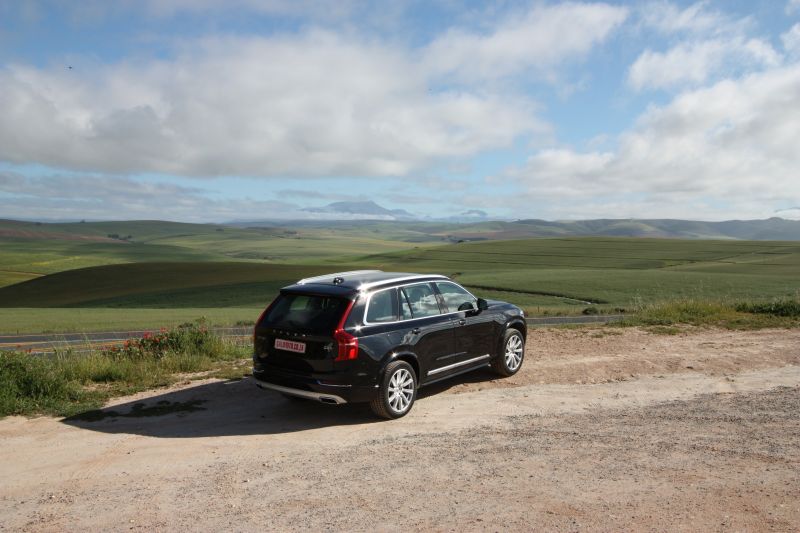 I’ve been so looking forward to testing the latest offering from Volvo. There’s been massive hype around the launch and I was privileged enough to get an early insight into this rather impressive SUV during August of this year, but it’s always even better to be able to poke around, fiddle with new knobs and dials and really get to grips with a new vehicle during a test week.

So it was with great anticipation that I took delivery of an Onyx Black XC90 with a beautiful, light Blonde on Blonde interior finish last week. Initial impressions did not fail to impress either! The huge 7-seater SUV lolled about in my driveway and instantly began to attract the notice of several curious onlookers. It didn’t stand for long as I was itching to get behind the wheel and take her out for a ride.

My initial impressions were that the ride was harder than I expected. For some reason, the vehicle comes across as so luxurious that you expect it to drive and feel more like a Range Rover with spongy suspension but this is not the case. The addition of Nappa leather as an N$11,000 option on our test vehicle certainly aided the impression of luxury and I must admit, it’s beautiful but I’d advise against this softer leather if as, most people most likely will be, you’re  looking to stock your XC90 with kids. Then you’d also want a more durable leather and interior carpeting colour too as Blond on Blond is not going to hold up to rough handling.

People’s reactions to the XC90 were largely positive. I parked the car in Franschoek main road for 10 minutes, when I came out, it had garnered a crowd of curious family-orientated onlookers who were merrily peering through windows and arguing about the merits of the new look XC90. It’s certainly eye-catching and definitely holds appeal for those with families looking for a big, safe, yet economical SUV. The vehicle is unmistakably eye-catching, from its new Thor’s hammer shaped running lights to the new enlarged Volvo ironmark on the massive front grill. The lines are stylish and add flair too. And there’s the space. By far the most comments were on centred on the spaciousness of the XC90 even in the very back (fold-back) row of seats.

Even kids loved it! One eager youngster was quick to point out not just the space at the back, but the additional climate controls for back-seat passengers and was fascinated by the funky digital graphics, and the trendy tablet styled multimedia unit is a huge hit with both kids and adults and incredibly intuitive to use, especially for those with previous tablet experience. Adults oohed and aahed over the heated front seats (N$3,500) and 360 degree Camera system (N$11,600), both of which were classy optional extras.

There were a few niggles that I found, all of them minor and of the type that you’d quickly get used to and term quirky more than anything else. I found that the Auto start-stop is too quick to kick in and too slow to respond when you want to get going again. Likewise the new generation City Safety gave me several scares with warning alarms going off and brakes being applied pretty much at the same time that I as a driver have picked up the issue… There’s nothing more disconcerting than hitting the brakes hard to find they’re not responding because the car has already done it for you. The new IntelliSafe package comes standard with the XC90 and offers new auto-braking at intersections as well as Run-off Road protection which arms the vehicle safety features to minimize occupant injury in the event that the vehicle detects the wheels leaving the road for whatever reason.

And I have to make a note on fuel economy when talking about the new XC90. Remember that this is a massive vehicle powered by a mere 2litre 4-cylinder engine. Hats off to Volvo for not allowing this to affect the driveability and performance of this vehicle. Aside from a more sluggish pull away, I found that the XC90 delivered more than ample low-down torque power (up to 450Nm) to get me through most situations. Certainly the steep ascents around my hometown were no problem at all for this hulking beast. All in all, we managed a moderate 10.2L/100km on the 71L diesel tank on very mixed driving. Volvo’s claim of the XC90 being the cleanest and most efficient 7-seater SUV available on the market certainly holds true in this instance.

The XC90 is the first of Volvo’s models to use its Scalable Product architecture. Effectively, this means that all future Volvo models will be built upon the same chassis framework which can be scaled to suit different lengths and build sizes. A huge step forward for Volvo on being more cost efficient in their production. One wonders if this will reflect in future Volvo prices?

All in all, I’d like to commend Volvo on this new model. I was really looking forward to seeing it and frankly, I am definitely not disappointed. So if you’re looking for class, impeccable safety record and spaciousness from your family-sized SUV, do give the XC90 some serious consideration. The XC90 is available from N$893 000 for this, the D5 Inscription model. Our model as tested with all the optional extras retails for N$957,700.