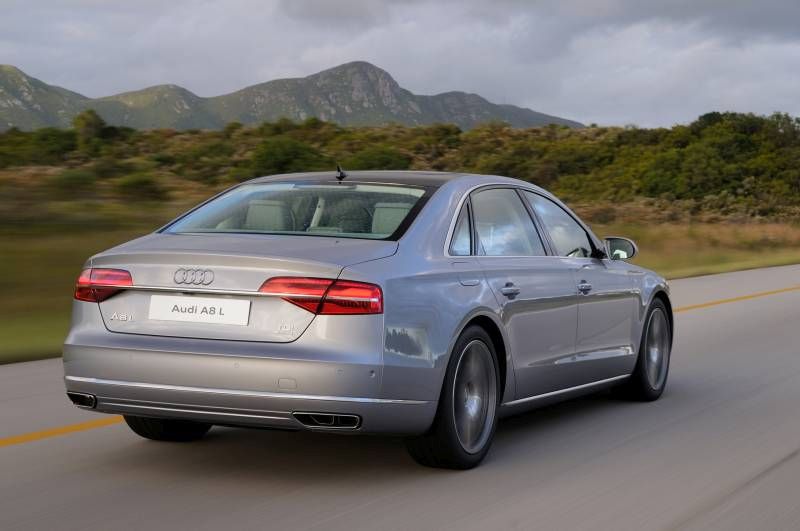 Do you remember Gerhard Schröder? The ex-Chancellor of Germany may be best known for his various policies and four wives but to me he’ll always be the guy who swapped the obligatory black Merc for an Audi A8. My family was equally impressed and to this day we still refer to any A8 as a “Schröder Auto”.

German top brass have been diligently swapping cars to show support of all their manufacturers because they all embody big luxury, excellent technology and understated style. The S-Class has traditional comfort, the Seven Series is bold and sporty while I believe the A8 sits somewhere in between.

The A8 can trace its roots back to the early eighties and the Audi V8, Ingolstadt’s first attempt at a large saloon which wowed the world with big power and Quattro all-wheel-drive. Mid-nineties it officially became the A8, followed by another generation in 2002 and this one in 2009.

So what you’re looking at now is not a new-new A8 but simply the existing model with crucial updates midway through its life cycle. In a nutshell, these include new lights and minor body work, updated interior trims and technology, as well as improved drive trains to re-shuffle the model line-up.

Those new headlights and slight body tweaks give Audi’s A8 a more taught and compact appearance than its dimensions suggest. At 5.14m length, 1.95m width and 1.46m height, it can easily compete with other big sedans and offer exceptional interior space; especially when ordered with an “L” behind its badge.

Its cabin also houses exclusive materials and excellent build quality which, rejoice, can be ordered in different colours and trims with “Audi design selection” giving discerning buyers even more choice. The MMI navigation and infotainment system now also features a touch-pad for the creative amongst us.

Audi is quick to point out that the big car feels light and maneuverable on its tyres, and I agree, thanks in part to its Audi Space Frame construction. The body is almost entirely made out of aluminium and weighs just 231kg, a figure which helps most A8 models to roll off the scales near or below 2,000kg.

Casual observations we made at the A8’s launch is that its front end has lost most of its bulky presence in favour of a sleeker, cleaner face. In profile, the car disguises its size reasonably well with huge wheels. Big, flush exhaust outlets and sweeping, directional LED indicators accentuate its rump.

The headlights come in either full Xenon or full LED technology with an optional Matrix LED system which keeps lighting at its optimum without blinding other road users. Its 25 individually operating LED’s can produce thousands of light beam combinations, use navigation data and recognize up to nine vehicles.

Two diesels start the range – A8 3.0 (V6) TDi Quattro and A8 4.2 (V8) TDi Quattro – with two petrol models arriving next month: the sportier S8 and flagship W12 long wheel base. All TDi A8’s can be ordered in normal or long wheelbase while VIP buyers may take delivery of the armored “Security” models later this year.