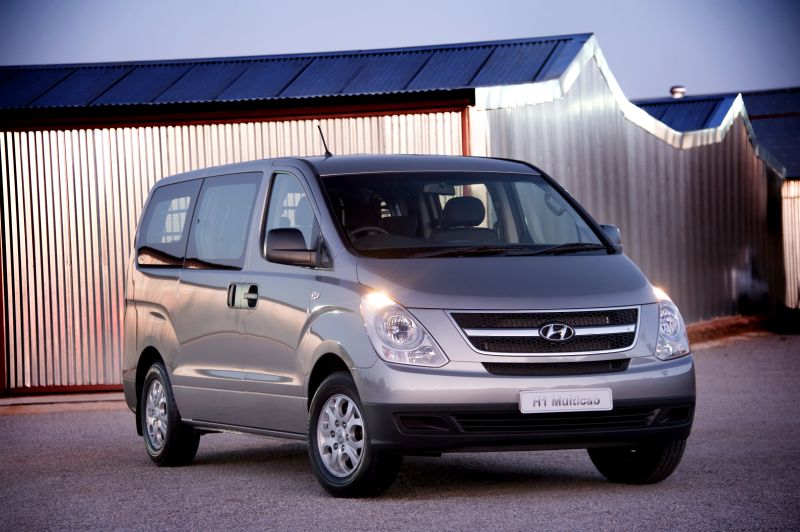 Monday, 23 January 2012, Kuils River. The glamorous honours of our first launch report for 2012 go to the decidedly unglamorous Hyundai H1 Multicab. Still, I encourage you to read on as this vehicle is big on space, big on versatility and big on value for money.

Casting another net in the general direction of our commercial vehicle sector, the multi-purpose MultiCab joins the luxury H1 mini-bus and no-nonsense H100 bakkie (which is exclusively driven by retired Formula One pilots) as bait for company and fleet owners.

Based on its more luxurious H1 brethren and much like its name would suggest, the Multicab splits the cabin in two unequal parts. The front two-thirds, despite being a low-rent version of its donor, are meant for human occupation while the remaining third is purely for cargo.

The hard vinyl floor, sturdy divider, split swing doors and barred windows will allow passengers, but only of the desperate kind. Think two seasoned motoring hacks who can’t be bothered waiting for the next shuttle. Another suggestion included painting the MultiCab yellow and giving it to the cops on a Saturday night.

No, really. It ‘s much bigger than a boggo Toyota Hilux with canopy and chicken-wired windows so the H1 MC would make in ideal vangwa. The front will take up to six brave defenders of the law while the rear should house, depending on your Tetris skills, four to eight dangers to society.

The constabulary may delight in power steering, power windows, air-con, 2-speaker radio with USB/aux/ipod input, two airbags, ABS, EBD, plenty of seatbelts and cup holders. The only glaring omission is power mirrors, a highly annoying oversight in a vehicle which will plainly swap drivers on a regular basis.

Should all citizens be on their best behaviour, the fuzz could elect to patrol their beat with a German Shepherd bouncing around the back. The top part of the partition is glass, as are the side windows, to aid visibility. None of them can be opened though, so they’ll have to install a turny air vent for Rex or the crims.

Maximum payload is 1,100kg (or 2,500L of space) thanks to tough leaf springs with oil damper helpers in the rear suspension. The 50/50 split rear doors allow easier loading by opening sideways instead of upwards (like the H1’s single door) but leave the driver with an annoying divider down their rear view.

A few plus points of the H1 MultiCab are its fantastic 5.6m turning radius and obedient controls. It’s slightly jittery at slow speeds, especially when empty, just like a double-cab bakkie. In fact, one cheerful Hyundai exec called it a big double-cab with integrated canopy.

However; the rear-wheel drive H1 MC competes directly with Mercedes’ Vito and Volkswagen’s Transporter. It trumps them in various departments like payload, spec, visibility and price; especially when compared to the traditional boxed-up panel vans.

The Hyundai also offers the only petrol engine in this segment, a 2.4L four-cylinder with 126kw (171hp) and 227Nm. Its counterpart is a 2.5 turbo-diesel worth 125kw (170hp) and 392Nm. The petrol is only sold with a five-speed manual and the diesel only with a five-speed automatic gearbox.

Thanks to the TD’s masses of torque, this model is also fitted with ESP stability control. Fuel tank size is 75L of which the petrol will use an average of 10.2L and expel about 240g CO2/km. The Desiesel motor with auto’box uses an average of 9.7L/100km and spits out roughly 257g CO2/km.

Prices are N$279,900 for the petrol and N$339,900 for the diesel, that fantastic five-year/150,000km warranty is included, as is a five-year/90,000km service plan. The German-dominated market shifts roughly 50 units a month, of which Hyundai is aiming to nick about five per month; for now.

So there you have it – buy an H1 bus if you need lots of seats in luxury. Buy the MultiCab if you need to ferry around crew and cargo. It may only be available with grey cloth interior and a choice of two body colours, but the H1 MultiCab makes a lot of sense.