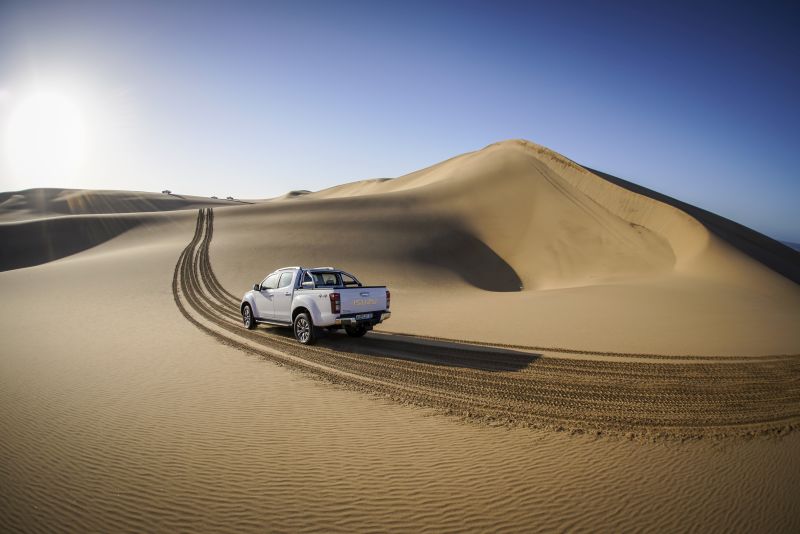 Eager show off its updated KB, Isuzu invited us for a launch in the Namib!

General Motors South Africa were kind enough to take a handful of motoring journalists into the dunes of the Namib for two days to sample the all new Isuzu KB300 to see ho wit stacks up against not only the competition, but its older brother.

We were met at the Walvis Bay airport by the friendly General Motors and film crew, where we were given a choice of either a double cab or extended cab; some in manual, some in auto guise.

A 30km gravel road to Rooibank was to be the first experience in the all new KB and as far as first impressions go, this was a good one.

The new Isuzu is nothing more than a facelift; a new front facia, reshaped load bin lid (with the rear view camera now moved into the handle moulding) and all new spoked alloys take care of the exterior changes. This means the new KB still has those great road handling manners we
came to like from the pre-facelift model.

The KB300 feels planted to the gravel surface at the 80km/h district road speed limit and slightly over. I’m sure, however, it is equally solid at higher speeds when all four wheels are engaged. Changing from 2H to 4H can be done at speeds up to 110km/h via a selection dial on the centre console while 4H to 4L is limited to 15km/h transmission in neutral.

Body roll is hard to induce and the cab stays fairly level through cornering. It is, however, easy to step the tail out with the traction control system turned off fully; but it remains easy to control throughout the slide. As with the suspension setup, the motor has been left untouched and still produces 130kw and 320nm of torque that peaks at 2,200rpm.

Power delivery is smooth and on tap when needed. Turbo lag seems relatively minimal for a high capacity diesel motor, perfect for conquering the dunes of the Namib or curb jumping at your local mall. With the tyres deflated to 0.8 bar, the new KB300 has no issues climbing up steep dunes if taking the correct line.

It is possible to get the KB stuck, but more often than not, it stems from driver error and not a lack of power. Diesels can be notoriously tricky for dune excursions, but shift to third gear and the KB300 merrily cruises along at 1,600rpm, just before the turbo swings into full boost, giving you ample oomph to power up big sand heaps.

This leaves the driver with nearly 2,000rpm worth of steam to crest some of the higher dunes near Walvis Bay as power tapers off at 3,600rpm. The interior has also seen a slight refresh. The instrument cluster is all new and integrates a shift indicator for optimal shifting and passive entry with a Stop/Start button as well as touch screen navigation which now comes standard on LX models and includes Wi-Fi Connectivity.

The six way electronic adjustment feature on the (optional) leather seats gives the driver enough movement to get an optimal driving position, so important when traversing down the slip-face of a dune.

The KB’s cabin is still mostly made up of hard plastics, but fit and finish appears to be good. Honestly, there’s little separating the cream of the crop in this segment and it all comes down to personal preference and small details.

If the Isuzu KB300 is yours, it’s a great one; it performs fantastically, looks good and comes in slightly cheaper than a comparable Hilux. Isuzu have also proven their commitment to client service by scooping the IPSOS award in June of this year and, most importantly, it’s available in some great colours other than white.