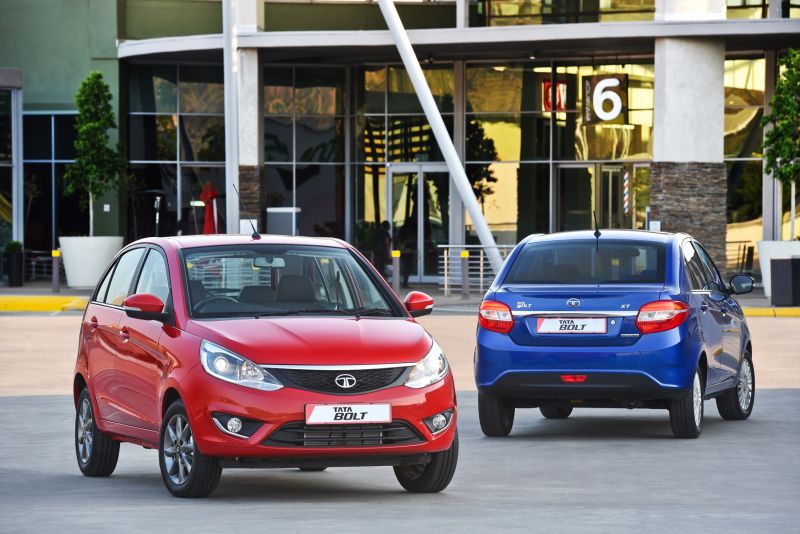 New Tata is a Bolt of a surprise!

The newly-arrived Tata Bolt range of passenger cars is going to inject a healthy dose of brand perception-change in this country because of its much improved European styling, quality finish, ride quality and cabin comforts which the brand has lacked to date.

The new Bolt is available in hatchback and sedan and a choice of two specification levels, XMS and XT, with only N$10,000 separating the two, because many features are standard across the range.

This is the first important step in the Indian manufacturer’s strategy of launching new passenger vehicles and it slots into the most competitive sub-N$160,000 slot in the local market. Competition in this segment is particularly tough with representatives frommost strong brands pushing for market dominance.

Tata still has the weight of so-so quality to carry but now, for the first time, is has stronger cards to play than just affordability. Although it has only sold just over 60,000 vehicles since coming to South Africa 11 years ago it has big plans for the future, inter alia, a campaign to
create wider local awareness for the brand and also to improve the quality of its aftersales service.

Key factors favouring the Bolt’s success include its competitive pricing, a choice of four models, an impressive list of standard equipment (in particular the infotainment) and ride quality, all of which moves it closer to price-similar competitors from Europe, Korea and Japan.

I drove both versions at the media launch, and of the two, I prefer the hatch, which most Namibians and South Africans will probably go for as well.

Styling is easy on the eye, except for the small wheels (only 14-inch on the lower model)which are further emphasised by a high-ride body.

Make-up includes the body coloured side mirrors and door handles, LED indicating lights, high-mounted brake lights, shapely rear light clusters and a spoiler which adds a touch of sportiness; this should appeal to younger buyers.

The quality of the cabin is a marked improvement on Tata cars of the past, although there still is a scattering of clack-clack plastic trim around.

The spacious black interior of the Bolt seats up to five adults, with claimed class-leading legroom for the rear occupants. Maximum luggage capacity is quoted at 210 litres for the hatch and 360 litres for the sedan.

Layout and treatment of the Bolt’s instrument panel have upmarket touches, no doubt thanks to the influence of the Jaguar and Land Rover style division in Coventry. Air-con is standard, as are power windows and mirrors, adjustable headrests, central locking as well as remote fuel
and tailgate opening.

The star of the living quarters is the Hamman infotainment system (including a touchscreen on the XT) USB/iPOD connectivity, speed dependent volume, multi-function steering wheel, Bluetooth connectivity and more.

The ride quality and the good cabin insulation add to the pleasure of the Bolt’s ride. The electronically assisted and speed sensitive steering is
noticeably sharper than on previous TATA cars. The Bolt feels stable on the trot.

It is steady and easy to drive, even on our neglected roads, and predictable through the twisties, even when it’s being hustled along. Some of my fellow motoring scribes felt the engine was a touch lethargic but to me the 1.2-litre turbocharged engine’s 66kW and 140Nm provide
enough gallop, although this impression might change with four occupants and a full load of luggage aboard.

The five-speed manual gearbox transmits its power to the front wheels and it is a good partner to the engine, even though the highest cog is designed more for frugal fuel consumption than keeping up a rapid pace.

There are also three different settings for engine response, Sport, Eco and City modes with Sport as the default setting.

Rich comfort features include climate control on the XT (aircon on the XMX), electric windows (front and rear), electrically-adjustable exterior rear view mirrors and remote openers for the fuel flap and luggage compartment.

Safety features impressively include ABS with electronic brake distribution (EBD) and a corner-braking feature as well as two airbags, automatic door locking and daytime running lights. Vehicle security include an alarm and an immobiliser; as well as remote central locking.
All models include a five-year / 100,000km warranty, a two year / 30,000km service plan as well as five years of roadside assistance.