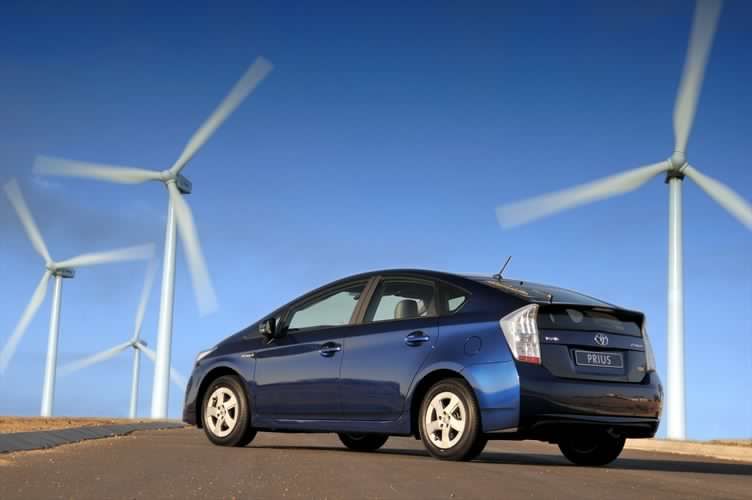 Four point five litres per hundred kilometres; that was the average consumption of the new Toyota Prius I recently drove for two days on its official launch. The third generation Prius will shortly be available from selected Toyota dealerships to maintain and build on its ecological and economical image. Especially the second model (2003) made the Prius into a runaway success, so much so that in April 2008 it smashed the one million sales mark since its first incarnation arrived in 1997.

Yes, it can be seen as a politically-correct mode of transport favoured by the famous and film stars, but I think of this as a positive point. And all the negative comments about Prius’ consumption can easily be blamed on misuse, as it can be (like we proved) highly economical when you change your attitude and drive it properly.

Our route through the picturesque Overberg also included countless kilometres of dirt road, because Toyota SA wanted to demonstrate that a Prius isn’t afraid of the odd plaas pad. Just as with the previous generation, I was highly impressed with Prius’ comfortable ride, especially on dirt roads.

Like its two predecessors, the Prius has a regular gasoline engine and an electric motor. These two power plants work together by means of clever computer systems dubbed “Hybrid Synergy”. Don’t be afraid of it, the Prius still drives like a normal car.

You may gladly view it as a regular petrol-engined vehicle with an electric helper, and I’m always impressed when I drive a Prius because the technology works surprisingly well! And you don’t have to drive like a pensioner; we always travelled at the posted speed limits and often put foot, but still managed 4.5L / 100km.

The two engines both send power through the CVT gearbox to the front wheels, but often the Prius will only utilise its electric motor. These miles are clean and free, because the motor recharges its big battery in various ways.

These include the brake system that transforms negative momentum into battery charge, and rolling resistance (e.g. rolling down a hill) will also put more lines on the digital picture of Prius’ battery. Behind the wheel your perception will quickly change to generate more of this “free energy”, which obviously reduces your fuel consumption and CO2 emissions.

Its electric companion is smaller, lighter and more effective with 60kW (10kW more than before) but 206Nm as opposed to the previous model’s 400Nm. Yes, I was also somewhat surprised. But the big wigs at Toyota explained that less electric power gives you more reserves and makes the power delivery less hectic.

Other improvements to the Prius are its unbelievably low CO2 output of 94g/km (9.6% improvement to Prius II) and an average fuel consumption of 4.3 L/100km (4.7% better). This is due in no small part to Prius’ new battery and computers that are lighter, smaller, and better ventilated. They are hidden under the boot and still leave room for a full-size spare wheel.

The body of Toyota’s hybrid hasn’t changed drastically, but shows a few new elements to help its economical nature. The drag coefficient now sits at 0.27cw and the biggest changes are new headlights and combined fog and indicator lights at the front.

On the inside Prius supporters will quickly discover the new design which now blends in better with that of its other Toyota stable mates. The big information display (as also featured in Lexus’) was traded for more conventional sound system and ventilation controls, and the hybrid information is now part of the digital screens nestled underneath the large windscreen.

That is also where Prius buyers will discover an adjustable heads-up display that spits out speed and consumption numbers, and navigation in the Exclusive model. But this will only happen when you step on the brake pedal and press the Start button.

Should there be enough juice in the battery, Prius will not engage the petrol engine and will even pull away in electric silence; if you’re not in a hurry. The vehicle also has an “EV Mode” which, battery charge allowing, only uses the electric power plant at speeds under 40km/h.

A “Power” button gives drivers slightly more responsiveness from the engines, but the Prius prefers its “Eco” button which is the hybrid’s default and everyday setting. Have I already mentioned how impressive all this technology is?

More peace of mind is offered by Prius’ 3 year 100 000km warranty, and 5 year or 90 000km service plan. The Advanced model costs N$326 200 and an Exclusive model (with LED lights, navigation, hard-drive, voice recognition and parking assistant) will cost you N$370 700. Prius is available in 8 colours and I highly recommend “Pearl White”; because green isn’t available.