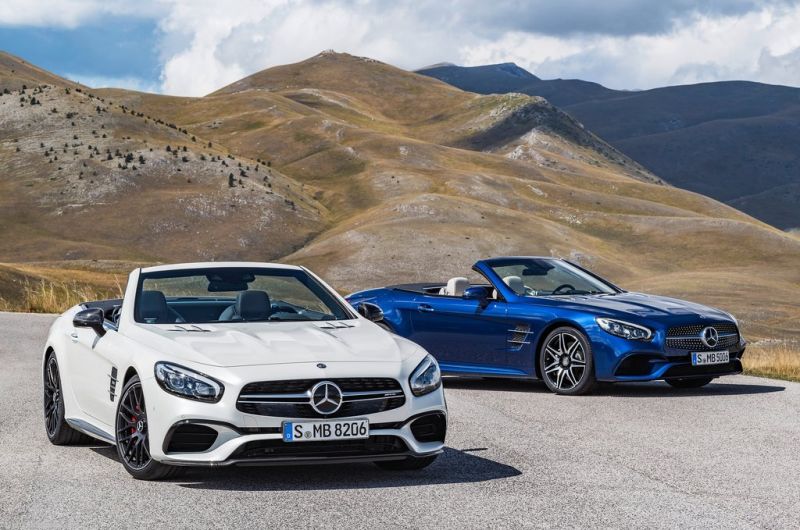 There are cars with lots of history, there are cars with a few generations of ancestors, and then there’s the Mercedes-Benz SL. The drop-top from Stuttgart with “Sport Leicht” on its rump can trace its ancestry back further than most modern automobiles.

Here’s where it all started. Made from Daimler’s 1950’s race cars, the 300SL coupé with its tubular frame and “gull wing” doors quickly gave birth to the more affordable (but still jolly expensive) 300SL roadster. Prices for the coupé have long passed 1 million US$.

Born out of necessity for the booming market in a post-war era of prosperity, the “little SL” was only made as a 190SL and often falsely accused of being the “lady’s roadster”. What they lacked in speed, these SL’s made up for in grace, style and a good dose of reliability.

Eventually gaining the nickname “Pagoda” SL because of its concave, pagoda-like, removable hard top roof, the W113 had big shoes to fill because it replaced both the legendary 300SL range and the smaller Type 190SL. It did so with understated style and good performance.

Early in the 1970’s, the new SL range was unveiled to instant success and this model would go on to be one of the longest-produced Mercedes models of all time. The R107 “Bobby Ewing” SL (from the hit TV show Dallas) was built for an almost unprecedented 17 years.

Just in time for the modern 90’s, the sleeker but more humble R129 series brought new technology and power with it. From ABS brakes, an automatic roll-over bar, electric soft top and fully integrated safety seats to new multi-valve engines and even a 6-litre V12!

At the start of the new millennium, Mercedes-Benz brought even more safety, luxury and innovation to the SL badge. The R230 boasted with advanced driver aids, refined drive trains and more luxury gadgets. This was the first SL with a folding metal roof.

The current range was updated (facelifted) a year ago but is a soft evolution from the previous model. Everything has been made more efficient, lighter and easier to use. The R231 is everything the modern SL should be – fast, comfortable, safe, efficient and stylish.

This article accompanied our Mercedes-AMG SL 63 article in a recent print edition of NamWheels. All images were sourced from (and are copyrighted by) Daimler AG.