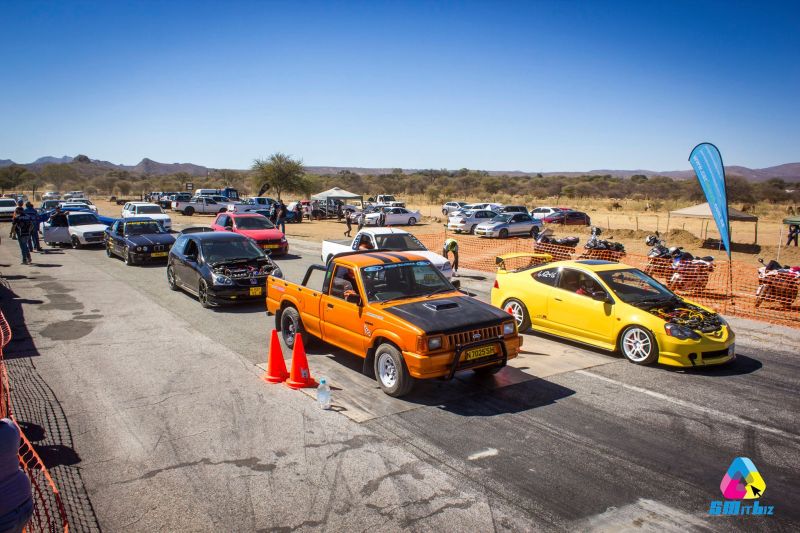 Serious machines, superbikes, a whole lot of fun and a new Namibian record!

Team RMC of Namibia with Speed & Sound hosted 16 fast cars from South Africa at the recent ‘DRAG WARS’ held at an airfield in Okahandja on Saturday 23 July 2016. This was the third installment of this amazing cross-border saga between Namibia and South Africa and, quite fittingly, took three months to plan and organise.

As you can probably judge by these photos taken on the day, both the competitor and spectator turn-out was fantastic and the day was jam-packed with drag-racing action, including a brand-new Namibian record! But more of that later…

The event saw official “Nationals leg 4″ and privateers compete together with an impressive line-up of cars from South Africa and was crowned by a Speed ‘n Sound scouting at Windhoek’s Action Arena in the evening of the same day. The well-known South African magazine was scouting for feature rides to include in future editions.

There were some seriously fast cars, and DRAGWARS was even graced by expensive supercars – including a McLaren and Nissan GT-R! And let’s not forget the line-up of superbikes that also competed.

One of the event’s main organisers, TeamRMC, shared this with us: “So the day finally arrived yesterday. After three months of planning we could make Drag Wars happen. The third and very special installment…”

1. The most ever entries recorded at any of our events.
2. The most cars from South Africa ever brought up to participate at any of our events.
3. The widest range of cars ever seen at an official drag meet….from a 1.6 bakkie to a McLaren supercar.
4. The most 10 second runs ever seen in Namibia.
5. The first Namibian ever to run a 10 second quarter-mile.
6. The first time a Namibian driver puts up the fastest time of the day. Huge Congratulations to De Waal Theunissen on your 10.4 second run!

And a big thank you to our South African guests, the Speed and Sound crew, our Namibian Race Team, our sponsors and partners, spectators, supporters and most of all, Team RMC for making this happen!”

If you like our work give us a shout for a quote and remember to visit our Facebook page (search for ‘Smit Biz’) to view our DRAGWARS gallery with over 370 high-resolution photos!